Did the Buddha speak the Mahanidana Sutta in the Digha Nikaya?

In the Pali suttas, there are scores of suttas about Dependent Origination which take the classic form of the 12 links, the benchmark being SN 12.2.

In the Digha Nikaya, there is the Maha-Nidana Sutta, called the 'Great Cause'. I find the name of the sutta strange since if it is 'great', why are there only 9 links instead of 12?

While there are many suttas containing less than 12 links, it seems strange the Maha-Nidana Sutta omits the six sense spheres, which the Buddha described as one of his core teachings in AN 3.61 & are central to so many suttas on Dependent Origination (such as MN 18, MN 38, MN 148, etc).

Are there any compelling reasons or grounds why Buddhists should accept the Maha-Nidana Sutta of the Digha Nikaya as the words of the Buddha?

It is true that Maha Nidana Sutta in the Digha Nikaya points out Paticcasamuppada (the process of Dependant Arising), and of Nāma-kāya Rupa-kāya - (mentality and materiality) together with vinnana (consciousness) somewhat different to some other suttas. Paticcasamuppada is the most important of all other related teachings. It is a deep and complex doctrine, and understanding this is Key to seeing the Truth. So one cannot rule out Maha Nidana Sutta in the Digha Nikaya by just such observations as that you’ve pointed out. We should remember well Buddha’s words:

By not understanding, and not penetrating this doctrine of Paticcasamuppada, beings have become entangled like in a knotted ball of thread and have become like munja grass and rushes, unable to pass beyond the woeful states of existence, and Samsara, the cycle of existence.

For Buddha to exclude Ignorance, Volitional Activities, and Six sense-bases, there is a reason. It is just that you and I have not yet found out as to why it is so. In Maha Nidana Sutta it is said:

It was shown thus because one cannot exist without the other. The Buddha showed this with an example of two bundles of reeds to make it easy to understand. Two bundles of reeds are kept on the ground with a little space between them leaning against each other with their top ends, that both the bundles are kept standing with the support of each other. Removing one removes the other.

I will try and find the answer to your question within the month, but let us keep in mind that learning is a gradual process. The Buddha said that his method is gradual training, gradual action and gradual practice. So I will look into ‘Pancha Bhaya Wera Sutta’, ‘Nalakalapa Sutta‘, ‘Loka Sutta’, ‘Maha Nidhana Sutta‘ etc. on Paticca Samuppadaya.

Until we find a proper answers let us not discard any of the original suttas. Let us not put away what we feel are contradictory statements till we have understood thoroughly the fundamentals. Only if when we detect the structural principles of such paticcasamuppada links, in the entirety of the teaching, then you would have arrived at the true Dhamma. So let us try to dig a little deeper.

But the difference in between SN Suttas and DN Maha Nidana Sutta is target audience and initiative question.

"It's amazing, lord, it's astounding, how deep this dependent co-arising is, and how deep its appearance, and yet to me it seems as clear as clear can be (it seems very easy to understand for me)."

A sotāpanna doesn't actually have a view about self (sakkāya-ditthi)

Instead sotapanna person has Samma Ditthi which is deeply discoursed by Sariputta in MN 9: Sammaditthi Sutta. In this sutta,

Saying, “Good, friend,” the bhikkhus delighted and rejoiced in the venerable Sāriputta’s words. Then they asked him a further question: “But, friend, might there be another way in which a noble disciple is one of right view…and has arrived at this true Dhamma?”—“There might be, friends.

This means six bases is a bridge between Contact(Phasa) and Nama-Rupa(Material-Mental). Five bases of Rupa (Material POCs) and one base for Nama (Metal POC) is indirectly discoursed in Maha Nidana Sutta. The logical assumption about not discussing six bases in link was Ananda probably had well understanding on six bases by Samma Ditthi (without self-view, Sakkara Ditthi). On his question Paticcasamuppada was easy to understand we can deduce that Venerable Ananda had Vijja and got rid of Avijja since he first joined Sanga. So Gautama Buddha did discourse without discussing Avijja as well as Sankhara (which is closely related with Avijja).

In conclusion, Maha Nidana Sutta is highly tailored to Venerable Ananda who was already sotapanna person so it is safe to exclude Avijja (Ignorance), Sankhara (fabrication, formation, Constructing activities) and six bases. 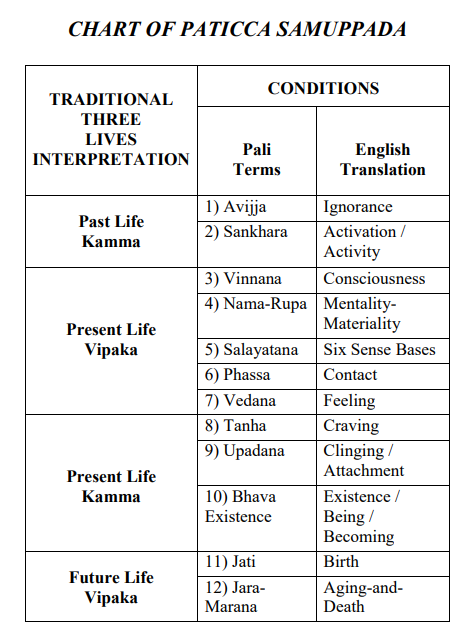 As there cannot be Phassa without Salayatana this is implied as sense-object, sense-door, and sense-consciousness are all needed. In the Vipaka cycle (see diagram above), the most important is Passa and Vedana any other elements can be omitted.

The Sutta also omits the past.

descend into the womb of a mother

Without a womb or being born with a physical body there cannot be Nama-Rupa or Salayatana which is needed for Vinnana to exist.

Are there any compelling reasons or grounds why Buddhists should accept the Maha-Nidana Sutta of the Digha Nikaya as the words of the Buddha?

This is a simplification of the 12 link sequence hence there is no reason to dispute this is not the words of the Buddha.

13
Did the Buddha speak Pali? Are the suttas his word verbatim?
3
Is there a contradiction in the translation of the Bhūmija Sutta?
1
Western scholars: Did the Buddha not speak the Digha Nikaya?
0
DN 15: Whose or which consciousness enters the mother's womb?
0
Understanding Saṅkhāra in dependent origination as *choices* of body, speech and mind?
0
Dependent Origination, 'here-&-now' & 11th & 12th link
2
What does "becoming" mean in the phrase "the 10 fetters of becoming"?
1
Did Buddha endorse caste system in kannakathala sutta