How to identify a sotapanna (stream enterer)

I just wan to know whether there are any measurements advised by the Buddha to identify a stream enterer (sotapanna). I know for a fact that from the stream enterer and above, all four types have given up on self doesn't tell that he/she is enlightened or in this state or not.

So how are we to find these noble people? Are there any instructions and where is it cited?

I have posted this book before, here it is again: Sotapanna Handbook (or available here).

It's a compilation of 50 or so suttas where Buddha mentioned stream-enterer (free from publisher).

Yes, Buddha gave us tools to measure ourselves. Please notice that there is no tool to measure other people's progress. Only Buddha had that quality, not even his great disciples ever proclaimed progress in others.

And for reference why one should not judge other's progress (stream-enterer, once returner, etc..) is from Migasala Sutta, Buddha told Ven. Ananda

"I alone, Ānanda, can measure their measure or one like me."

The reason i feel it should be told because some teachers would proclaim their students to be such and such for some other questionable purpose.

Ananda visits Migasālā in her home and is questioned as to why both Pūrana and Isidatta, the former of whom was a brahmacārī and the latter not, should both have been born in Tusita, as sakadāgāmins. Ananda offers no explanation, but consults the Buddha, who declares that Migasālā is but a foolish, frail, motherly body with none but mother wit; how, then, could she understand the diversity in the person of man? (purisa-puggala-paropariyañāna). The Buddha then goes on to divide men into six classes according to their capabilities and attainments. It is not possible for anyone, save a Tathāgata, to measure persons.

To find or identify noble people can be difficult, even impossible, because you yourself must have some idea about the True Dhamma to be able to do this. Therefore, a problem arises similar to the question of: "What occurs 1st, the chicken or the egg?"

The Canki Sutta provides the following preliminary answer to the question:

How is truth discovered? There is the case, Bharadvaja, where a monk lives in dependence on a certain village or town. Then a householder or householder's son goes to him and observes him with regard to three mental qualities — qualities based on greed, qualities based on aversion, qualities based on delusion: 'Are there in this venerable one any such qualities based on greed that, with his mind overcome by these qualities, he might say, "I know," while not knowing, or say, "I see," while not seeing; or that he might urge another to act in a way that was for his/her long-term harm & pain?' As he observes him, he comes to know, 'There are in this venerable one no such qualities based on greed, hated & delusion. His bodily behavior & verbal behavior are those of one not greedy, hateful or delued. And the Dhamma he teaches is deep, hard to see, hard to realize, tranquil, refined, beyond the scope of conjecture, subtle, to-be-experienced by the wise. This Dhamma can't easily be taught by a person who's greedy, hateful or delued.

...in the course of the future there will be monks who won't listen when discourses that are words of the Tathagata — deep, deep in their meaning, transcendent, connected with emptiness (sunnata) — are being recited. They won't lend ear, won't set their hearts on knowing them, won't regard these teachings as worth grasping or mastering. But they will listen when discourses that are literary works — the works of poets, elegant in sound, elegant in rhetoric, the work of outsiders, words of disciples — are recited. They will lend ear and set their hearts on knowing them.

Today, many Buddhists claim to study words from the Buddha only but when these individuals explain the core teachings, such as Dependent Origination, their explanations do not accord with a dhamma that "can be experienced for the wise for themselves" (per the Canki Sutta) or that are "connected to emptiness" (per the Ani Sutta). Instead, their explanations are "within the scope of conjecture", namely, unverifiable speculative theories about an unknowable past & future.

In summary, if you yourself are not a stream-enterer or are not well versed in the teachings of the Buddha, you probably cannot measure if another person is a stream-enterer, regardless of how virtuous that person may appear externally.

i thought i remember i read a sutra that say whoever come across this sutra is a sotapanna and now i can't remember where i read it from. but does it matter that much to find a sotapanna? wasn't it better if you concentrate on cultivating yourself because you may have already encounter some in your present life. Stream entrant are said to have unshakeable faith in buddhism , doesn't that mean if the stream entrant has already meet buddhism, you are most likely to meet them where the buddhists assembly will gather?

i am apologizing if what i wrote here is offending anyone. communication is not my strong point.

Added note: if anyone was thinking about reaching sotapanna earlier there is this samanthabadra text that if one listen recite by a qualify person, one can reach the stage of within three lifetimes. so it might be a good idea to listen to this once so that in future lifetimes it will be easier for one to attain the three lifetimes (unless you had a commitment with your guru, you may need to ask your teacher) https://www.youtube.com/watch?v=8W91pUTf2Jc&t=37s&list=PLjUJNKDN2ecAZtNHQElrb591QmSj_3z-9&index=41

another two i believe that help me in my buddhist path is both om mani padme hum and tara mantra in which i think tara mantra really helped one in attain spiritual path faster. i was relying on tara mantra to help get out of my bleak circumstances and to see if it can set my wealth path right on the track, although not much changes in my worldly life (but i still think it has probably help me out numerous time in very difficult and challenging situation), my spiritual buddhism path seem to progressing so fast by leaps and bounds as if there is no tomorrow.

added note 2: found a sutra that help one to attain stream enterer stage known as sanghata sutra. anyone who can read this sutra is consider rare. and do be open minded when reading this sutra. http://fpmt.org/education/teachings/sutras/sanghata-sutra-in-various-languages/

In Udana 7.2, Ven. Sariputta (the Arahant) tried to teach Ven. Bhaddiya without realizing that he too was an Arahant.

The Buddha saw this and exclaimed the verse, describing Ven. Bhaddiya:

He has cut the cycle, has gone away to freedom from longing. The dried-up stream no longer flows. The cycle, cut, no longer turns. This, just this, is the end of stress.

This shows that only a Sammasambuddha has the psychic or supernatural ability to recognize the attainment of others. Even one Arahant cannot recognize another Arahant.

The stage of enlightenment can be identified by the presence or absence of each fetter. In the case of a Sotapanna, it is the absence of the 1st 3 fetters: 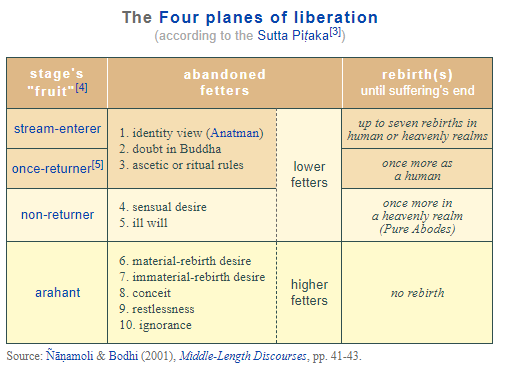 I am a sotapanna. When I started my journey in Buddhism 16 years ago I would search the internet looking for confirmation. That yes: this is possible for me. I would go seraching "Enlightened Beings", "Where can I find an Enlightened Being" and such. Sadly, I could find very little. So I was left with reading the suttas. Misinterpreting them. And really left to struggle badly until I came across Mooji on Youtube about 3 years ago. THats where my life took a radical shift. I had always had a serious "spiritual" bent, but I could neveer gain a solid footing in it. It seemed as if any progress I would make would be washed away by the 'world'. So I would spend my evenings building up my 'metta' and it would be washed away by the happenings of the 'worldly people' (I realize now, that it was only my mind that was unstable, but I'm digressing). So I did not really gain a solid footing in spirituality until i met Mooji on Youtube. It was being in the presence of a real live Master that I believe completely shifted my life from an aspirant to 'established'. I felt like I had found a solid ground to rest upon. So when I realized the true nature of reality: That I am Nothing, That everything comes from Nothing Including "Me",That Emptiness the Basis of Everything, I decided that I want to make myself available. I didn't want to hole up in a cave in the Himalayas and meditate till I die. (Although that feels really tempting some days). So here I am

Not the answer you're looking for? Browse other questions tagged enlightenment nirvana stream-entry arahant sotapanna or ask your own question.

3
Characteristics of Sotàpanna person (Stream Enterer)
4
Does "stream enterer" simply mean "devout Buddhist"?
3
What are Ekabiji?
6
Stream winner reborn as human
4
Role of IQ in attainment of stream entry
5
Too much Dhamma in modern age
2
Is become a stream-enterer (sotāpanna) enough?
0
Reincarnation of a Sotapanna person (Stream Enterer)
0
Minimum common grounds for all sotapanna and all arahant
2
Confusion about Stream Entry