Did The Buddha promise to send a Paracelete, or Holy Spirit?

In page 32 of The Pagan Christ, Tom Harper writes:

"The Buddha, when he prepares to depart, promises (like Jesus) to send the Paraclete, "even the spirit of truth which shall lead his followers into all truth.""

I followed the footnote and found the footnote simply adds other information about other claims, but does not refer to the source of the claim. I also googled and didn't find original source material supporting this claim. I think the difficulty is I don't know he exact words to search for. Perhaps a knowledgeable person here would know where this claim comes from.

I think the short answer might be "no" -- more-or-less as argued in this review of the book:

Oh no! I found some errors in scholarship here. Tom Harpur's "Pagan Christ" is based on the idea that Christianity borrowed beliefs from paganism. Many scholars have argued in favor of this during the Victorian era and even into the early 1900's.

Many thousands of books by scholars later, the idea has been soundly refuted. [etc.]

Buddha "promises to send the Paraclete" (p 32). Buddhism began as a religion without a god, let alone a paraclete.

To post a longer answer I'll try to reference Buddhist scripture and find some parallel in it.

I think of the Mahāparinibbāna Sutta (translated here and elsewhere) as narrating what the Buddha said "when he prepares to depart".

The closest approximation I remember to "sending the Paraclete" is this passage:

Then the Buddha addressed Venerable Ānanda:

“Now, Ānanda, some of you might think: ‘The teacher’s dispensation has passed. Now we have no Teacher.’ But you should not see it like this. The teaching and training that I have taught and pointed out for you shall be your Teacher after my passing.

Apparently the word paraclete means "helper" or "consoler" -- I guess you could argue that (and especially in context) that's analogous to what the Buddha was saying there -- that the dhamma-vinaya would be teacher, and helper, and consoler.

Furthermore I think that according to the Christian doctrine it's the Holy Spirit that allows Man to understand the teaching (of Christ and of the Church). There might be some Buddhist equivalent to that -- e.g. that there is a doctrine and a belief, which can and should be understood, and that doing so is a bit super-mundane. I think that if you read more of DN 16 you'll see the Buddha is saying that he has already taught, and in fact that the monks listening to him had already understood (and not saying he was going to send more in future).

There other other schools of Buddhism, e.g. with another version of the Mahāparinirvāṇa Sūtra which I won't try to analyse here.

And some of them might appear to be making promises of future aid, see e.g. Maitreya.

If Tom Harper's footnote isn't helpful then perhaps it's impossible to know what reference his claim is based on, if anything.

There is for example a book from 1896 titled The Gospel of Buddha. Its account includes,

And Ānanda, suppressing his tears, said to the Blessed One: "Who shall teach us when thou art gone?"

And the Blessed One replied: "I am not the first Buddha who came upon earth, nor shall I be the last. In due time another Buddha will arise in the world, a Holy One, a supremely enlightened One, endowed with wisdom in conduct, auspicious, knowing the universe, an incomparable leader of men, a master of angels and mortals. He will reveal to you the same eternal truths which I have taught you. He will preach his religion, glorious in its origin, glorious at the climax, and glorious at the goal, in the spirit and in the letter. He will proclaim a religious life, wholly perfect and pure; such as I now proclaim."

Ānanda said: "How shall we know him?"

The Blessed One said: "He will be known as Metteyya, which means 'he whose name is kindness.'"

So possibly the author got his statement from a source like that.

I think we're lucky, now a century or so later, that people have continued to translate the primary texts, so to some extent we can have translations that are more accurate or more literal and not just paraphrased to such an extent as before.

There are also modern teachers who give lectures or "dhamma talks" or who write books for a modern audience, but people can read the original scriptures too in translation (there was also a time when people's couldn't read the Christian Bible in their vernacular).

I think that that some of the early effort to bring Buddhism to the West was made by a group of people or learned society -- Theosophists -- who tried to find and teach what all religions had in common; which I guess might be nice, but some of the people closely involved with that effort decided that was at the expense of altering or misrepresenting specific religions, and so split from the group in order to promote the study of Buddhism itself.

There used to be a publication called "GOSPEL PARALLELS FROM PÂLI TEXTS." An edition can be read here from 1901:

Here is a picture of the linked document: 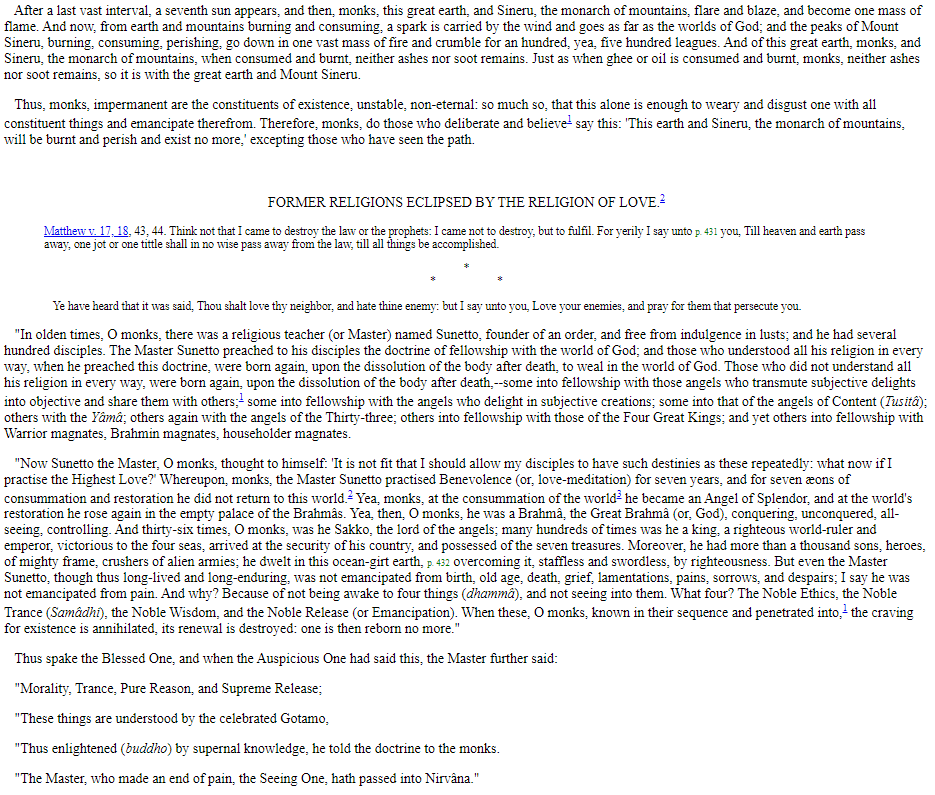 Notice how the text subtly implies a connection to the Book of Revelations and these passages from Pali texts? This was translated by a certain "Albert J. Edmunds." Also, it was actually rather common way back in the day to see "deva" translated into English as "angel." I believe there are translations by Rhys Davids that do this too. If anything, I think the connection with Jesus/"the Paraclete" comes from those practices stemming from loosely the 1890s when translators used to draw very open parallels between what they were familiar with, the Bible, and what they were unfamiliar with, these new texts coming out of Sri Lanka and Southeast Asia.

Incidentally, Mani, the founder of the Manichaean religion, believed that he had a divine syzygy in the form of the Paraclete sent by Jesus. Later on in his career, Mani reinvented himself various times -- sometimes as a Zoroastrian reformer, sometimes as a Buddha. So there actually was a man historically who claimed to be both the Buddha and the Paraclete, oddly enough. Did the Buddha send it? No. Parallels of the Buddha supposedly predicting Jesus or the Holy Spirit are based on, in addition to the old translations that say "angel" etc., mis-reading "Maitreya" as a generic deity of "loving-kindness."

Before his passing away, it is reported the Buddha is to have said:

One of the culminations of the the Noble Eightfold Path is Anapanasati; which is the manifestation of a special breath awareness (when there is right mindfulness) that leads to purification, enlightenment & liberation.

The breath is the spirit. The Bible reports Jesus breathed the Holy Spirit onto his disciples:

Again Jesus said to them, “Peace be with you. As the Father has sent Me, so also I am sending you.” When He had said this, He breathed on them and said, “Receive the Holy Spirit. John 20.22

Therefore, it appears The Buddha promised to send a Paracelet (comforter) or Holy Spirit to those who practise the Noble Eightfold Path. The Buddha said:

If a monk should wish: 'May neither my body be fatigued nor my eyes, and may my mind, through lack of clinging, be released from fermentations,' then he should attend carefully to this same concentration through mindfulness with in-&-out breathing.

Not the answer you're looking for? Browse other questions tagged buddha or ask your own question.