My thoughts don't happen to other people so why are they 'not mine'?

Considering the five aggregates and the sense in which they are all not-self. Thoughts (samskāra) are one of the five aggregates so they too are 'not me' or 'not mine'. In one sense this is a statement which accords with my own experience while on and off the meditation cushion. They display an impermanence and often they arising unbidden (or as part of a web of causal relationships that I don't control). In another sense however this doesn't accord with my experience. My thoughts don't happen to anyone else. They are thoughts in my head happening to me.

I know (well I think I know) the second statement is a wrong view. So why are thoughts not mine if they never happen to other people.

When speaking in conventional terms, i.e. "my, mine, they, others, people etc." we are dealing with conventional reality. Here concepts such as "a man, woman, an animal, a Self" etc. exist.

The reason why "your" thoughts do not happen to "other people" is because they are concepts.

If we instead construct the sentence in another way it might make more sense. The new sentence could be:

I hope this shed some light onto it. If i may give an advice from personal practice, then do not think too much about these things. Instead keep doing insight meditation as you also mention you do. The experiental knowledge you gain will cast away all illusions and concepts and lay bare the true nature of reality.

Lastly, i would like to point you to this dhamma talk by Ajahn Punnadhammo. Its called "Anatta". Very good talk.

I have attached a picture to illustrate what happens when we are "trapped" in conventional reality. The bottom of the picture is when one is without insight knowledge into the 3 signs of existence and thereby thinking one has a Self. When one begins practicing the path and gains insights then the breaking away of illusions and concepts happen like in the top of the picture. We become free from wrong view and gain right view. 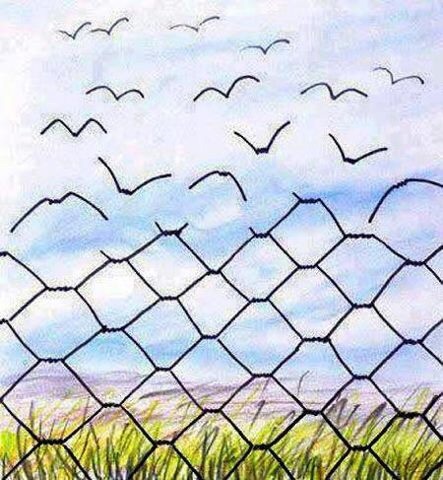 They are the thoughts that happen to you in particular, so indeed you have "your thoughts", but they are not "yours" in that you have no real ownership of them nor do they reflect your true self.

Wikipedia says (although these statements are unreferenced),

There are three ways in which self views could be conceived and all three are said to be wrong views.

All these views types of identity view fetter one to samsāra, and it is for this reason that they are wrong views.

No-self or Not-self? by Thanissaro Bhikkhu ends with,

In this sense, the anatta teaching is not a doctrine of no-self, but a not-self strategy for shedding suffering by letting go of its cause, leading to the highest, undying happiness. At that point, questions of self, no-self, and not-self fall aside. Once there's the experience of such total freedom, where would there be any concern about what's experiencing it, or whether or not it's a self?

"'What do you think, friend Ananda — Is consciousness constant or inconstant?'

"'And is that which is inconstant easeful or stressful?'

"'And is it fitting to regard what is inconstant, stressful, subject to change as: "This is mine. This is my self. This is what I am"?'

"'Thus, friend Ananda, any form whatsoever that is past, future, or present; internal or external; blatant or subtle; common or sublime; far or near: every form is to be seen as it actually is with right discernment as: "This is not mine. This is not my self. This is not what I am."

In summary perhaps they're 'not mine' because (or if) you choose to disown or not identify with them.

Also, perhaps such thoughts do happen to other people? The Dalai Lama for example says that he likes to see himself as being the same (composed of 5 aggregates) as every one else.

I'm not sure if this will help, but here goes. The reason the thought or anything isn't yours or mine, is because you can't control it, you can't keep hold of it. Trying to hold on to anything is like trying to grasp smoke in your hands, but, you can see the smoke- recognise the thought- but you can't hold or control it, so... can it or anything really be yours? Everything is just a sensation that will arise and cease out of your control.

"Thought" indeed arises and falls but where does "your" arise? "Your" only arises in conceptual reality. Your thoughts are not other people's and they aren't yours ultimately. Nothing is the possession of all beings and if we could all see that, we would all have everything. METTA

Suppose you have a big iron ball on which a bird comes and rests, stays some time and then goes away.

Is that bird yours?

Not the answer you're looking for? Browse other questions tagged philosophy anatman five-skandas or ask your own question.

11
What is the difference between non-self and emptiness?
4
Equanimity, aversion and anatta
3
Understanding anatta via "there are no computer programs" analogy
1
What does Buddhism add to a Stoic?
5
Annatta and taking responsibility
3
Why should I focus on that which is not mine?
2
Why is there no self in the container of the 5 aggregates?
5
Did the Buddha ever define what he meant by "self"?
4
For an "advanced practitioner" (sorry), how to view "addictions" (or bad habits) correctly? How to practice?
2
Does the aggregate of consciousness depend on the aggregates of sensation, perception and mental formations?