Buddhist shaolin monks and their practice

I once saw a television program about Buddhist shaolin monks. They were extremely skilled in martial arts and begin their training as young as 3-4 years old. Their day consists of martial arts training and Buddhist practice.

I was wondering about two things:

Thank you for your time. 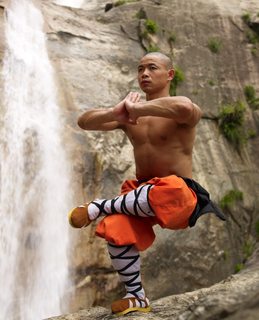 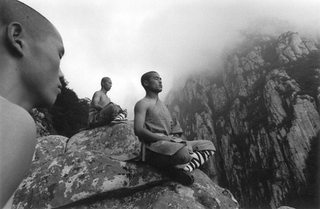 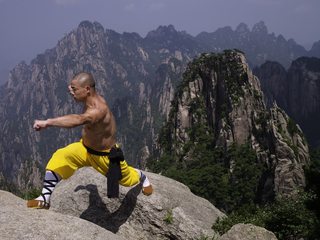 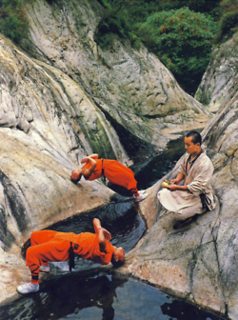 Basically Shaolin martial arts come from the idea of “action meditation” of Chan (dhyana – Sanskrit, Jhana – pali) Buddhism (Mahayana).
The first Shaolin temple was started by an Indian Theravada monk called Buddhabhadra and the next Abbot of the temple was the famous Indian Mahayana monk called Bodhidharma who brought Chan Buddhism to China.

Batuo and the Shaolin Temple

The Shaolin Temple was founded in 495 by the Indian monk Batuo, or Buddhabhadra. After traveling to China, he received permission from Emperor Xiaowen of the Northern Wei dynasty to build a temple at the foot of Shaoshi mountain in the Song mountain range in the Henan province. The word Lin means forest in Chinese, thus the temple was named Shaolin for the forest at the foot of Shaoshi mountain.

Batuo preached the orthodox teachings of Hinayana, or Nikaya Buddhism (Xiao Sheng in Chinese). In this type of Buddhism, which closely follows the teachings of Shakyamuni, there are 250 rules for monks and 500 rules for nuns. Batuo had two disciples named Sengchou and Huiguang, who were both martial artists before becoming monks. They were the first ones to bring martial arts to the temple.

Bodhidharma (PutiDamo or just Damo in Chinese) was another prince of a clan in what is now India. He also chose to leave the royal life to become a monk. When Bodhidharma came to the temple in 527, he brought the teachings of Chan Buddhism, part of the Mahayana (Da Cheng) school. This understanding had been passed down directly from Mahakasyapa to Bodhidharma's master Prajnatara, who was the 27th in the lineage. Bodhidharma was the 28th, and the first patriarch of Chan in China.

Bodhidharma's disciple Huike was, like Sengchou and Huiguang, a military man before becoming a monk, and also brought martial arts knowledge to the temple. Huike became Damo's successor, and after him there were four more before the lineage ended. They were Sengcan, Daoxin, Hongren, and Huineng.

Shaolin monks practice Ch'an Buddhism. They say that the teachings of Ch'an Buddhism are inseperable from Shaolin martial arts, and that to reach the highest level both are required.

Often it is said that Bodhidharma visited the temple and found that the monks were not physically fit to make progress in meditation. This is why he created the chi kung forms Yi Jin Jing (Muscle Tendon Changing Sutra) and the Xi Sui Jing (Bone Marrow Washing Sutra). It is said that his teachings formed the basis for Shaolin martial arts. Martial arts were practiced in China long before this time, and other traditions including Taoism no doubt influenced the development of Shaolin.

In Western culture it is very natural to talk a lot and ask lots of questions. Also in the West, if someone wants to learn about Buddhism they often start to read lots of sutras and books. But Shaolin Buddhism in common with other types of "Zen" Buddhism places an emphasis on experience. It is "A transmission outside of the scriptures, not relying on words, pointing directly to one's mind. The attainment of Buddhahood by seeing into one's nature."

Shaolin Buddhism is an esoteric form of Buddhism which incorporates a thorough knowledge of internal energy (chi). Skill in cultivating this energy can lead to feats that appear superhuman. It is used both for healing and for martial arts. Also internal energy is considered essential for deep states of meditation.

Shaolin monks practice both mindfulness meditation and concentration meditation. There is also the philosophy that everything you do can be a form of meditation. Sometimes students are given a koan (gong'an), or a hua tou. The master is able to tell which methods of meditation are best for the student at their particular stage of practice.

Shaolin Buddhism has now spread worldwide with temples in many countries.

11
Should a Buddhist advocate the learning of a martial art?
1
What is the doctrinal justification for Shaolin martial arts?

5
Do monks have big ups and downs in their life?
4
Monks and politics
4
How do buddhist monks who are teachers have time for their own practice?
4
How is Qi Energy used in Buddhist practice?
1
What's the difference between monks and priests?
1
Buddhist monks give advice for lay life
1
Do Buddhist children from outside of Buddhist countries ever become monks temporarily?
1
Sanghas of those who practice like monks but aren't officially monks?
1
What is the doctrinal justification for Shaolin martial arts?