Difference between Pacceka Buddha and Arahant?

Is the Pacceka Buddha (Skt: Pratyeka Buddha) also an Arahant?

What's the difference between Pacceka Buddha and Arahant?

Why are disciples of the Buddha who achieved Nibbana called Arahants, instead of being a type of Buddha? Although wikipedia calls them Sāvakabuddha (Skt: Śrāvakabuddha) though stating that this was not in the Pali Canon.

Sravakabuddha is a Mahayana terminology so it's not found in the Pali canon.

Sometimes the Buddha refers to himself as an Arahant because they have all attained releases which are the same, abandoning of greed, hate and delusion (it is like saying we are humans instead of men and women). Only the wisdom of the Buddha is different to the rest, as the wisdom of Maha Arahant Sariputta is different from the other Arahants.

In Theravada Buddhism a Buddha is one who discovers Dhammma and starts a Buddha sasana. A Buddha usually mean Samasambuddha, self-enlightened one, not dependent on another's teaching. This definition is different from Mahayana, Vajrayana.

A Pacceka Buddha is also one who has abandoned greed, hate and delusion but he does it by himself, when in an aeon, or time when there is no Buddha's teaching but his wisdom is limited in that he cannot start a Buddha sasana, He is called the silent Buddha.

The following quotes is with basis in Theravada Buddhism.

Here is some videos about Buddhas, Pacceka Buddhas and Arahants by Ven. Yuttadhammo:

Here is a quote found in the book "What Buddhists Believe" by Ven. K. Sri. Dhammananda, chapter: Attainment of Buddhahood, p. 47-49:

"... Therefore, the Buddha’s advice to His followers is that in order to find their salvation it is not necessary for each and every person to wait until Buddhahood is gained. Aspirants can also find their salvation by becoming Pacceka Buddhas (Silent Buddhas) or Arahantas—(Perfected Ones). Pacceka Buddhas appear in this world during the period when there is no supreme Enlightened Buddha. They are also Enlightened. Although their degree of perfection is not similar to that of the Supreme Buddha, they experience the same Nirvanic bliss. Unlike the Supreme Buddha, however, they do not preach to the masses. They lead a life of solitude.

Arahantas can also experience the same Nirvanic bliss as the Buddhas do. There is no discrimination or status in Nirvana. The only difference is that Arahantas do not have the Supreme Enligh- tenment to be able to enlighten others in the same way as the Buddhas can. Arahantas have overcome all their desires and other human weaknesses. They can appreciate the Dharma which was discovered and taught by the Buddha. They also have some ability to show others the Path to salvation ...".

Here is a quote from "Arahants, Bodhisattvas, and Buddhas" by Ven. Bhikkhu Bodhi:

"... There is also a third model of the Buddhist spiritual life, that of the paccekabuddha or pratyekabuddha. The paccekabuddha is similar in many respects to the disciple arahant, except that whereas the disciple arahant attains enlightenment under the guidance of a Buddha, the paccekabuddha gains enlightenment without any outside guidance. Otherwise, the combination of qualities that constitute this type is essentially the same. In the literature of the Buddhist systems, we often read of three types of enlightened ones — Pali: sāvakas, paccekabuddhas, and sammā sambuddhas (= Skt: śrāvakas, pratyekabuddhas, and samyak sambuddhas) — and of the three vehicles that lead to these attainments: the śrāvaka-yāna, the pratyekabuddha-yāna, and the bodhisattva-yāna ...".

Here is a definition of a Pacceka Buddha and here is a website that contains the "Story of Pacceka Buddha Matanga" by U Chit Tin. The story is downloadable only. I have not read it i just found it. It might contain information regarding your question.

There is also the "The Dhammapada", Arahanta Vagga, Chapter 7: The Saints. See picture.

Lastly here is a Buddhism SE-question which looks useful: "Buddhas vs bodhisattvas vs arhats vs devas vs brahmas". In here some users provide good answers to the differences between a Buddha, Pacceka Buddha & Arahant. 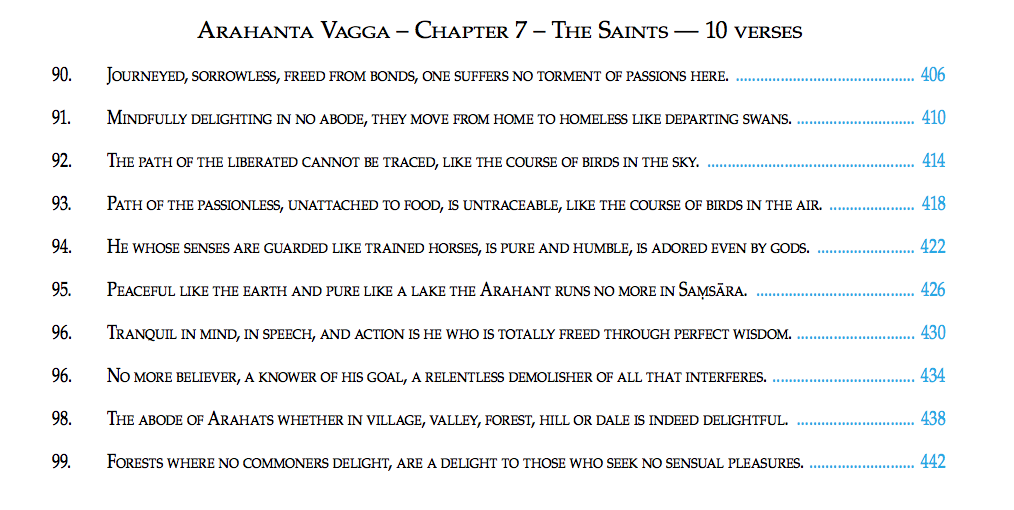 Theravadan view of a savakabuddha.

Not the answer you're looking for? Browse other questions tagged pali-canon buddhas arhats or ask your own question.

14
Can a non-Buddhist get Nirvana?
6
Buddhas vs bodhisattvas vs arhats vs devas vs brahmas
0
Why is Buddha needed?

7
Can a lay person become an Arahant according to the Suttas?
5
Sūkarakhata sutta and the “arahants seeking benefits they already have”
0
What is the difference between Karma and Sanskara
2
What exactly was the difference between Alara Kalama & uddaka rāmaputta teachings?
7
Which suttas in the Pali canon are relatively early or late?
2
Was Anuruddha, one of the ten Great Disciples of the Buddha, born in Sri Lanka?
1
Difference between aggregates and clinging-aggregates?
2
Are impressions or vasanas found in the Pali Canon?