Why is Budai often associated with the future Buddha Maitreya?

Many times I've heard of Budai (pictured below) being associated with Maitreya, the future Buddha. Why is this so and how widespread is this belief? Wikipedia lists a short verse uttered before Budai's death:

Maitreya, the true Maitreya has billions of incarnations. Often he is shown to people at the time; other times they do not recognize him.

Is there more to this association or was the simple utterance of that verse so long ago the sole reason for believing that Budai was the bodhisatta? 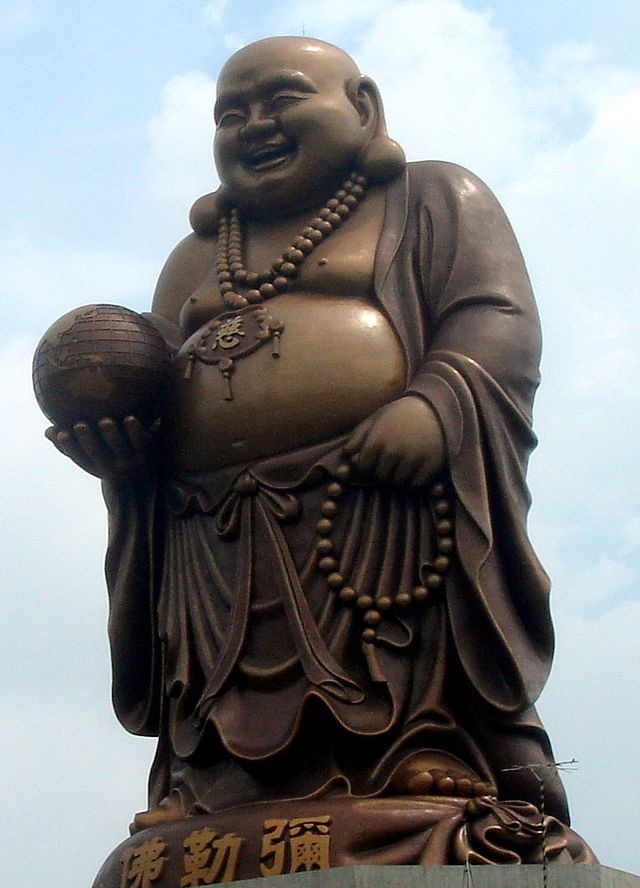 Here is a reference to the Japanese Miroku Bodhisatva.

Another reference says that Hotei was Kaishi Zen priest and a Boddhisattva, the future Maitreya:

Hotei stands out from the other six Lucky Gods because he is the only one known to have been a real person, rather than a mythical being. According to Chiba, his Chinese name was Kaishi. His birth date is unknown, but his date of death was in March of the year 916. He was a Zen priest who could quote Buddhist text verses almost nonstop. Some sources affirm that he was an incarnation of the Bodhisattva Miroku (Maitreya in Sanskrit), the Buddhist Savior of the Future (Giraud 404). However, some of his actions would not be considered particularly saintly. For example, he would beg for meat and fish even though they were foods forbidden to priests.

Bits of details about claims to Maitreya and where references of it could be found in the pali canon.

In Chinese history there was a monk that appeared in the Zhejiang province (I believe it might have been during Tang Dynasty or Song Dynasty). No one knew the name of the monk nor did anyone know where he came from. He always carried a large bag and when people would give him offerings, he would throw it into his bag and continue on his way. It is to teach us to not be discriminate about materials. Since his signature thing was his big bag (bu dai)people referred to him as Budai monk. Before disappearing he gave a riddle (not really a riddle but can't really think of an equivalent. Basically one way a master would judge if a student has understood the teachings would be to have the student provide a phrase or poem that encapsulates all that he has learned). It was agreed upon by all the monk masters during that time period that what Budai monk said completely coincides with Maitreya's life and experiences (Mi le pu sa). That is why China has always used Budai monk as a representation of Maitreya- because it was a reincarnation of the Boddhisattva.

Not the answer you're looking for? Browse other questions tagged buddhas bodhisattva maitreya-buddha or ask your own question.

1
How did Maitreya become so large and rich?

1
Are Aksobhya and Bhaisajyaguru the same buddha?
4
If a Buddha exists then can a private buddha arise or exist somewhere in the same world system without having learned from the current Buddha?
5
What are the Eighteen Buddha Attributes?
4
Is the next Buddha the same entity/being as the previous Buddha, or another discrete being who comes to the same realizations as the previous Buddha?
0
Buddha Sasana of Ariya Maitreya Buddha
1
In the future how many Buddhas will be born?
8
When will Maitreya Buddha come according to the Manimekalai?
3
Was the Buddha a bodhisattva (for the benefit of all) before his awakening?
0
Why wasn't the Buddha a solipsist?
2
Is there mention of Maitreya Buddha in Pali Canon?