What is the easiest way to achieve a state of no physical suffering?

I read that those monks who self-immolated probably felt no pain because they were in nirvana...

Is there a state you can get to more easily than nirvana where you can be conscious and pain-free? If so, how many hours of meditation do you need to get there, on average?

You can reach states after a couple of years of practice where the "suffering" caused by pain is mitigated to a degree. The sensation of pain is still there, however. The only state I've read of where pain might not be felt is in nirodha samapatti. Here, feeling and cessation cease. In fact, the consciousness stream temporarily ceases almost as if you were dead. I don't think you can put a number on how many years (lifetimes!) it would take to reach that state. It's only available to one who has mastered the other eight absorption (rupa and arupa) and then possibly only to those who have reached the stage of arahantship or non-returner. See MN 111 for a description of Sariputta entering this state and the Visuddhimagga at XXIII for a gloss of nirodha samapatti.

On average, how many hours of meditation do you need to get there?

This can be a tricky question to answer. You see practice and development is different from person to person.

That is because people are different. We have different kamma and have done a variety of past deeds in this life and previous lives. This means that its very difficult to give a broad description of lets say how much time people have for practice and thereby how long it will take for them to develop a strong concentration. Some have a lot of time while others have shorter time. Others have a lot of time to practice but also has a lot of mental resistance that keeps them from developing.

Regarding the mental resistance people can have when practicing the dhamma there are the five hindrances. They are what keep beings from developing in meditation and thereby achieving the focused state you are asking about.

In brief the five hindrances are:

These hindrances can become a barrier for the development of meditation. For example if one has a tendency to have ill-will towards beings, objects or situations this ill-will can give further rise to anger, resentment or hatred in the mind which agitaes and distorts the mind so that it cannot see clearly or concentrate without wavering. In order to develop strong concentration we have to do away with wavering of the mind. The antidote for ill-will is loving-kindness. One should then practice Metta meditation. You can learn more about Metta meditation here.

So you see it depends on the being how long it will take to develop e.g. a strong concentration. There are different factors we can mention e.g. practice of the dhamma in this life and past lives, how much time is available for practice, how intense the hindrances are in that being and many other factors.

The best way to develop the concentration you are asking for is to begin practicing yourself and then see for yourself how long it will take. You are actually the only person that can answer it. A Buddha can also answer the question though but then you have to find one to ask.

You cannot attach a time frame but the shortest part for an average being (without prior practice in a particular type of meditation) is through Anapana.

In Nirvana you do not feel the mental pain. In Niroda Samapathi you don't have mental and physical pain.

Nirodha-samāpatti = no conscious, no comprehension, no object, no pain.

Nibbna = No conscious, no body.

How long to meditate for Phala-samāpatti?

In mahāsatipaṭṭhānasutta and nettipakaraṇa said that if the practitioner have gotten appanā-jhāna, then the meditation to enlighten Phala-samāpatti is not going on more than 7 years.

Useful question. (Quảng Đức, the man on fire, was protesting the persecution of Buddhists): 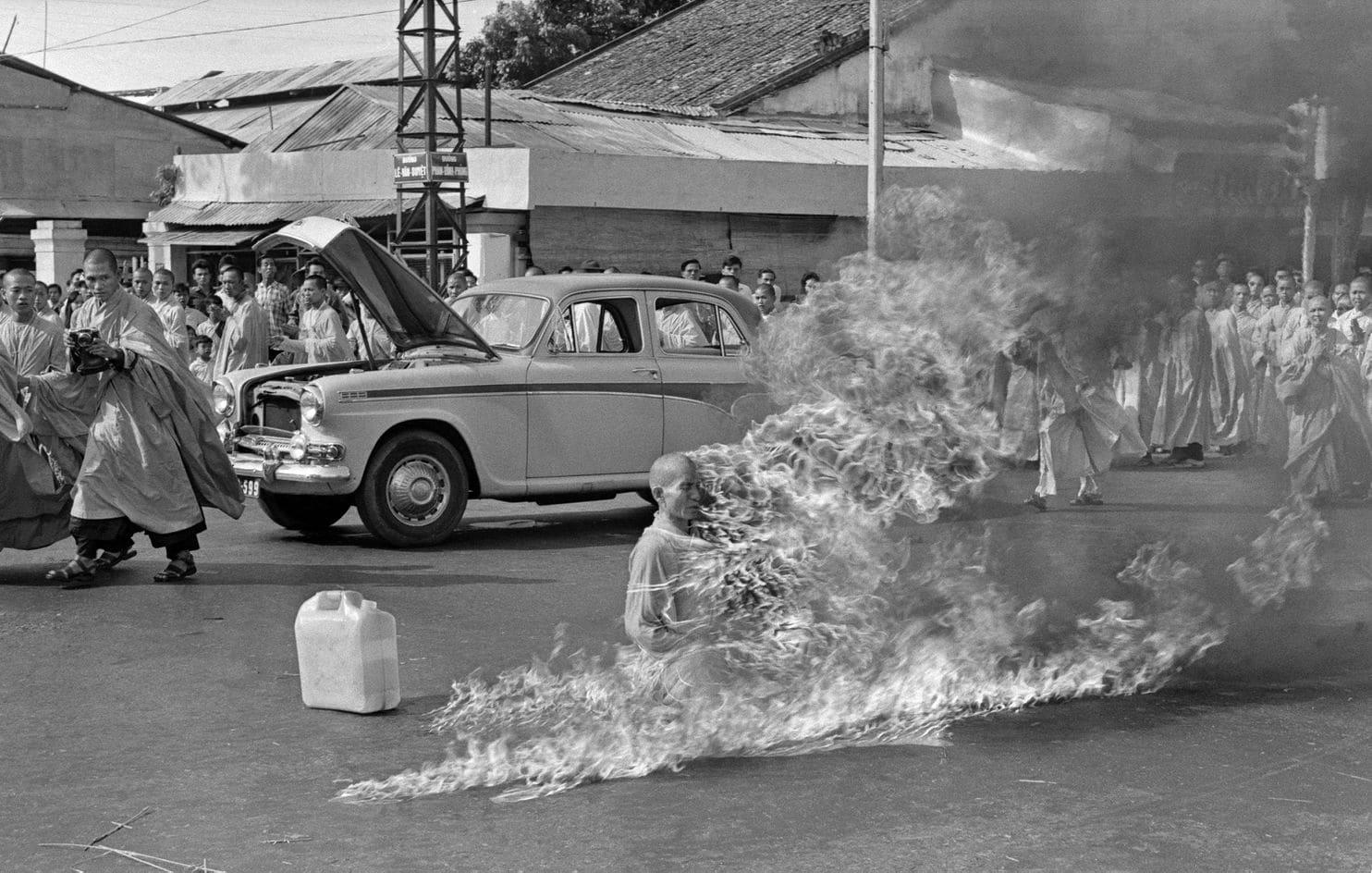 I partially agree with SSSD answer. He says the shortest way is through anapana (respiration) style meditation. In standard ten-day vipassana meditation retreats, the first three days is spent learning/practicing anapana. The intention is on this to hone one's senses to accurately practice vipassana. That's what I came to understand its purpose at least. However, I believe--after experiencing reality beyond gross sensations--the quickest method is via vipassana started with anapana. (Anapana should be used as needed.)

A bonus effect vipassana students seem to experience, is the understanding of how physical pain is transient. In other words, it seems that most make a large step to achieving a state of non-reaction, stoic observation of pain.

For instance, after the course was over, one girl mentioned how she was taking a shower during the course. She decided to experiment. She turned the temperature all the way cold...then all the way hot. She observed the frigid liquid pouring over her without aversion. Then she observed the scalding hot water on her, unscathed. Two others noted they had done the same thing during the ten-day retreat.

My experience for truly understanding, at least temporarily, was on "vipassana day." I followed the rules of the grounds: Didn't observe the others during the course, was timely, etc. On the fourth day, after sitting for hours, I really wanted to move. My legs were in very uncomfortable pain. After ~34 hours of meditation (over the 3.5 days), I just kept observing my breathing as Goenkaji and the teacher instructed. Just before learning the vipassana (body scanning) technique, I had this "storm" of pain well up. Legs began to shake. But it was in those few moments, after learning vipassana, the pain...still present...was observed without reaction. My legs immediately went still.

In about four days (10 hours per day) of anapana and vipassana I did not achieve a complete state of physical suffering. I experienced the state. I sampled a sliver of the pie. I should also mention that I was practicing sitting leading up the course. And before sitting, I went through all the free guided exercises of the Headspace app. I like to be overprepared.

To give you a better sense of how long it might take, before taking the course, I had very poor meditation technique. Ha, it was atrocious. I was mixing methods and taking the easy way out (counting). I was doing that for at least two years, on and off, doing poorly executed self-taught methods. My point is that it's extremely beneficial to follow a formal meditation technique, and finding a teacher will further the value. Otherwise, a state of no physical suffering may not ever happen. (Regardless, the goal itself should not be a state of no physical suffering. It's a darn good reason to start though ;)

So we now know that it may never happen if following poor procedures. Second, one needs to consistently meditate every day. It doesn't necessarily have to be vipassana. One simply needs to sit, and ideally follow a formal technique.

How long until expert level? This does not mean one has achieved a state of no-self and the relinquishment of suffering, but it may give you a better idea of how long it might take. These are based off the 10k-hour rule-of-thumb:

Same deal, but 20 hours per week meditating. I made it 50 instead of 52 weeks to point out that it's not a cake walk: it does require concentrated effort...

Meditating the recommended hour in the morning and hour at night. They're such a good student.

Could also knock off a year for every ten years if taking a ten-day (100 hour) course every year.

Not the answer you're looking for? Browse other questions tagged enlightenment monk nirvana meditation-recommendation or ask your own question.

2
Can we be sensously aware without consciousness?

5
Meditation for higher concentration
5
What meditation practice will allow me to sleep less and focus more?
6
Dealing with angriness or sadness that comes up with “meditation”
4
How to overcome the suffering of attachement to the body's continued existence (in Western modernity)?
3
Where is Nibbana/Nirvana being Unconditioned stated in the Canon?
2
Which is the easiest of the four paths for a novice lay practitioner?
7
Need some pointers about the current phase
2
How to regain Enlightenment?
2
How buddha came back to his human consciousness if consciousness and fabrication ceases after release
1
What happens to consciousness/awareness when entering Paranirvana?