I'm just reading about dependent origination and wonder how different individuals have different feeling even if contact is the same?

It only makes sense if condition for arising of feeling is not only just phassa (contact).

Let's say if I hear a sound and feels unpleasant. Others might not necessarily feel the same. So what would be the other factors in arising of feeling?

"From phassa as a condition, vedanā arises. With the absense of phassa, vedanā does not come to be" (paraphrasing).

A summary of a not-quite chronological cognitive process is described in the suttas as originating in phassa (from external sense base, internal sense base and corresponding viññāṇa) going through sañña and vedanā. A detailed analysis is elaborated in abhidhamma (image from Abhidhammatha Sangaha): 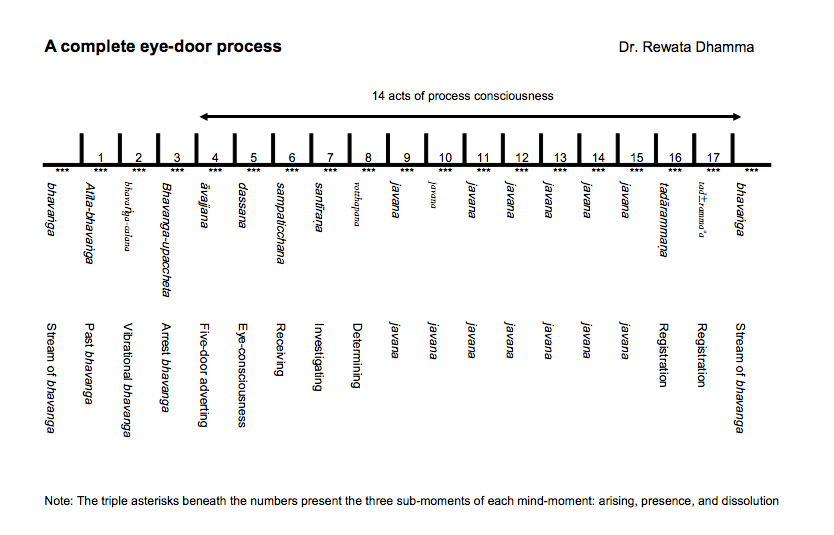 There could be many reasons. We must remember that one cause has as its basis many other causes which again has many other causes as their basis which again has... You get the meaning. The workings of kamma is very difficult to comprehend and the Buddha remained silent on topics like that. You have to be a Buddha to fully comprehend this extremely fine-woven, interpenetrated, interrelated web of causes and effects in order to precisely pinpoint why one person feels a certain feeling while another feels something different. Take a look at the Four Imponderables

I once listened to a video where a man told about a phenomenological thought-experiment based on the cultural bagage of people meaning the different experiences that a person had in life that molded that person into who they are. This is more philosophical than buddhist but i think it can illustrate how this mechanism works.

We have 30 people sitting in a room. All together next to each other. 15 meters in front of them is a gramophone player. Soon it begins to play. It plays Beethoven Symphony No. 9. Sound travels at 343,59 metres pr. second but now we slow down the sound waves to a few metres pr. second. The song is now being played. The sound waves begin to travel towards the people in the room.

At this point the sound waves are mid ways into the room. They have not yet reached the people. At that point the sound waves now represent all the different feelings those people can produce. They can all produce the same feelings since they are human beings and therefore have a specific amount of feelings in their register.

All these people feel different feelings based on the same object - those sound waves. Some also feel the same feelings. Now why do they feel different feelings? According to the cultural bagage they all have different childhood, experiences, likes, dislikes, external influences etc. All these are the reasons for why they experience the object differently. As i said before this is not buddhism BUT if you can see the mechanism beneath you can get the idea of the interwoven set of causes that cause people to experience the same object with the same sense base differently.

In the same way when speaking in buddhist terms we of course operates with causes and conditions not only in this life but in many previous lives as well.

Where do you read about Dependent Origination?

I would recommend this discourse on Dependent Origination by Mahasi Sayadaw. This is well written, comprehensible and filled with jewels of knowledge.

We all experience life in different ways. We have different parents and are raised in different cultures with different values, morals, and social norms. We all learn at different paces with different results. The human body is the equipment by which we interact with the the world of material form. This equipment is inundated with sensory information. Literally thousands of pieces of data every millisecond. Each of us filters this material and chooses what seems to be relevant to us at that particular moment. We don't all choose the same information as particularly relevant to us at the same instant. So though there maybe a hundred thing becoming dependently arisen within our sphere of observation, we maybe only aware of a few or even one or two of them. Another point to keep in mind is that everything we are aware of (dependently arisen), is already in the immediate past. We are always reacting to past observations and our emotional responses are always responses to that immediate past experience and have no reality in and of themselves.

"For the monk whose mind is calmed and who hath cut The cord of lives, his faring on in births Is done with. Freed is he from Mara's bondage." Meghiya IV;10

For each person the sense faculties are different so the sensation in different. Say X has a numb spot and someone touches it then the sensation you get is different for a person who doesn't have such condition.

No sum total of the fabrications in any two people are the same. So their faculties will be diverse and thesensory abilities.

Much of the sensation from contact is when you sense something, then recognised and you mentally react to it by how you perceive the experience. Also each persons perceptions are different thus this aspect of the feeling also differs.

Not the answer you're looking for? Browse other questions tagged pali-canon pratityasamutpada five-skandas or ask your own question.

14
What exactly is the logical relation between the links in the twelvefold chain of Pratītyasamutpāda?
5
Which sutta is it in which Sariputta asks his disciples .. friend if someone asks, is the world eternal
4
How can we use the triple round model to understand dependent origination?
1
Dependent origination and the living arahat
8
Are all forms of Dukkha related to a sense of self?
0
Understanding Saṅkhāra in dependent origination as *choices* of body, speech and mind?
3
Is dependent co-arising an "IF AND ONLY IF A THEN B" relation?
3
What is the meaning of “becoming, birth, old age & death” in the 12 links?
2
What does "becoming" mean in the phrase "the 10 fetters of becoming"?