Do Buddhists believe in Akashic records?

I was reading the wiki page about Akashic records and in 'See also' there is link to Glossary of Buddhism, so it seems like it's connected.

Therefore do you believe in akashic records or something similar where all events and our experiences are stored?

I don't see "Akashic" or "record" in the linked "Glossary of Buddhism" ... so the term "Akashic" might be Theosophist and/or from a tradition other than Buddhist, but I don't know.

Buddhism does believe in "Kamma" which I suppose is a way of saying that "events and experiences are stored".

Early Buddhism, then, clearly held to a permanency of records in the Akasa, and the potential capacity of man to read the same when he has evoluted to the stage of true individual enlightenment.

There is something similar to that described in, for example, the Kevatta (Kevaddha) Sutta (in which the Buddha is someone who "evoluted to the stage of true individual enlightenment"), which says towards the end,

Recollection of Past Lives

That's part of the "miracle of instruction" (i.e. it's a miracle and instructive). Towards the top of that same sutta, the Buddha says,

Kevatta, there are these three miracles that I have declared, having directly known and realized them for myself. Which three? The miracle of psychic power, the miracle of telepathy, and the miracle of instruction.

That is somewhat quoting out of context, though.

It would be better to at least read the whole sutta than only the paragraph I quoted above, and to understand why the Buddha would call it "instructive" i.e. what he is trying to teach.

Yes. In Mind-Only school of Buddhism, there is something called the 8 consciousnesses. The 8th consciousnes, aka the alaya storehouse consciousness, is the closest equivalent to a "Akashic record."

It is an easily misunderstood concept according to the Surangama Sutra and the late Zen Master Huai-Chin Nan's lectures because apparently one can easily become confused about it.

"The storehouse consciousness [alaya] is very deep and subtle; All its seeds are like a torrential flow. I do not explain it to the ignorant, For fear they will cling to it and consider it a self."

It poses as the last barrier to Complete Enlightenment aka Buddhahood and also has to be transformed. There is not much information available in English on this topic because it such a high-level topic and is irrelevant for most people who are at a very low leve of cultivation, according to Master Nan. Also, according to Master Nan, there is no point in going into it much because no one has samadhi in the first place and when you come even close to transforming the skandha of consciousness, you will be receiving lessons from angels and bodhisattvas on the matter anyway... so no need to be learning about all that late-game stuff! Focus on what's immediately before you namely, learning to meditate and attain samadhi and bodhi!

With that as a warning, here is an article written by Zen Master Nan's student, Bill Bodri, that goes at length on the alaya consciousness.

A “Buddha” doesn’t mean Buddhism. It means a completely enlightened being, from any place within the Triple Realm, who has overturned the alaya and escaped the Three Realms, and who can thus survey the Three Realms clearly from without and know all such things within it like:

Note: the above records is AFTER the alaya as well as the stages prior to it are penetrated and purified..

The book by the author of that article, How to Measure and Deepen Your Spiritual Realization, goes into this topic and many other supplementary and complementary topics at length in satisfying extensively scientific detail. Topics covered: 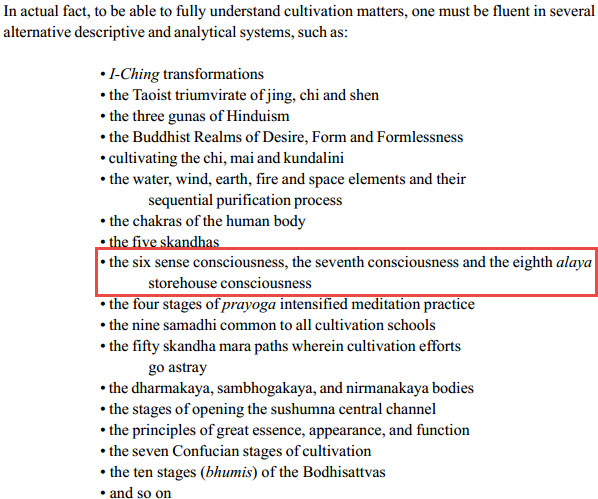 I read it 10 years ago and since then I have become enamoured with the spiritual path. Since then I have read thousands of spiritual and religious content and it is still the highest level book available. I highly recommend it.

The Alaya conscience (8th consciousness) in Buddhism as mentioned above IS CORRECT. AKASHIC in the Original terminology is called "Akasa" and refers to space. The "storehouse" is space and mind and in that view "mind" includes "space."

In the Mahayana Buddhist approach, there is the "9th Consciousness" which refers to Buddhahood directly.

The "Ākāśic Records" are associated with a famous of the literati from the late 1800s named Madame Blavatsky. She founded a religious movement called "theosophy" based on her tutelage under some Mongolian Lamas as well as her own idiosyncratic spiritual ideas and reading. The notion of the "Ākāsic Records" is traced to Helena Blavatsky and is based on some Buddhism and some Hinduism and some of Blavatsky's own interpretation.

2
Are there research based or scientific explanation on the working of Abhiññā / Iddhi?

11
Do Buddhists believe in gods?
9
Did Gautama Buddha believe in God?
5
Do Buddhists have sacred scripture to read?
6
Should Buddhists give their time to helping others?
0
Is ignorance a form of superstition?
3
Buddhism is practiced in many countries by many different peoples. How do Buddhists in America differ in their beliefs, values
0
New Year to Buddhists on 1st January?
0
How do Buddhists that think of karma figuratively do so about rebirth?