Can someone be literally reborn in lower realms due to unskillful thoughts and emotions?

I often wonder myself if the buddhist teachings says that realms are mental states, realities based on external conditions or a combination of the two. Why is that? For example:

If realms are realities as I supposed before, then can someone be reborn in hell or even as an animal because of the feeling of guilty, even irrational guilty, while acting correctly in his life? For example someone who dies in agony or anger because he lives with a demanding and abusive person and becomes regretful about it? Or someone who suffer prejudices about his/her color, culture, religion, sexual orientation or appearance, with threats and phrases like "You'll be reborn in hell because of this or that", if that person holds onto those views, that could be the case? I also remember seeing somewhere, not sure if here, Quora or Reddit, about a case of a monk that did something very little like killing a gnat or a plant and because of his exaggerated fear, was reborn as a cobra.

What about the opposite, that is, a mass murderer like Hitler or Stalin that firmly clings to the view that he's doing the right thing and because of that believes that he deserves a good destination, will his beliefs and thoughts overcome his deeds? Or the case of catholic inquisition with their brutal torture methods and other assertive means, if they believe that they're doing "God's work", or simply a psychopath that doesn't care about what he/she have done.

As everything is "suññatā", what is heaven or hell varies depending on context, culture, eras, individual, but I believe most of us will agree that being born in a place like Afghanistan, for example, would probably feel like hell, when our most basic needs aren't satisfied, living in a constant feeling of fear, angry and misery and it's not just me saying that, as we can see in [1], [2] and [3]. Let alone cases like Nigeria: People With Mental Health Conditions Chained, Abused. And I really want to be wrong when I think about even the remote possibility of being born on those conditions by accident, wrong view or thoughts. It's not like you're destined to suffering or pain living in places like these or destined to happiness living in Finland, but external conditions and environment definitely have an impact on our well-being.

All of that is because the buddhist doctrine is the most down to earth one, with irrefutable teachings like impermanence, non-self, dissatisfaction and emptiness, that can be realized through logic and rational thinking even similar to that used in calculus and thus equip us with a more reliable and verifiable knowledge than the stoic logos, the christian god or the hindu brahma. So Siddarta at his time probably had struggled with the same questions and found his way to deal with them while maintaining peace of mind, he must knows what he's talking about, although I believe that as time passes and cultures changes, only the three marks of existence and four noble truths remains as a useful logic teachings. I don't consider myself a buddhist but even with it's secular approach, the philosophy there is undoubtful useful to our lives.

I know I've been focusing too much on the negative side of life and world there, but if I can find a way out of these thoughts by logical and verifiable arguments, rather than just belief, I think it'll be worth it. I don't expect an absolute answer to this like a guarantee of a method of achieving good rebirths every time but at least some guidelines so that I can return to the common sense that situations like those I mentioned are rare and most of us fall in the intermediary, mediocre life situation, like phenomena in nature generally follows the mathematical normal distribution and that most of us will have the basic means to lead our life to something with the minimal dignity if we can do the very basic.

That being said, I'm sorry for any mistakes or errors while making a question, as English is not my mother language and this is my first time using this site. Thanks in advance.

MN50:12.4: “Come, all of you, abuse, attack, harass, and trouble the ethical mendicants of good character.

And those negative thoughts pursued further led to negative action:

MN50:21.1: Then Māra Dūsī took possession of a certain boy, picked up a rock, and hit Vidhura on the head, cracking it open.

And with that transgression, the gates of hell opened up:

MN50:21.3: Then the Buddha Kakusandha turned his whole body, the way that elephants do, to look back, saying,
MN50:21.4: ‘This Māra Dūsī knows no bounds.’
MN50:21.5: And with that look Māra Dūsī fell from that place and was reborn in the Great Hell.

So negative thoughts pursued relentlessly do open up the gates of Hell--for a very very long time.

So we all have a choice to pursue negative thoughts to hellish outcome. But we also have the choice to simply see such thoughts as negative and let them go, thinking, "this is a negative thought and therefore a useless thought." The key here is to know a thought as negative. Thoughts arise on their own, bubbling up as they do. But they are just thoughts and thoughts should be examined:

And what is the root of suffering, of negative thoughts?

And hell is simply extreme suffering. So the answer is yes.

There's the Right View with effluents or taints, according to MN 117 and it's also related to the theme of reflection in AN 5.57, where one should reflect that he or she is the owner and heir of their karma.

So, to think of yourself as a person, with parents, with this world and the next world, and would be experiencing the results of your karma, and would be the owner and heir of your karma, is actually wholesome and skillful, because it promotes virtuous thinking and living, and it will diminish misconduct. It is also in accordance with the Right View with effluents or taints.

In fact, one should not just think about the afterlife. You should remember that the results of your karma can bite you even the very next moment or the very next day.

And yes, someone can be reborn into lower worlds due to unskillful thinking and thoughts. (Without clicking the links, you read the "basic" answer and if you click the links, you get the "advanced" answer).

What ever thoughts based on wrong view leads downwardly and even if one had lead a generous and virtuoso life, if wrong view at death, evil thoughts based on it, one wouldn't meet much pleasing next. Yet right view, here lead upwardly, even if spend a not so good life, good hpuseholder. And if even right view, of which is a path factor (eg. Noble truth), such would lead toward the track beyond.

Good to mind that and train eager, so stop gaming and youtubing right now. 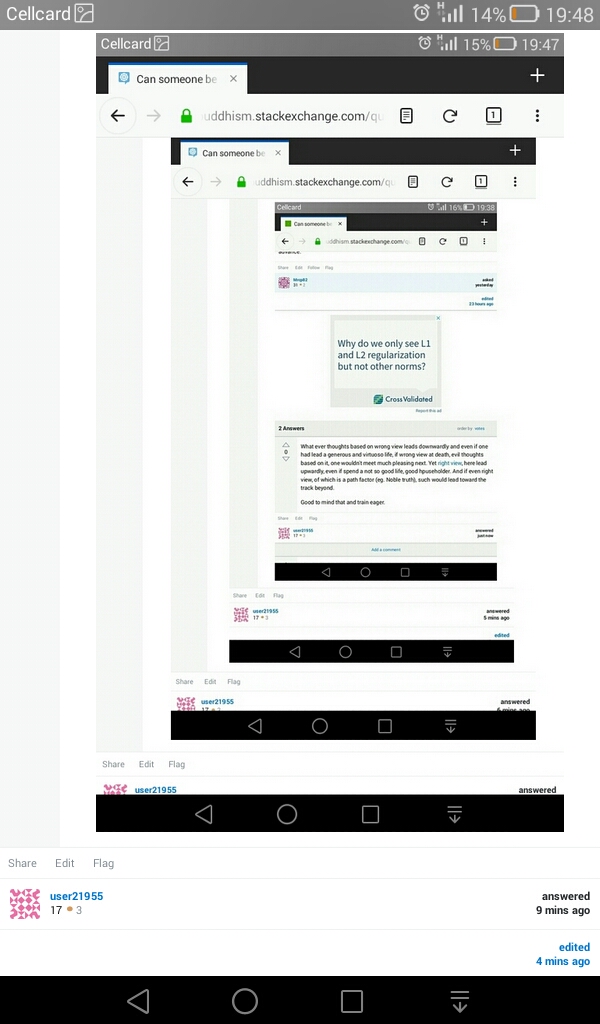 Not the answer you're looking for? Browse other questions tagged theravada karma pali-canon ethics rebirth or ask your own question.

15
What is the precise meaning of anatta?
2
At what point do we arrest reification?
2
(Why) did the Buddha teach rebirth?
3
What is world (loka) in SN 12.44? Why is it called "world"?
1
the result of feelings

2
Does MN 60 contradict SN 12.15? If so, why is it so?
2
How can evil doers be 'reborn' as 'human'?
4
Suttas where Buddha taught laypeople after heaven they will be reborn in hell?
0
Does sexual liberalism lead to rebirth in the hungry ghost realm?
2
Why don't some buddhists believe in karma and rebirth?
2
About mental diseases and kamma
0
Judges passing the death sentence
1
AN 4.197 - do the Pali words "āgacchati" and "paccājāyati" mean "reborn"?
2
The five incurable actions
2
Why did the Buddha not answer Vacchagotta (SN 44.10), but did answer the monks (MN 140)?