the result of feelings

This statement talks about dependent origination - how feelings lead to craving, clinging, becoming (or existence), then the birth of the mental idea of the self (or the birth of individual identity).

Feeling causes grasping, grasping craving, craving becoming, becoming birth and with it aging, sickness, death, and the whole mass of suffering, good householder. So feeling keeps one in the circle of merits and demerits, gain and loos, personal intended actions (kamma) has not end.

As for relation of what feeling determines which course it's lesser about what kind of feeling as to what kind of feeling in regard of what. Pleased with skilful, not harming, not struggling, renouncing (deeds by oneself or others) causes an upwardly path, unpleasant feeling with harmful, sensuallity, as well. While being pleased and delight in unskilful or dspleased with good, agati, way down.

To get ones feelings right adjusted, right view needs to be developed gradually, starting to go after merits, till maybe the point where feelings at all are seen just as feeling, and by gain of knowledge, even abound (being) touch(ed) at all, as touch (at ignorance) is the cause of feeling to arise.

It's possible good to mention that a commons person "neutral feeling" isn't the same as 'out of touch' but merely sign of grave not-knowing, ignorance.

more on it maybe here: Viel der Gefühle - Many of those Feelings 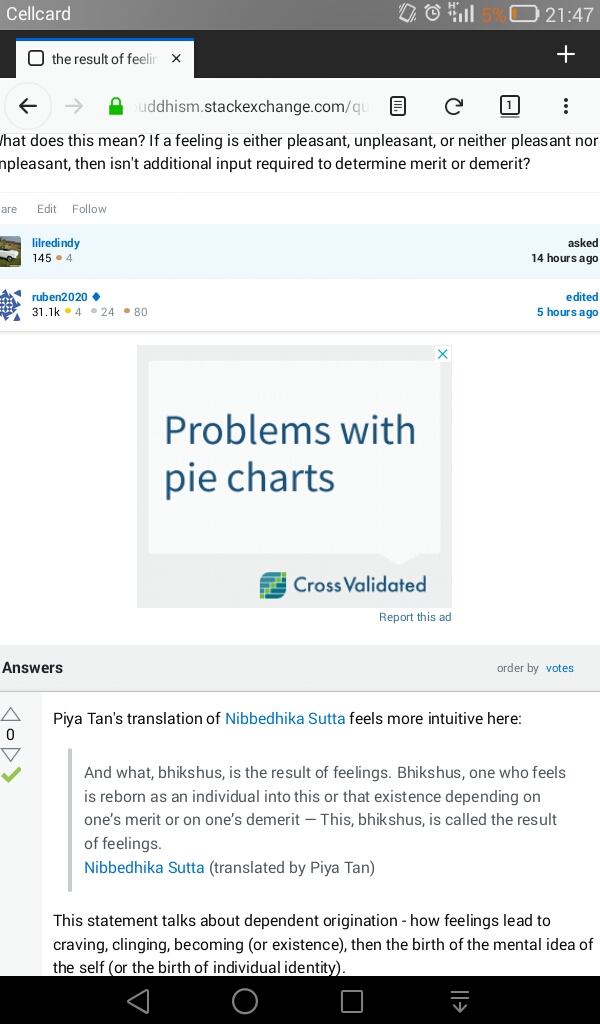 Not the answer you're looking for? Browse other questions tagged pali-canon aggregates or ask your own question.

4
Can someone be literally reborn in lower realms due to unskillful thoughts and emotions?

5
What Buddhist materials explain how to understand one's irrational feelings?
2
Where in the Tripitaka completion of the formation of Karmic result is mentioned?
0
Are feelings (vedana) always caused by ignorance?
0
Is consciousness a result of contact?
0
Are the clinging aggregates the cause of clinging after death?
2
What are the aggregates made up of?
4
How can Name-and-form be the cause and condition for the manifestation of the consciousness aggregate?
2
MN 38: How do aging-&-death cease when the eye sees a form?
2
What are the five kinds of seeds?
2
Does the aggregate of consciousness depend on the aggregates of sensation, perception and mental formations?