Were monastic training texts written down during the Buddha's life?

It seems a commonly held notion that the actual written text of Buddhadharma were only recorded well after the life of the Buddha. However, this sutta seems to indicate that was not so:

Isn't this prima facie evidence that contrary to this belief that actual teachings were written down and consulted during the life of the Buddha?

I suspect that "text" there is an artefact of the translation-into-English -- it says "texts" and you think "written".

A simpler and more common translation is just, "found in the suttas and the vinaya".

You can use the "views" icon on the page menu to enable side-by-side display of the Pali.

I'm not sure any of the Pali words say "written text".

I haven't found a clear translation of sandassetabbāni, here's a footnote from Buddhism: Buddhist origins and the early history of Buddhism in South and Southeast Asia edited by Paul Williams (in a chapter titled, "On the very idea of the Pali canon"): 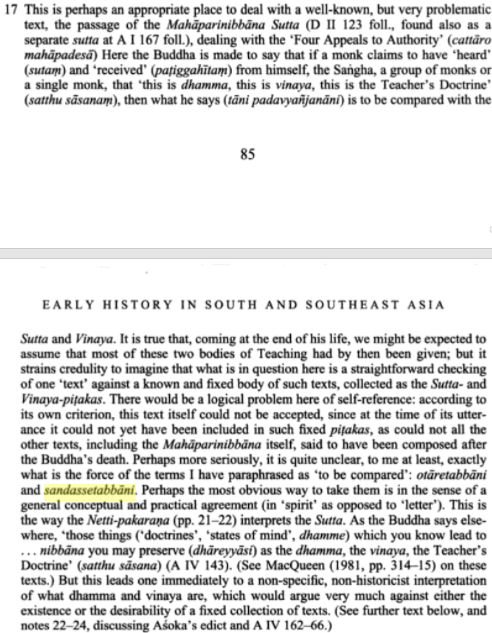 ... which at least implies it's understood to mean something like, "compared with", not, "written text".

This is an inaccuracy in the translation of Ven. Sujato.

Let's compare it against the translation of Ven. Anandajoti on this page:

Here the latter translates "Vinaya" as "Discipline". The former translates it as "texts on monastic training".

Not the answer you're looking for? Browse other questions tagged pali-canon sutras texts vinaya buddhadharma or ask your own question.

1
Pali Linguistic Algorithm?
6
Does the Buddhist text Alankarabuddhi still exist?
3
What are timeframe were pali canons, included commentaries, done, especially Mahavihara-Theravada?
1
Western scholars: Did the Buddha not speak the Digha Nikaya?
3
The Four Great References (AN 4.180)
2
What are the most prominent Tibetan Buddhist texts that are only written in Tibetan script?
2
How is the Tibetan Kangyur actually laid out?
1
Publication of written texts involving the dhamma
3
Was Sariputta alive during the time of Buddha's death?