What should be a Buddhist's response to derogatory depictions of Buddhism?

I have come across multiple instances where famous people or mainstream media have treated Buddhism and its culture in a derogatory manner, though I like to think most of the time it was because they are ignorant and not deliberate. This is not limited to famous ones of course. I will note 2 popular examples here.

The first one: SNL or Saturday Night Live (an American weekly television show) did an episode titled Rude Buddha, which was about the rude mentality of Lord Buddha. It consisted of a famous celebrity acting as Lord Buddha and being condescending and rude towards his followers, including sexual innuendos. Now, it's obviously a humorous dig at Lord Buddha's life. And I am not going to deny, I found it quite hilarious.

There's another example where the famous Portuguese footballer Cristiano Ronaldo uploaded a photo to his Instagram where he seems to have one foot resting on the base of a statue of Buddha's head. Fans were outraged and the photo was met with severe criticism. However, despite the incident being as old as from 2016, the photo still can be seen in his Instagram. It seems like the sentiment of Buddhists is not taken seriously enough for this photo to be removed. While I found the SNL episode funny, I do not view this in the same sense. He could have obviously taken it down considering how insensitive it is to Buddhists as a whole.

I believe no religion should be excluded from criticism. It enables people to engage in intellectual discourse on religions. However some incidents lean more towards mockery. Most of the comments in the SNL video (it's available on YouTube and I have provided the link above) are about how most Buddhists would find this funny and move on. However, I always wonder, to what extent should we tolerate these?

My moral dilemma is, how far can we be okay with our religion being mocked or treated insignificantly?
Do we always have to give the benefit of ignorance when someone disrespects Buddhism and its culture?
And how should a good Buddhist react to incidents like these?

If you think you can & feel moved to help others as if they are sick with ignorance then give the medicine but don't get angry or annoyed with symptoms of the disease and don't punish a person for being sick, nobody wants to be ignorant in the grand scheme of things.

Story told by Ven. Ajahn Brahm, from this page, on how to respond to abuse, such as the destruction of Buddhist scriptures and statues:

There were riots in the streets some years ago after a guard at Guantanamo Bay was accused of taking a holy book and flushing it down the toilet.

The next day, I took a call from a local journalist who told me he was writing an article about the outrage by asking leaders of all the major religions in Australia the same question he was about to ask me.

“What would you do, Ajahn Brahm, if someone took a Buddhist holy book and flushed it down your toilet?”

Without hesitation I answered, “Sir, if someone took a Buddhist holy book and flushed it down my toilet, the first thing I would do is call a plumber!”

When the journalist finished laughing, he confided that that was the first sensible answer he had received.

Then I went further.

The book is not the religion. Nor is the statue, the building, or the priest. These are only the “containers.”

The Buddha himself was never disturbed by abusive speech hurled at him and taught that if abuse is not accepted and reacted to, then it stays with the abuser. The Buddha taught us to respond calmly and not be provoked into anger.

I have heard that on one occasion the Blessed One was staying near Rajagaha in the Bamboo Grove, the Squirrels' Sanctuary. Then the brahman Akkosaka Bharadvaja heard that a brahman of the Bharadvaja clan had gone forth from the home life into homelessness in the presence of the Blessed One. Angered & displeased, he went to the Blessed One and, on arrival, insulted & cursed him with rude, harsh words.

When this was said, the Blessed One said to him: "What do you think, brahman: Do friends & colleagues, relatives & kinsmen come to you as guests?"

"And what do you think: Do you serve them with staple & non-staple foods & delicacies?"

"Yes, sometimes I serve them with staple & non-staple foods & delicacies."

"And if they don't accept them, to whom do those foods belong?"

"If they don't accept them, Master Gotama, those foods are all mine."

"The king together with his court know this of Master Gotama — 'Gotama the contemplative is an arahant' — and yet still Master Gotama gets angry."

Whence is there anger for one free from anger, tamed, living in tune — one released through right knowing, calmed & Such.

You live for the good of both — your own, the other's — when, knowing the other's provoked, you mindfully grow calm.

When you work the cure of both — your own, the other's — those who think you a fool know nothing of Dhamma.

When this was said, the brahman Akkosaka Bharadvaja said to the Blessed One, "Magnificent, Master Gotama! Magnificent! Just as if he were to place upright what was overturned, to reveal what was hidden, to show the way to one who was lost, or to carry a lamp into the dark so that those with eyes could see forms, in the same way has Master Gotama — through many lines of reasoning — made the Dhamma clear.
SN 7.2

Let's not forget that within Buddhism there is a healthy dose of self-deprecating humor and the occasional irreverence for depictions of the Buddha: 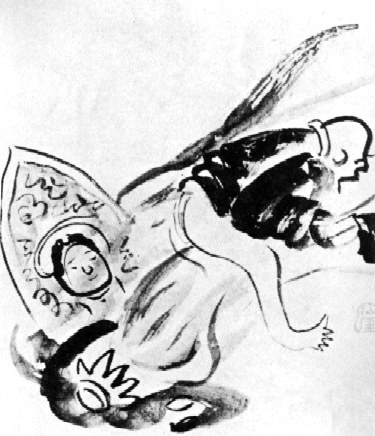 Danxia Tianran (739-824), a famous disciple of 8th-century Chan masters Mazu and Shitou, was spending a night at a ruined temple with a few traveling companions. It was fiercely cold and no firewood was to be found. Danxia went to the Buddha-shrine hall, took down the sacred wooden image of the Buddha, and set it ablaze to warm himself. Reproached by his friends for this act of sacrilege, he said: “I was only looking for the sharira (sacred relic) of the Buddha.” “How can you expect to find sharira in a piece of wood?” asked his fellow travelers. Replied Danxia, “Ah, well then, I am only burning a piece of wood after all. Shall we burn a few more?”

Not the answer you're looking for? Browse other questions tagged the-buddha statue or ask your own question.

4
What are Buddha-fields and Dharma-fields in Buddhism? What roles do they play in various lineages?
7
What is the significance of the 28 Buddhas within Buddhism?
4
What does Buddhism say about having dreams about the Buddha?
2
What were the last word of Lord Buddha according to different schools of Buddhism?
5
What does "Namaste" mean in Buddhism context and why is it even associated with Buddhism?
1
What is opinion of Nichiren Buddhism on the concept of a Creator or Supreme Being?
1
What Nichiren Buddhism says about rebirth and reincarnation?
2
What is the opinion of Buddhism on the caste system and untouchability of Hinduism?
2
What is the ultimate goal of Buddhism? Is it nirvana?