What is meant by “divorcing the view and the action” and why is it considered so dangerous?

Rinpoche accuses modern scientists with the phrase "divorcing the view and the action" and advises that this is a saying among masters to describe something considered very dangerous: 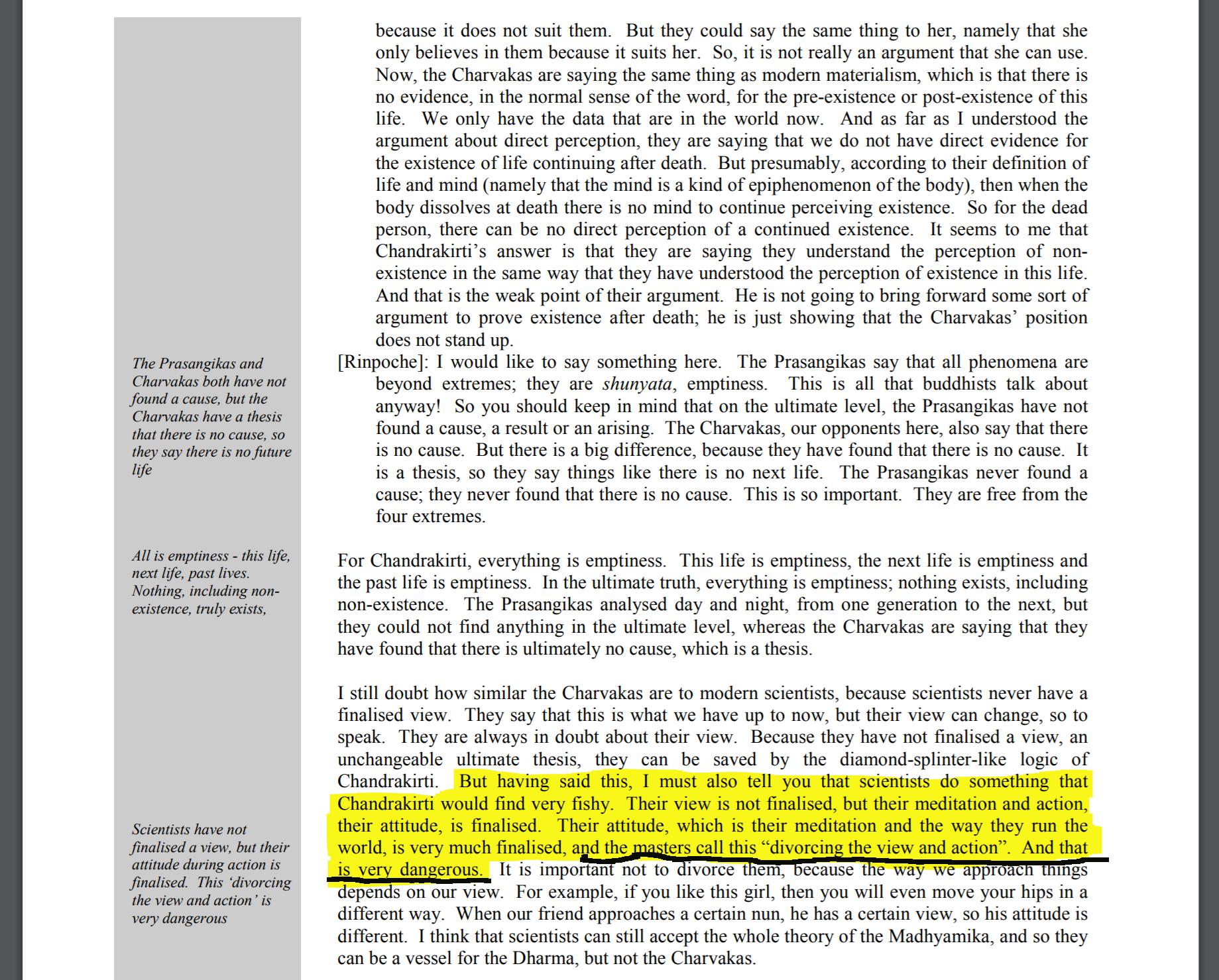 I'm also wondering if it is appropriate to describe modern Secular Buddhists who also deny the conventional existence of past or future lives as holding the same view as modern scientists and subject to this same phrase? If so, why is this so dangerous and what is meant by "divorcing the view and the action?"

What is the translation of this phrase in Pali, Sanskrit, or Tibetan to the extent that there are examples of masters using this phrase in a similar way in any of these languages?

Negative experiments along these lines are legion, though they rarely find their way to the front page of your local newspaper, since nobody has any reason to promote them. One can find mention of them in places like Skeptical Inquirer magazine, or outlined at websites like the Skeptic’s Dictionary or Quackwatch.

It is for reasons such as these that any contemporary, scientifically informed Buddhist practice should reject belief in rebirth and its associated kammic causation.

Quoted above is from the link you attached with regards to Secular Buddhists. In short, the set of arguments is... because we can't experimentally recover memories that are not encoded in neural tissue, etc.. it follows that rebirth is false. That right there is a pure materialist view, similar to the Charvakas idea which the Rinpoche said has no place in Dharma.

Following the same analogy, the Secular Buddhist will not find a different neural tissue memory imprint representing intention between the monk approaching a certain nun and the lover.

So the danger in the materialistic view is that the modifiability of Kamma (intention) is denied and without that, there is no liberation from the samsaric cycle of suffering.

Quoted below is from Kamma and its Fruit by Nyanaponika TheraNyanaponika.

However, a scientist's view is not finalized, a scientist doesn't start with a premise that everything is material or that the equipment he/she has can recover everything knowable thus will not reject the unproved rebirth idea or any unproven idea for that matter. That is why I think Rinpoche says a scientist could be a vessel for the Dharma.

Most writings on the doctrine of kamma emphasize the strict lawfulness governing kammic action, ensuring a close correspondence between our deeds and their fruits. While this emphasis is perfectly in place, there is another side to the working of kamma — a side rarely noted, but highly important. This is the modifiability of kamma, the fact that the lawfulness which governs kamma does not operate with mechanical rigidity but allows for a considerably wide range of modifications in the ripening of the fruit.

If kammic action were always to bear fruits of invariably the same magnitude, and if modification or annulment of kamma-result were excluded, liberation from the samsaric cycle of suffering would be impossible; for an inexhaustible past would ever throw up new obstructive results of unwholesome kamma. Hence the Buddha said:

"If one says that in whatever way a person performs a kammic action, in that very same way he will experience the result — in that case there will be no (possibility for a) religious life and no opportunity would appear for the complete ending of suffering.

"But if one says that a person who performs a kammic action (with a result) that is variably experienceable, will reap its results accordingly — in that case there will be (a possibility for) a religious life and an opportunity for making a complete end of suffering."

Not the answer you're looking for? Browse other questions tagged rebirth science secular-buddhism or ask your own question.

13
What is the difference between rebirth and reincarnation?
7
What is Buddhism's view on past lives?
5
Does DN2 and MN36 provide an irrefutable statement on the fact of rebirth?
4
What would be the secular interpretation for the Assu Sutta and the Mata Sutta?
1
What is right view regarding rebirth?
1
Buddha's past lives in the Pali Suttas outside of Jataka
1
If the self is scientifically measured, what is the Buddhist view on this?
0
What arguments are there for “karma” — that the agent inevitably experiences the result of their actions?
3
How did ancient Indian Buddhists describe causation vs correlation? Why were they concerned with this?
-2
Why is speaking about the conventional self in this life ok, but speaking about the conventional self in past and future lives forbidden?