What is the meaning of "a ray of light which illuminates thousands of buddha fields in the east" in the Mahayana Lotus Sutra?

The Lotus Sutra implies light came from Gautama Buddha, which connected to " illuminating thousands of buddha fields"; can anyone enlighten me as to what that could mean?

When the Buddha of the Mahayana illuminates the sāhasracūḍikalokadhātu (thousandfold world-system), it is not the first time that he does this. He did this before when he preached the first of the sūtras that comprise the Mahāprajñāpāramitā vaipulya, also before when he preached the Buddhāvataṃsakasūtra. I hope this is not too long, moderation can inform me if it is, but this is from the publicly-available Mahāprajñāpāramitopadeśa translated by Venerable Migme Chödrön. In it, the commentary discusses why the Buddha is said to have emitted light when he taught the Prajñāpāramitā. He similarly lit the world in the depiction in the Lotus Sūtra:

Question. – The nature of fire (tejas) is flame which rises upward (ūrdhvajvāla), that of water (āpas) is moisture which tends to go downward (adhaḥsnigdhatā), that of wind (vāyu) is sinuous movement (tiryaggamana). Therefore the vapor ignited by the rays [of the Buddha] will necessarily go upwards. Why does the sūtra say that that it illuminates everywhere (parisphoṭati) the trisāhasramahāsāsralokadhātu and the universes of the ten directions?

Answer. – The rays are twofold: vapor of fire and vapor of water; such are the vapor of fire of the sun-stone (sūryakānta) and the vapor of water of the moon-stone (candrakānta).1 Although the nature of fire (tejolakṣaṇa) is to blaze upward, the fire in the human body rises, descends and penetrates everywhere. It is the same for the solar fire and it is in this way that the waters of the earth dry up in the summer months. Thus we know that fire does not always rise upward.

Furthermore, by the power of the Buddha, these rays penetrate the ten directions like an arrow (iṣu) shot by a bow (dhaṇus) goes straight to the target.

Question. – Why do these rays first light up the east and only after that the south, the west and the north?

Answer. – Since the sun rises in the east, the east is first; the Buddha, who is in harmony with people’s ideas (sattvacittānuvartanāt), lights up the east first. Furthermore, we will always come up with the same difficulty: if he first illuminated the south, we would wonder why he did not first illuminate the east, the west and the north; if he illuminated first the west or the north, the difficulty would be the same.

Question. – When do the rays disappear?

Śāstra: First the Buddha smiled with his entire body (sarvakāyāti) then he emitted rays from the pores of his skin (romakūpebhyaḥ); why now does he exhibit his usual light (prakṛtiprabhā) to light up the ten directions?

Question. – What is the usual light (prakṛtiprabhā) of the Buddha?

Answer. – It is a light one armspan in width (vyāmaprabhā) surrounding the body of the Buddha on all sides; the Bodhisattva possessed it since his birth and it is one of the thirty-two marks (lakṣaṇa) called vyāmaprabhālakṣaṇa. (see Appendix 3)

Question. – Why is the usual light of the Buddha one armspan in width (vyāma) and not larger?

Answer. – The usual light of the Buddha is immense (apramāṇa) and lights up the universes of the ten directions. The miraculous bodily light of the Buddha Śākyamuni is immense; it is the width of one armspan, a hundred armspans, a thousand prabhedakoṭi of armspans and fills up the trisāhasramahāsāhasralokadhātu and the ten directions. However, the Buddhas’ custom is to manifest in the world of the five corruptions (pañcakaṣāyaloka), where beings are of middling qualities (guṇa) and knowledge (jñāna), a brilliance of only one armspan (vyāmaprabhā). If he showed a larger brilliance, the people today, of little merit (alpapuṇya) and weak faculties (mṛdvindriya), would be unable to tolerate the light. When a person sees a god, his eyes are blinded because the greater the [outer] light, the more the eye contracts. It is to people of keen faculties (tīkṣnendriya) and eminent merit (gurupuṇya) that the Buddha shows his immense brilliance (apamāṇaprabhā).

Besides, there are people who, seeing the usual light of the Buddha, rejoice (pramodante) and find salvation.

In the commentary, the light is described as related to the halo/aura of the Buddha. The halo of the Buddha appears in even the "Early Buddhist Texts." It appears in Saṃyuktāgama Sūtra No. 197 and in Venerable Buddhaghosa's commentary on the Dhammasaṅgaṇī, a Pāli Abhidharma text, and in Pi Tv Kd 1 in the Pāli vinaya. 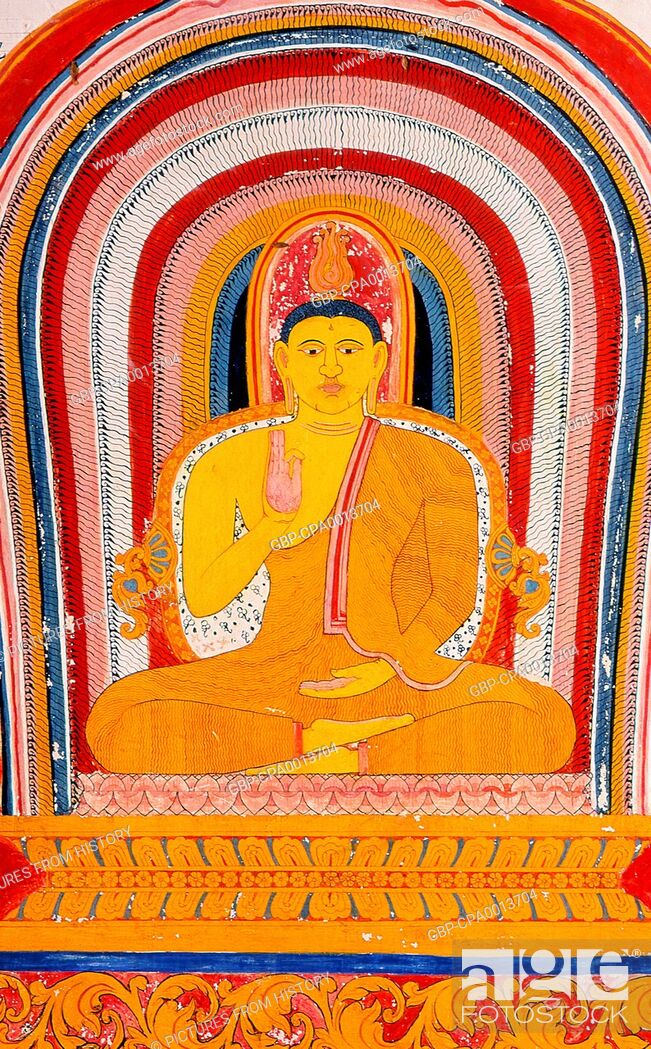 In the Lotus Sūtra, the halo of the Buddha, the rays of light, illuminate the pure lands of the Buddhas. This is related to the idea in the Lotus Sūtra that world-systems are also kinds of pure lands ruled by their Buddha. In the Brahmājālabodhisattvaśīlasūtra, Vairocana Buddha dwells in the pure land of the Lotus Vault surrounded by world-systems, each replete with an emanated Śākyamuni Buddha with his pure land. In Chapter 16 of the Lotus Sūtra, Śākyamuni Buddha enigmatically declares "this land" as his pure land, and declares that it is always tranquil, even when living beings witness it destroyed by fire at the end of the world.

The Buddha first poses 56 stanzas to Manjushri in the beginning of the Lotus Sutra, some of the last stanzas mention fields:

(49). O how powerful is the Leader of men! how extensive and bright is his knowledge! that a single beam darted by him over the world renders visible so many thousands of fields!

(53). That one ray extending from him all over the world makes visible many thousands of fields. It must be for some purpose that this great ray has been emitted.

(55). There must be a weighty reason why so many thousands of fields have been rendered visible, variegated, splendid, and shining with gems, while Buddhas of infinite sight are appearing.

So 佛土 (Literally: Buddha-soil or Buddha-earth) is rendered literally English as "field" (the same characters are used in stanzas 49 and 53).

However, in Buddhist literature, these are the characters used for buddhakṣetra which is equivalent with Pure Land in East-Asian Buddhism. In the Mahayana sutras, there are many buddhakṣetras.Bodhisattvas such as Avalokiteśvara and Manjushri would obtain pure lands after they attained buddhahood.

In the Lotus Sutra, Buddha's close followers such as Śāriputra, Mahākāśyapa, Subhuti, Maudgalyāyana and Buddha's son Rāhula would also have pure lands.

The literal meaning of "field" is not lost in the Lotus Sutra though. Manjushri answers a bit below the stanzas:

The aforesaid Lord Kandrasûryapradîpa, the Tathâgata, &c., when a young prince and not yet having left home (to embrace the ascetic life), had eight sons, viz. the young princes Sumati, Anantamati, Ratnamati, Viseshamati, Vimatisamudghâtin, Ghoshamati, and Dharmamati. These eight young princes, Agita, sons to the Lord Kandrasûryapradîpa, the Tathâgata, had an immense fortune. Each of them was in possession of four great continents, where they exercised the kingly sway. When they saw that the Lord had left his home to become an ascetic, and heard that he had attained supreme, perfect enlightenment, they forsook all of them the pleasures of royalty and followed the example of the Lord by resigning the world; all of them strove to reach superior enlightenment and became preachers of the law. While constantly leading a holy life, those young princes planted roots of goodness under many thousands of Buddhas.

So reading this as either:

Not the answer you're looking for? Browse other questions tagged meditation-effects gautama-buddha lotus-sutra or ask your own question.

2
Panpsychism and philosophical interpretations of buddhism
5
Shariputra and a bodhisattva losing bodhicitta
4
Is Buddha immortal? (in Mahayana)
2
The Nine Devices
2
What is the, "Counterfeit Law" as referenced in Lotus Sutra
0
What is SGI? And the Lotus sutra?
2
Is upaya a lie?
1
What does this quote from the Lotus Sutra mean?