can any one please explain me the significance of Talipot fan in Buddhism?

can any one please explain me the significance of Talipot fan in Buddhism ? is it part of any traditional process ? I have seen many photos in internet as Bhikkus holding the Talipot HandFan, some covers their face while chanting. Is there any particular significance ? 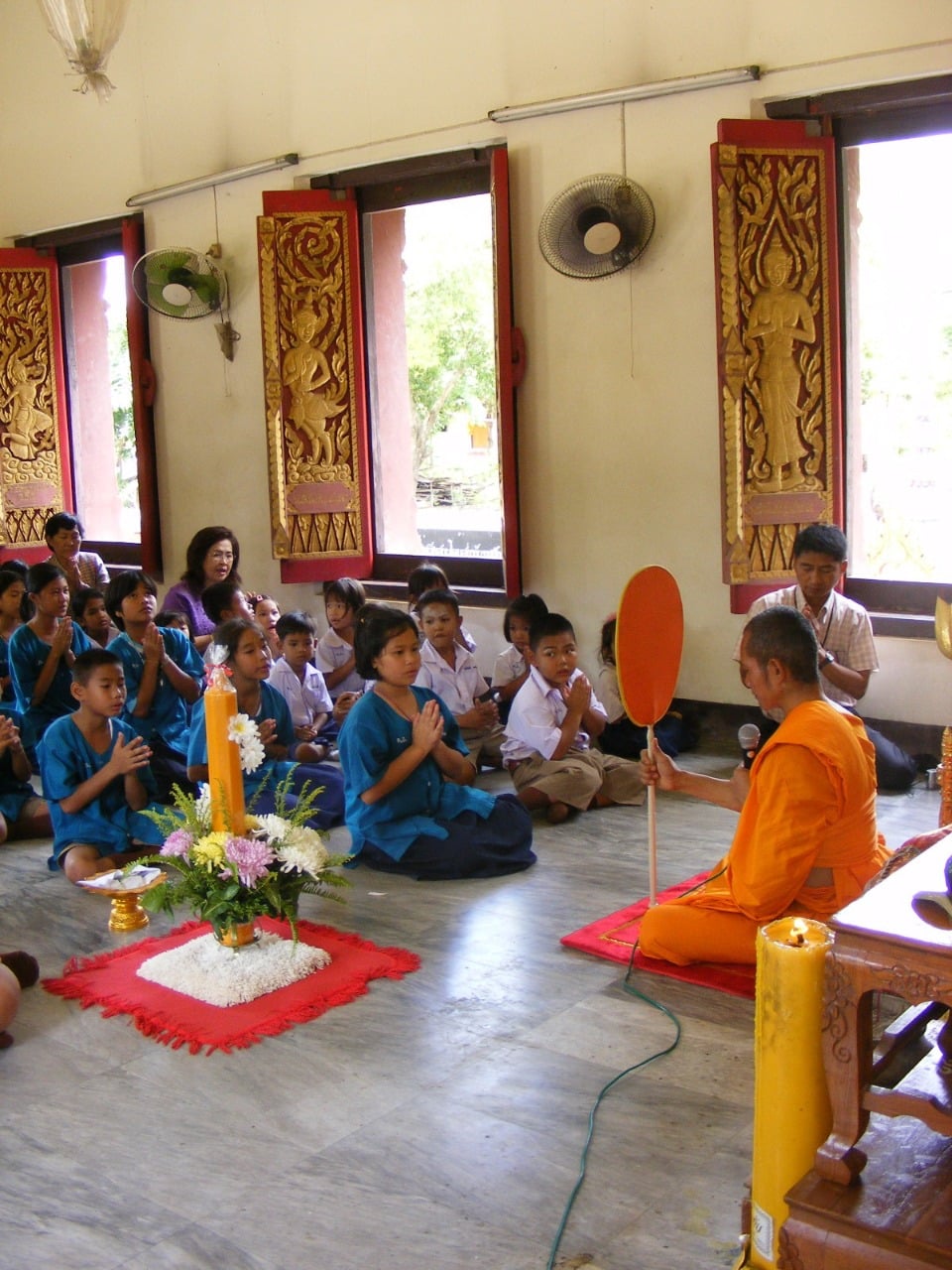 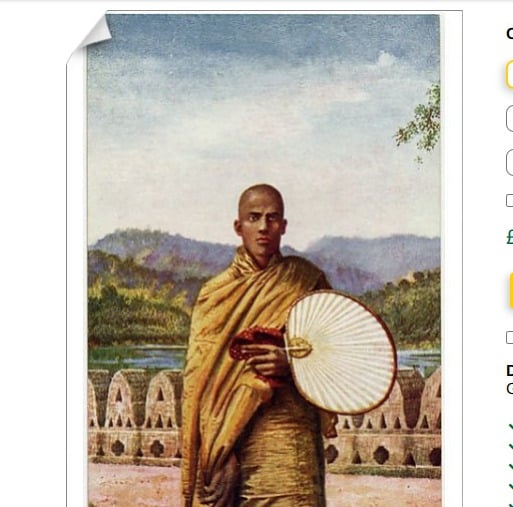 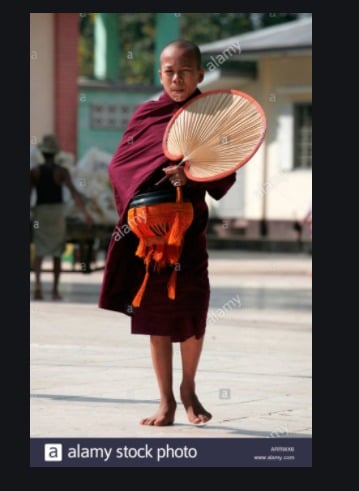 In the book "Buddhist Ceremonies and Rituals of Sri Lanka" by A.G.S. Kariyawasam, there is a sub-chapter on the Pirit Ceremony which states:

Pirit (or paritta) is a collective term designating a set of protective chants or runes sanctioned by the Buddha for the use of both lay-men and bhikkhus. Pirit-chanting is a very popular ceremony among the Buddhists of Sri Lanka. As the term itself implies it means a safety rune (paritta = protection), the ceremonial recital of which is regarded as capable of warding off all forms of evil and danger (vipatti), including disease, the evil influence of the planets, evil spirits, etc. These may be real dangers to the safety of persons and property as well as superstitiously believed-in calamities. In addition to this curative and positive aspect, pirit is also chanted for the attainment of general success (sampatti,siddhi). In the domestic and social life of the Sri Lankan Buddhist no important function can be considered complete without this ceremony. However, the ceremony may vary from the simple to the highly elaborate, depending on the occasion and the status of the sponsor.

Until the monks arrive for the pirit chanting, the devadutaya is kept confined and guarded. Once the monks arrive and take their seats inside the pavilion, a dialogue takes place between the devadutaya and a monk, the purpose of which is to reveal to the assembled gathering that the task of the messenger, which was to invite the gods to partake of the merits, has been done and that all the gods have arrived. The devadutaya makes this statement standing and guarded by the swordsmen, at the entrance (dorakada) to the chanting pavilion within which the monks have taken their seats. It is this statement of the devadutaya which thus comes to be called the dorakada-asna, meaning “the message read at the thresh-old.” The gist of this statement, written in the same kind of stilted language as the vihara-asna referred to earlier, is that all the gods invited have arrived for the pirit ceremony so that they may dispel all misfortune and bring about prosperity to all.

After the dorakada-asna, another monk, standing within the pavilion, reads out a similar text called the anusasana-asna, wherein all the gods assembled are requested to rejoice in the merits of the entire ceremony. This monk holds in his hand a round-handled fan made of the talipot leaf, elaborately decorated, a symbol of authority and high ecclesiastical position. These three ritualistic texts mentioned in the foregoing account (i.e., vihara-asna, dorakada-asna, and the anusasana-asna) were all composed during the Kandyan period (18th century) when ceremonies and rituals, especially those connected with the gods, became more popular than during the earlier periods.

So apparently, the use of the talipot fan (as a ceremonial fan) originated in Sri Lanka in the Kandyan period (18th century) and its use is as a symbol of authority and to show the high ecclesiastical position of certain monks. From there, it's not surprising that it spread to other Theravada countries.

Further note: I think the talipot fan originally was used just as a fan to produce breeze or to shade from sunlight, but at some point, it was given a ceremonial function and became elaborately decorated.

If I understand correctly, a monk covers his face with a fan to remove his identity, to become an anonymous monk rather than a specific person.

One of the most important doctrines in Buddhism is anatta, a realization that our notion of "self" or "I" is an illusion and that in fact there's no such thing.

Removing one's identity by covering the face while speaking with laypeople serves to illustrate the teaching of anatta in a simple and obvious manner.

It is as if the words of wisdom were coming from the overall corpus of Dharma ('dharma-kaya') rather than a specific individual.

Can any one please explain me the significance of Talipot fan in Buddhism?

The Talipot fan is used when giving a Dhamma talk to remove focus from the monk so that the listeners will instead focus on the spoken words, ie. the Dhamma.

The focus should not be on the monk and his appeareance. Some monks are very good looking due to the purity of their mind and listeners might become attracted to their appearance thereby removing focus from the real goal of the teaching, the Dhamma.

While accepting Jade's and Ruben's answers, I'd like to add something that I've read about talipot fan.

If we look at the story of seventh verse of Arahanta Vagga in the book, "The Dhammapada - Pali text & translation with stories in brief & notes" (1963) by Ven. Narada, it has mentioned that;

"While attempting to awaken, with his fan, a pupil novice who was thought to be asleep, a teacher accidentally injured the pupil's eye. Later, when the teacher tried to close the door, he injured the pupil's hand too. But the pupil showed no resentment at the carelessness of his teacher. He was well trained. The Buddha praised him"

So, the origin of talipot fan may considered to be from India during Tathagata's time.

In the book, "An Historical Relation of the Island Ceylon in the East-Indies" (1681) by Robert Knox, it has mentioned that;

"It is a yellow coat gathered together about their waist, and comes over their left shoulder, girt about with a belt of fine pack-thread. Their heads are shaved, and they go bare-headed and carry in their hands a round fan with a wooden handle, which is to keep the sun off their hands.

They have the honour of carrying the Tallipot with the broad end over their heads foremost; which none but the kings does: wheresoever they come, they have a mat and a white cloth laid over upon a stool for them to sit upon; which is also an honour used only to the king."

Nowadays in Sri Lanka when a Thero receives an honorary title, he is presented with a decorated talipot (vijinipath) and a scroll.

From the story of Goddess Laja, we can see that Venerable Mahakashyapa had used the word "vijinipath = talipot fan" without describing it. So it could have been a common instrument at that time also. From these, we can conclude that talipot fan was used from ancient time.

"Goddess, disappear l said. Erudite preachers of the future who mount pulpits with vijinipath in their hand should not be heard to say that a certain goddess came down to help Venerable Mahakashyapa with his day to day chores. Now, go away and never come again."

Not the answer you're looking for? Browse other questions tagged academic-buddhism or ask your own question.

0
Do the texts of Mahayana Buddhism or those of any other school posit that everything is to be regarded as ideation? (Idealism)