What would be the relationship between mindfulness, enlightenment and incubation?

Incubation is one of the four proposed stages of creativity, which are preparation, incubation, illumination, and verification. Incubation is defined as, when attending to a different task, humans forget about the previous unsuccessful attempts and can engage with the task anew, often leading to finding the solution. Incubation is related to intuition and insight in that it is the unconscious part of a process whereby an intuition may become validated as an insight. Incubation substantially increases the odds of solving a problem, and benefits from long incubation periods with low cognitive workloads.

I see that incubation is what essentially what Buddhism would call as "enlightenment":

The experience of leaving a problem for a period of time and then finding that the difficulty evaporates on returning to the problem, or, even more striking, that the solution "comes out of the blue" when thinking about something else, is widespread. Many guides to effective thinking and problem solving advise the reader to set problems aside for a time.

However, incubation seems to be directly contradict with mindfulness (be here now), as it can be essentially summed up as:

Is my understanding correct?

Their principle relation is they are merely words and concepts with obvious and less obvious "mental molding". Mindful of the process or not, setting aside or not, we can not fully explain in words even the simplest of sensations, like lifting your arm, or the taste of fruit. Words are extremely limiting if you truly want to describe your complete experience of reality. For example, if you see a "table", you will limit your perception and mentally push aside the potential of this object being a drum, a raft, or firewood.

As long as one thinks of enlightenment as the "solution", they will "push aside" the reality right in front of them. Attainment does not "promote" one vision of reality over all other ones. It is the concepts limiting our vision of reality that are shown to be void of distinction.

The same goes for "incubation". Most "problems" are mental constructs based on language and grammar. For example, in Indo-Germanic languages such as English, a verb must have an object. So we get strange constructions like "it's raining", or "problems have dimensions" and think of these constructs as real. What you describe as incubation is used in some Buddhist schools in some form or another, for example with Zen Koans. It is however not the same the experience as attainment. It's more like a "mental tripwire" that a teacher will set up, that lets your mind stumble out of its preconceptions, for just a moment. The "lightning that strikes" at this moment is a glimpse of reality before it is conceptualized. 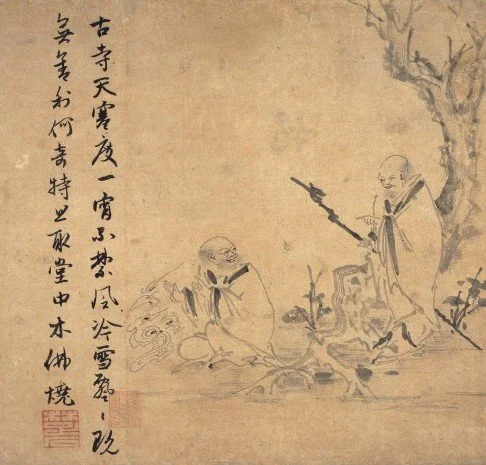 On a cold winter night, a big snow storm hit the city and the temple where Dan Xia served as a Monk got snowed in. Soon it ran out of heating fuel and everybody was shivering in the cold.

Dan Xia began to remove the wooden Buddha Statues from the display and put them into the fireplace.

"What are you doing?" the monks asked. "You are burning our holy religious artifacts! You are insulting the Buddha!"

"Are these statues alive and do they have Buddha nature?" asked Master Dan Xia.

"Of course not," replied the monks. "They are made of wood. They cannot have Buddha Nature."

"Then they are just pieces of firewood and therefore can be used as heating fuel," said Master Dan Xia. "Can you pass me another piece of firewood please? I need some warmth."

The next day, the snow storm had gone and Dan Xia went into town and brought back some replacement Buddha Statues. After putting them on the displays, he began to kneel down and burn incense sticks to them.

"Are you worshiping firewood?" asked the monks.

"No. I am treating these statues as holy artifacts and am honoring the Buddha." replied Dan Xia.

Mindfulness means to recollect, bring to mind & keep in mind preexisting, even learned, knowledge/understanding, as follows:

In other words, mindfulness is about obedience & conformity rather than about individual creativity. It follows Buddhist mindfulness has no relationship to the Wallas staged model of creativity.

In the Wallas stage model, creative insights and illuminations may be explained by a process consisting of 5 stages:

(i) preparation (preparatory work on a problem that focuses the individual's mind on the problem and explores the problem's dimensions),

(ii) incubation (where the problem is internalized into the unconscious mind and nothing appears externally to be happening),

(iii) intimation (the creative person gets a "feeling" that a solution is on its way),

(iv) illumination or insight (where the creative idea bursts forth from its preconscious processing into conscious awareness);

(v) verification (where the idea is consciously verified, elaborated, and then applied).

Not the answer you're looking for? Browse other questions tagged mindfulness enlightenment psychology or ask your own question.