I recently posted on the Islam site that we (Muslim) could consider Gautama Buddha as a prophet in our sense. I have originally put three different questions here; now I put two separately; under this title I leave the question of courtesy whether Buddhists would rather appreciate or oppose to it if I would call Gautama Buddha a prophet in the sense of Islam (not a prophet of Islam), knowing that the relation between both religions is not entirely peaceful (which I, personally, regret)

Thank you for your feedback

the-buddha god islam
Share
Improve this question
edited May 2 at 12:32

You see friend, it's a sad state of affairs. Even the Buddhists of this site reject your respect of our teacher on the grounds that your faith is wrong in their eyes. And if your faith is "wrong", your respect must be misplaced, is that what we are saying? What a shame!

You know what? You actually are free to respect whoever is worthy of respect, it's up to you to measure your respect and give him a title of Prophet, or a Wise One, or an Awakened One, or whatever title you see fit.

So thank you for making this step and stretching your hand across the divide, brother. I'm confident this step is right and the history will confirm it.

To add another answer, similar to the questioner, Muslim scholars in the distance past appeared to have a superficial and/or inaccurate understanding of Buddhism, despite their praises. For example:

These people [Buddhists of Khurasan] are the most generous of all the inhabitants of the earth and of all the religionists. This is because their prophet Budhasaf [Bodhisattva] has taught them that the greatest sin, which should never be thought of or committed, is the utterance of “No.” Hence they act upon this advice; they regard the uttering of “No” as an act of Satan. And it is their very religion to banish Satan.

By 12th century, al-Shahrastani also repeated al-Biruni’s account of Buddhism in his book entitled The Book of Religions and Creeds (Kitab al-Milal wa al-Nihal). Al-Shahrastani (1992) placed the Buddha's position as Prophet Khidir which can be summarized as follows:

Buddha was an ideal human. He was not born, did not get old, and even did not die. He avoided the pleasure of eating, drinking and remained celibate all his life. He was a perfect ascetic and an exemplary model for his disciples. Accordingly, a Buddhist can be defined as a seeker of truth, a practitioner of various ascetic works, and a holder of the deepest sense of inner morality. Buddhist ethical practices include having patience, giving alms, renouncing this world, abstaining from greed and worldly pleasure, and showing compassion for all creatures. Thus, a Buddhist is required to live an ethically correct life. In addition to practicing these ascetic disciplines, a Buddhist is encouraged to pursue spiritual perfection. He must enhance his intelligence and seek a higher existence. By doing so, he can liberate himself from this lower world that is destined to decline, live in the eternal world, and eventually be led to the presence of divine beings. Buddhism places importance on ascetic disciplines and spiritual endeavor. At the end of this description, Shahrastani states that Buddha in the Buddhist context can be compared to Khaḍir (Khiḍr), a legendary Islamic saint whose existence is taken for granted by Muslims.

From: Muslim scholar’s discourse on Buddhism: a literature on Buddha’s position 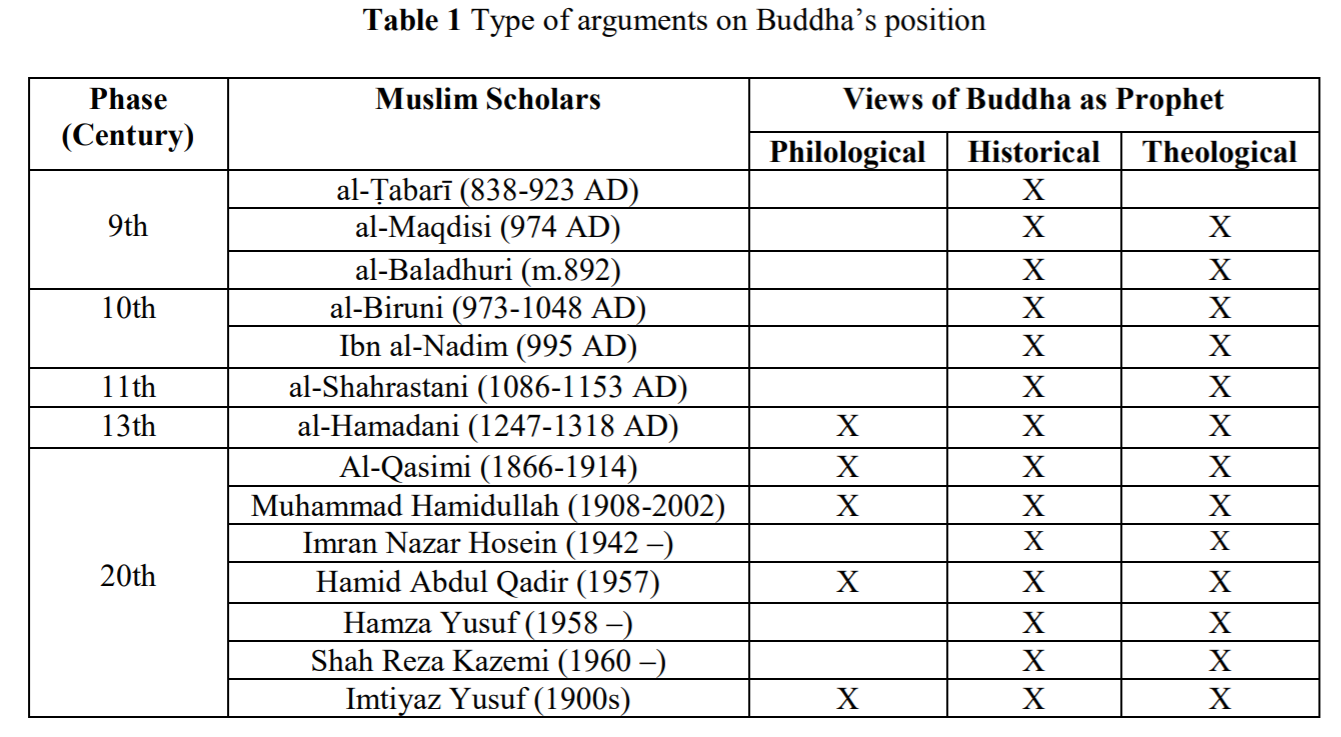 Can Gauthama Buddha be seen as a Prophet by Islam

I think that the narrow or literal answer to your question is "no" -- that the Buddha is not one of the 25 prophets according to Islam.

Would Buddhists agree to such title?

There are some forms of Buddhism, where people seem to worship or revere the Buddha as if he were a God.

But I think that perhaps most Buddhists see the Buddha as a teacher, and as a good or finished example (an exemplary human being). He taught people the "right way" -- and to that extent he is like a Prophet -- more like a Prophet than like a God.

Even so, I don't know what Christians think of Islam's describing Jesus as a Prophet -- perhaps Buddhists might feel similarly about the Buddha being described like that.

I think that the most of his teaching was to describe ethics, laws of nature and laws of psychology (i.e. how the mind works), and details about the proper way for Buddhist monks to behave -- so most of the doctrine isn't about God or Gods.

The doctrine tends to emphasise that people rise or fall because of their own actions, their own efforts, their own intentions -- and not because of rituals carried out by priests ("brahmans") -- see for example SN 42.6.

That's perhaps a central doctrine, and so to that extent I'd say that the doctrine has little to say about the Hindu Gods (it does say some things), and little or nothing about worshipping them.

There's a modern branch of Buddhism -- see Secular Buddhism -- which more or less ignores any supernatural aspects of the Buddhist doctrine.

There are some people of or from other (non-Buddhist) faiths -- Christians and Jews -- who study Buddhist doctrine and who apparently find it worthwhile. I think that Buddhism includes a useful description of human life -- what makes people happy or unhappy, good or bad, satisfied or unsatisfied.

But I think that Buddhism doesn't teach "there is one God" and so on (and at least to that extent isn't Islamic). Apart from that the two religions may have common ground, shared values -- the "Major virtues' listed here, for example, have analogues in Buddhism. I don't know why "obedience" isn't in that list, but that too.

Still there are different schools of Buddhism, and some of the schools put more emphasis than others on "Deities". I'm not sure whether (I doubt whether) these "Deities" are strictly analogous to what you'd call a God or Gods in another religion. For example Tara (Buddhism) says,

Tārā is a meditation deity worshiped by practitioners of the Tibetan branch of Vajrayana Buddhism to develop certain inner qualities and to understand outer, inner and secret teachings such as karuṇā (compassion), mettā (loving-kindness), and shunyata (emptiness). Tārā may more properly be understood as different aspects of the same quality, as bodhisattvas are often considered personifications of Buddhist methods.

Sorry if this answer seems full of self-contradictions -- I hope it consists of statements which are partly true.

Islam, for the most part, does not appear to worship the Law of Liberation but, instead, worships the Creator. In Buddhism, the Creator of this world is craving or lust, per SN 12.44.

It follows the Buddha cannot be seen as a prophet by Islam because Islam, like the Jews, worship creation and the flesh and material things of this world and rejects monasticism. Even where Islam encourages renunciation of the world, namely, zuhd, it, per the Koran, rejects monasticism.

In summary, Islam is predominantly a doctrine of social morality for the world rather than a doctrine of liberation from the world. A most positive thing a Buddhist can approve of in relation to Islam is the Koran says: "There is no compulsion in religion". Actual history shows many different religions coexisted under the political system of Islam, which included Buddhism in Persia for around 500 years (before the Turks and then Mongols harmed the Islamic culture).

There are Buddhists who practice in a purely religious mode — a mode of rites, rituals, and obligations, or where Buddha is conceived as a transcendental being on a different plane of existence who can be worshipped and appealed to — and such buddhists might take offense at what they perceive as Islam co-opting or distorting the faith. I imagine most of the frictions we find between Buddhism and Islam (e.g., Myanmar) are of that nature, where Islam is seen as an encroachment that must be defended against.

Buddhists in the more mystical or philosophical mode don't reify or deify the Buddha in that way. Buddha for them is a man who awakened, and who showed a path to awakening that we might all follow. Such Buddhists would greet the idea of 'Buddha as a prophet' with (perhaps) a raised eyebrow: an unnecessary wrinkle in the fabric of the practice, one that could only lead to attachments and conflicts. However, such Buddhists are likely to eschew the very concept of 'prophet', which would likely unsettle devout Muslims.

The problem we consistently see in the world is that every faith starts with the pure goal of salvation — attaining a state of peace, grace, love, joy, etc. — but most faiths eventually collapse into a fear-state, where they perceive other faiths as overt threats to their own system of salvation. Once they collapse that way, they begin to practice brutality, vindictiveness, hatred, and everything that contradicts their own sense of salvation, merely because they are afraid of losing that salvation. It is the epitome of cutting off one's nose to spite one's face. Buddhism has something of an advantage in this regard because Buddhist salvation is rooted in emptiness, and emptiness is difficult to translate into a fear-derived opposite, but they are not immune to the effect. I'd suggest that instead of trying to morph buddha into a prophet (which might be greeted with raised hackles or irritatingly studied indifference, depending), it would be better to embrace buddhism (or any faith) as a sister-faith: an intrinsically different system that leads to the same goal. Much easier on everyone...

"... question of courtesy whether Buddhists would rather appreciate or oppose to it ..."

If the intent is to show respect and veneration towards the Buddha and his teachings even if you are not Buddhist but follow another religion, then I would absolutely welcome this kind act. Further, I would offer that you are providing a testament to your own religion by showing such a good example of kindness and respect.

Here's how Islam works think of the BhavaCakra... twelve links of causation. One pictures oneself in the Yama position: In Islams case? Yama becomes Allah/God/Brahma whatever then the twelve nidana get called sons or "Mohammad".

Same thing with Christianity with the twelve "saints". Of course the difference? Allah is in fact the name of god to the Islamic people.

Christians are still playing scape goat with their "gods" name. The god of Abraham... is all they feel comfortable with as a name.

So If Allah wanted to be Christian he would just have to be called: The god of Mohammad.

Who knows who knows is the best answer to whom someone's "god" is... diarrhea for many becomes "god" really quick in search of a bathroom or else boom right there in the robes without a single thought about it. In such a case... How is that not: "Zen mind, beginners mind"?

Not the answer you're looking for? Browse other questions tagged the-buddha god islam or ask your own question.