I recall reading words or translations in the Pali suttas suggesting the following:

Today, I read a post soliciting for donations on a Buddhist forum for a sick non-Buddhist. Since the time of the post, no one has given a donation, except me. Because I am simple minded & a sucker for bleeding hearts, I gave a US$37 dollar donation, to symbolize the 37 bodhipakkhiyādhammā, which include the 7 factors of enlightenment, which, according to the suttas, cure disease & illness.

sure is it that good householder's intent is not so kusala provoking intended, but anyway my person will answer for what ever, who ever, can be healed:

Not at all, but always good to give to the sick. Not a single being not worthy to receive the basic means for life, even if a 'bad' one. Sure, such merits are most in sphere of Sila in ones relation or not that upwardly, yet secure not usuall fall down and keep ones level.

One can not force or stop anothers beings actions, kamma, nor fruits. Yet one can provide with conditions that certain fruits could ripe. What one gives he gain and given can be only what one has gained/one has. Taking on given is the receivers thing, being touched and where.

**There are five proper times/occasions, always good to give and toward anyone, even if not beloved, enemy, bad: **

One isn't urged to control or teach other lessons since most not even able to have oneself under control. Such thought's a strong connected with defilements and wrong view. If really wise, one gives always if one is able to without harm (against precepts, rules bond to)

If I am not giving donations to the Noble Sangha, but, instead, blocking the Law of Karma punishing a non-Buddhist, am I incurring demerit against myself, which could lead to rebirth in a lower realm?

Sure, if deliberately seeking of non-support of the Noble Sangha, being an outcast, one is sure to walk straight toward hell. Yet, not to forget is that ones perception counts of what is perceived and how to react on it. As for giving to the Sangha, even if defacto only perceived as such, not Noble yet, see 'former' Bhante Varados last suspicious gift before he actually headed toward highest, gained firm path of release:

Supreme leader of the Dhamma is the Buddha, and if perceiving the Tatagatha, one is wise to be quick. It's always of high results to give toward the Sangha of the Buddhas disciples (monks). As for Johann, good householder wouldn't be able, since he had turned over the bowl long time ago toward householder Dhammadhatu and those bound to him.

(And serious asked: aside that there is NO way one could make my person receive money even indirectly and seldom one would meet even other possibility if no Upanissaya, even if strong wishing, does good householder think that in good ten years dwelling as beggar in spheres good householder dwells even the effort of giving a spoon of rice was made? If not simply sharing forward the merits of others, there wouldn't be any reason to enter this outwardly homeland of marxists and traders void of basics. As if a monk would look for alms under not so wise Devas or hundry ghosts.)

What is the karmic destination of the troll, who solicits donations from Buddhists for non-Buddhists?

It's not a matter whether Buddhist or non in regard of giving at the first four proper times. If one lives in dependency of the Buddhaparisa and in certain corrupt way leads their wealth outside, such is of course demeritious. As for praise and prefer of what is to be blamed or minor, such leads also downwardly. As for 'troll': Three things are praised, encouraged by wise: support of parents, generosity, go forth. Someone calls someone encouraging toward generosity, even at certain right time, is therefore to be seen as fool.

Often has good householder be told about the unfortune Moneylender, heirless and not able to enjoy his whealth as he destroyed his merits by having doubts later... disregarded Sublime.

And as the Buddha warned, less more harmful for oneself as to discourage others from doing good, generosity.

So may good householder have ways to possible not fulfill a complete transgression, or finds ways to confess and apologize, so that, aside of not able to run away from the poorness he will meet, may be able to wander on.

As the Buddha told: be quick!

While such are kusala thought, they are bond to heavens, Samsara. If able to practice vosaga, real giving and abound desires after garlands of the mind at all, if such done as effect of insight: much mudita, yet in householders really bad situation, possible difficult before not having solved old and out of the hole of transression.

Addition because useful for understanding the comments since easy disappearing often: 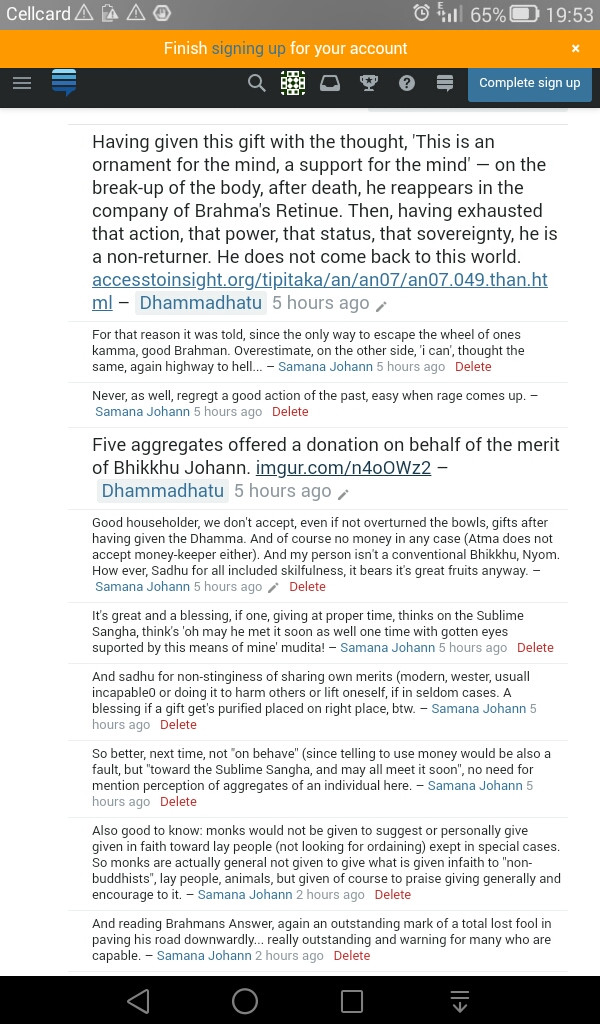 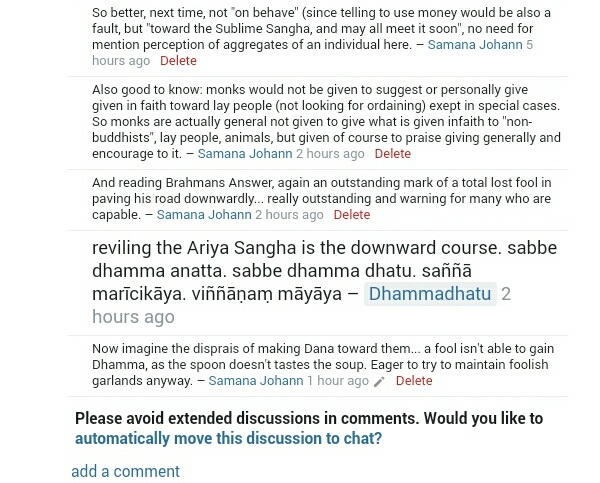 And at least, in regard of householders bad advise, in his answer, to do not seek for the Noble Ones for ones generosity: Indeed, Noble Ones, at least an Arahat, is not in need, or wishes for gifts, yet not only Dhammadhatu would need a punsh of merits and really a missery when cutted off by ones stupidy... encouraging public to don't give toward the Sangha in a Dhammic room, possing there to be a wise and Noble one.

[Note that this isn't given for stacks, exchange, other world-binding trades but for an escape from this wheel]

I have only ever read one sutta that implies the above, namely, MN 135. Since MN 135 is addressed to a Brahmin, it is obviously fake dharma. If MN 135 was true, it would have been taught to many Buddhists in many suttas.

If I am not giving donations to the Noble Sangha, but, instead, blocking the Law of Karma punishing a non-Buddhist, am I incurring demerit against myself, which could lead to rebirth in a lower realm? In other words, should I practise equanimity?

No. The bhikkhus are well looked after. They have sufficient requisites.

What is the karmic destination of a troll that solicits donations from Buddhists for non-Buddhists?

Good destination because the troll has faith in the universal goodness & compassion of Buddhists.

Yes. Past life determination is superstition. Buddhism teaches any type of rupa (physical form) can be subject to illness & injury. Also, Buddhism teaches unimpaired physical & mental faculties assist in enlightenment. Therefore, we should, as best as possible, according to our means, help a man preserve his remaining eye sight. Metta-karuna is one of the greatest things.

Not the answer you're looking for? Browse other questions tagged pali-canon papanca fetters bodhipakkhiyadhamma or ask your own question.

1
Was anapanasati and other meditations ever taught to lay followers?

3
Where in the Pali Canon does it give examples of right livelihood and it's opposite
4
Where does the Buddha mention a craving for non-existence?
2
Which suttas in the Pali canon give instructions for how to cultivate equanimity?
1
What titles apply to non-monastic/lay Buddhists? (upasaka/upasika savaka/sravaka)
3
A person being enlightened by a non-enlightened
1
Can someone give references of the four stages of enlightenment in the four major Nikayas?
3
Does Buddhism give methods to ask questions when you are proliferating?
1
Recalling Neither Perception nor Non-Perception for Nimittas