Keeping a pet cat, without training or encouraging it to kill rats

Let's say a lay Buddhist has a rat infestation problem in his or her house.

Catching rats using traps and killing them is clearly breaking the first precept of not taking a life.

What about keeping a pet cat that is sufficiently well fed and taken care of, in the house, without training or encouraging it to catch rats, but nevertheless accepting the possibility that the cat may or may not choose to catch and kill rats, on its own volition, that it may find in the house?

If the pet cat does catch and kill rats, does this break the first precept?

Also, introducing a pet cat, may cause the rats to flee the house on their own, as they may find that it has become an unsuitable place to live in.

Serious or bored? Nevertheless, the kind of approach is why Bhikkhus are not given to share food or thing to householder, or "keep" them, take care of them, not to speak of animals, good householder.

Why seeking association with pets at first place? To gain an existance of a special animal in a vegan/vegetarian existance?

As for the moralistic-issue, maybe Ven. Kassapa is able to wake up good householder from his dreams:

One day, however, when Pipphali Kassapa was inspecting the fields, it happened that he saw, as if with new eyes, what he had seen so often before. He observed that when his people plowed, many birds gathered and eagerly picked the worms from the furrows. This sight, so common to a farmer, now startled him. It now struck him forcefully that what brought him his wealth, the produce of his fields, was bound up with the suffering of other living beings. His livelihood was purchased with the death of so many worms and other little creatures living in the soil. Thinking about this, he asked one of his laborers: "Who will have to bear the consequences of such an action?" — "You yourself, sir," was the answer.

Shaken by that insight into kammic retribution, he went home and reflected: "If I have to carry along the burden of guilt for that killing, what use is all that wealth to me? It will be better if I give it all to Bhadda and go forth into the ascetic's life."...

If it was a practical question: there is no problem in catching them in "box-traps", releasing them elsewhere.

To avoid them settle, like with all, don't give ways to food and shelter places.

Living with generations of forest-rats and snakes afyer them, and... my person made a wall around the rats favorite place in the cave (to more avoid falling dirt, babies snakes on ones rest and sleep place), seperated them, leaving them the generation old dwelling of their clan, and they became a seperate entrance from and out into the forest.

[note that this isn't given for stacks, exchange, other world-binding trades or for kepping, racing and feeding on pets, nor as food for pets]

If there is a rat infestation the best action is to take necessary measures so the environment is not suitable for rats. It is not possible to eradicate rat infestation by killing them.

It depends on the intention behind getting the cat in the first place. Would the cat still be gotten if there weren't a rat infestation? If there's the slightest trace of accepting that the cat may or may not kill rats, it would be unwholesome. I'm not sure if it breaks the first precept but it's surely unwholesome.

What if the cat becomes sick or injured? Would you then have to kill it yourself or take it to the vet and have to make the decision that it has to be put down due to its injuries or illness?

I think in the end infestations are mainly humans own fault. Often people leave food out which attracts animals. So we should work on ourselves and try to become more aware of our actions.

I have adopting cats for decades. Get a lazy or non aggressive cat then it normally wont chase and kill the rats but rather scare them away. Hopefully it wont become friend with the rats. 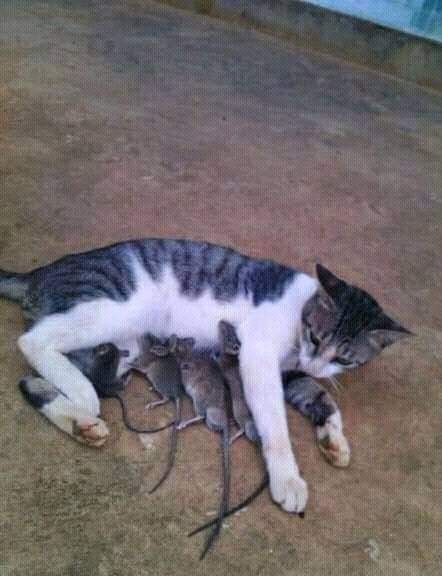 In this case, it wont break the precept.

2
Possible to intentionally kill without "intention"?