I saw many images of the circle of existence represented with Yama, the lord of death, with a tiger skin and a third eye. Why is he represented in this way? 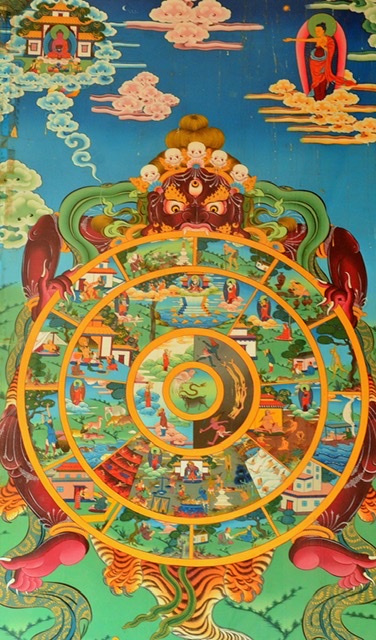 I believe that it is a depiction of Mahakala, rather than Yama.

In the Chinese Buddhist Encyclopedia page Mahakala is a Protector of all Tibetan Buddhism, we find this info:

The Form varies according to the different teaching lineages. For example, there is the two-armed, big-mouthed Mahakala Bernakchen of the Karma Kagyu, the four-armed Mahakala who is protector of the Drikung Kagyu, and six-armed Mahakala of the Gelugpas described below. They are not all wrathful forms of Chenresi [Skt.: Avalokiteshvara) although:

"There is an emanation of Avalokiteshvara which arose in the Form of Mahakala and this is the Shangpa Kagyu Mahakala with one face and six arms, in a standing posture. This Form was later adopted by Tsongkhapa and followers as the main protector of the Gelugpa School.

Mahakalas can arise from various sources namely Vajradhara and the Anuttarayoga Tantras but are not generically Avalokiteshvara."

There is a white one associated with prosperity, and also a eunuch and some feminine forms, but it is incorrectly held that there are 75 variants.

Regarding the symbolism around Mahakala:

Symbolism of Mahakala in the 6-armed Manifestation:

The Protector's Body is midnight blue, symbolic of the changeless Dharmakaya.

His three eyes symbolize his Knowledge of the past, present and future, and also the manifestation of the three bodies of Buddha.

The crown adorned with five skulls symbolizes the transformation of the five poisons of Anger, desire, Ignorance, jealousy and pride into The Five Wisdoms.

His six arms symbolize the attainment of the six Perfections: Generosity, Patience, Morality, Diligence, Meditation and Wisdom. The kartika or triku [or trigu, pron. tigu] the Ritual curved knife, cuts Attachment to ego.

The kapila or skull bowl filled with blood symbolizes the subjugation of the maras or Evil ones. (An alternate interpretation can be found in other contexts.)

The rosary symbolizes his continuous activity for the benefit of beings.

The Damaru or hand-drum symbolizes his Power over the Dakinis. (Also, different interpretations in other contexts.)

His trident symbolizes his Power over The Three Kayas -- the spheres of desire, Form and formlessness. (An alternate interpretation can also be found.)

The lasso binds those who break their vows.

His two feet are the means and the Wisdom to accomplish his task. That his left leg is straight and his right leg bent symbolize his accomplishment of the benefit to oneself and to others. He tramples on a vinayaka, to symbolize his destruction and dispersal of great obstacles.

The sun on which he stands symbolizes his illumination of the darkness of Ignorance.

His other ornaments together symbolize that he has all the qualities of a Buddha.

The material about the symbolism of 6-armed Mahakala derives from a Gelugpa sadhana (Ritual) of Tara that includes an Offering to Mahakala.

Not the answer you're looking for? Browse other questions tagged vajrayana samsara or ask your own question.

8
How did Buddha's teachings about samsara differ from earlier Indian tradition?
2
What force keeps you bonded to samsara?
2
Different transmissions for reciting various versions of a same mantra acc. to any of Vajrayana branches
0
why is all of Buddhas past lifes referes to times of kings
2
Is sky burial ritual inhumane and if not what is the reason for doing it?
4
Why are there so many different paths?
5
Do Mahayana Buddhists explain birth and extinction in the same way?
3
Does Vajrayana accept the idea that Buddha placed Lord Yama (a supposed Bodhisattva) in charge of the hell realms to ensure karmic retribution?
0
if deities are merely creations of mind,how can there be purelands?