Is violence or destruction ever correct?

In the introduction to Thich Nhat Hanh's Zen Keys, Philip Kapleau suggests there are times when one can or must rebel.

... In this type of creativity ow intuitive wisdom and joy are naturally brought into play.

All this does not mean, of course, that attempts at bettering working conditions and making work more meaningful, such as we are witnessing today as a reaction against robot-like mechanization of the workplace, are worthless. But for a worker constantly to resent his work or his supeliors, for him to become sloppy and slothful in his working habits, for him to become embittered toward life-these attitudes do most harm to the worker himself and serve little to change his working conditions. When it's time to work one works, nothing held back; when it's time to make changes one makes changes; when it's time to revolt one even revolts. In Zen everything is in the doing, not in the contemplating.

He doesn't elaborate. I found the line surprising. But Buddhists fight in Myanmar.

The Buddha warned against anger and his warning is quite precise:

And even if all those around us may be cruel, the Buddha says quite directly:

AN4.95:2.2: The person who practices to benefit neither themselves nor others...

AN4.95:3.1: The person who practices to benefit others, but not themselves, is better than that.

AN4.95:3.2: The person who practices to benefit themselves, but not others, is better than both of those.

AN4.95:3.3: But the person who practices to benefit both themselves and others is the foremost, best, chief, highest, and finest of the four.

From these words we can understand that we might be able to help others rebel against suffering. We can share the Noble Eightfold Path with those who will listen.

AN2.126:1.1: “There are two conditions for the arising of right view. What two? The words of another and proper attention.

That might be the ultimate rebellion. The rebellion against suffering.

While violence and destruction is strongly discouraged in Buddhism, it is ok for a ruler or government to establish police and armed forces to:

"What have you heard, Ananda: do the Vajjis duly protect and guard the arahats, so that those who have not come to the realm yet might do so, and those who have already come might live there in peace?"

"So long, Ananda, as this is the case, the growth of the Vajjis is to be expected, not their decline."

‘But sire, what are the noble duties of a wheel-turning monarch?’

‘Well then, my dear, relying only on principle—honoring, respecting, and venerating principle, having principle as your flag, banner, and authority — provide just protection and security for your court, troops, aristocrats, vassals, brahmins and householders, people of town and country, ascetics and brahmins, beasts and birds. Do not let injustice prevail in the realm. Pay money to the penniless in the realm.

Buddhist laypeople are expected to observe the five precepts. However, monks have to follow some 228 rules. It is not appropriate for a monk to condone violence and destruction.

Kapleau was of the the Ch'an/Zen lineage. In Zen (sometimes called the "Sudden Teaching") some schools will sometimes use verbal "violence" to bring the student to insight. In Zen history, it was not uncommon for Zen masters to hit their students to evoke Satori. In some famous Zen stories, the enlightened student sometimes hits back or scolds the master. This is what is meant by rebellion: the student is now on the same foot as the master, and the dynamics of their relation is changed. 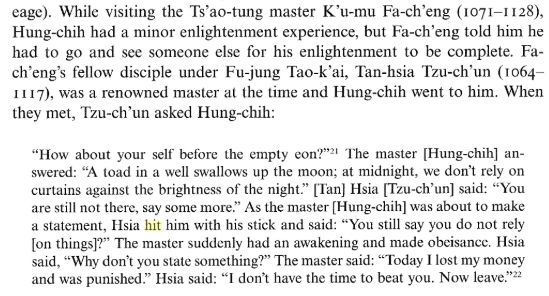 Given other sentences in the Introduction -- including, "It is out of this respect for the worth of every single object, animate as well as inanimate, that comes the desire to see things used properly, and not to be heedless or wasteful or destructive", and another about pleading for dialog based on mutual respect -- it doesn't occur to me to read this as a call to violence.

I don't know if you know the traditional story of the Buddha's leaving his father's palace, perhaps that is an example of "revolt" -- that's non-violent.

Or even if you're thinking of geopolitics, there are many modern historical examples of non-violent revolt.

I don't think there's much in the Pali suttas that I'd interpret as a call to violence -- see also other topics on this site about violence.

Zen is perhaps a bit peculiar. I think it was:

Various samurai clans struggled for power during the Kamakura and Ashikaga shogunates. Zen Buddhism spread among the samurai in the 13th century and helped to shape their standards of conduct, particularly overcoming the fear of death and killing, but among the general populace Pure Land Buddhism was favored.

"Pure Land" incidentally might mean something like (I oversimplify), "It's difficult to practice Buddhism in this world/life, let's hope the next will be better".

As for the samurai and their violence I get the impression, from Zen stories like the following, that non-violence and self-discipline and being unafraid was seen as better or more admirable than violence:

There are other stories, including at least two about a samurai being non-violently disarmed by masters of the tea ceremony.

In some schools of Buddhism, I'm not sure about Zen, there are ethical rules which are codified as the "precepts", e.g. "the five precepts" -- which include "no killing", "no lying", "no stealing", and so on.

I guess I imagine a samurai's attitude to violence as being like that -- they might feel that violence is sometimes forced upon them (e.g. by their social duty), even though non-violence is "better".

The Pali suttas analyze some of the mental states which lead to people arguing -- for example, "pride".

Not the answer you're looking for? Browse other questions tagged zen non-violence or ask your own question.

3
Did Buddhism ever go through a period of relatively high violence?
1
Was the Buddha against violence in all situations?
1
Justifiable violence in Buddhism?