Why are plants not sentient beings?

Why in Buddhism plants are not recognized as sentient beings?

Can it be immoral to kill a plant? Can a plant be reincarnated as an animal? Is a plant alive?

Edit: I read somewhere a theory according to which Buddhism did not consider plants as sentient beings, part of saṃsāra, because although they are alive they do not have the 5 khandhas and especially they do not have consciousness (viññāṇa) although they have perception (saññā). A sunflower perceives the sun and reacts by turning towards it but it is not conscious of its perception, it has no metacognition. I found this idea interesting but I don't know how true it is since Buddhism seems to define consciousness more as what allows discrimination than as what allows metacognition.

Can it be immoral to kill a plant?

It's contrary to the Vinaya for monks -- I don't know whether you consider that as implying that it's "immoral".

The common belief at the time of the Buddha was that plants (and even soil) were 'one-facultied life.' Today we have ecologically 'green' beliefs that are often equivalent — at least they seem to lead to much the same attitudes.[41] (In Thailand, forest monks are well known as the best protectors of the jungle.)

The eleventh Confession offence concerns destroying plant life. It originated because a bhikkhu harmed 'one-facultied life' by cutting down trees. He continued to cut down a tree even when the tree-deva asked him to stop, so she went and complained to the Buddha. This led to lay criticism of such behavior and a rule was set down:

"Intentionally damaging or destroying a living plant is [an offence of Confession.]"(Summary Paac. 11; See BMC p.294)

Therefore destroying a living plant — for instance, felling a tree, uprooting a flower, burning grass — is a Confession offence; as is picking fruit from a tree, a flower from a bush, etc. It is an offence of wrong-doing (dukka.ta) to damage or destroy fertile seeds or pips, or viable seedlings. (See Kappiya).

Bhikkhus who live in tropical forest monasteries constantly have to protect both the jungle and themselves. When paths are overgrown, snakes and other dangerous 'creepy-crawlies' can be trodden on — and bite back! There also may be a need for firebreaks. One way that forest monks cope with this is a daily routine of sweeping the paths. However they are not allowed to dig or clear the land.

The tenth Confession offence arose when bhikkhus dug the ground and got others to dig, and the local people criticized them because they considered the earth to be 'one-facultied life.' The rule is phrased like this:

Digging, breaking the surface of the earth, lighting a fire on it, pounding a stake into it are all disallowed. (If such 'earth' is more gravel or sand than 'soil' — and has no living creatures in it — it may then be dug.)

It is, however, allowable for monks to hint to laypeople or novices about what needs doing as long as the words or gestures fall short of a command. When bhikkhus need paths to be cleared, necessary work done on the ground, firebreaks made, etc., any lay attendant wanting to help should listen out for hints and indications: 'A post hole dug over there would be useful'; 'make this ground allowable,' etc. What is needed can then be clarified.

One practical and long term effect of these rules is that they have steered bhikkhus away from involvement in agriculture and land ownership. Such a development would also have isolated bhikkhus from the lay community because they would no longer have needed to depend on alms food.

An Introduction to Buddhist Ethics: Foundations, Values and Issues says on page 175, 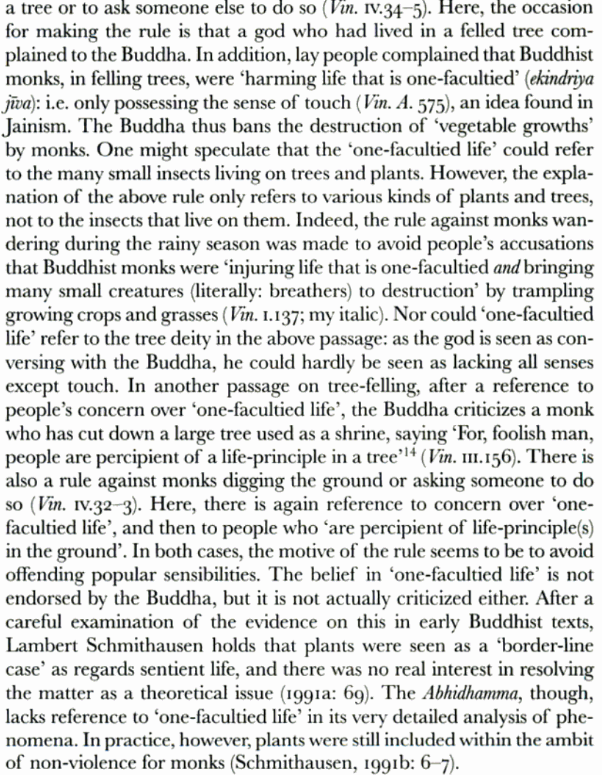 So "one-facultied" means "possessing the sense of touch". I guess that might imply non-sentient if it's incapable of thought -- or, it says, it's a "borderline" case.

It also says that people perceive them as alive and that it's therefore not seen as being harmless to kill them.

Whether they are actually sentient isn't stated e.g. by the Buddha, nor in the Abhidhamma.

There are too many possible, different interpretations of "rebirth" for there to be an authoritative answer on this. Secular Buddhism, the most modern iteration, says that genes and matter from one organism are eventually recycled into the species and ecosystem; as genes are passed to posterity and the body decays and is re-absorbed by other living organisms, one is physically "reborn" in that manner.

Other branches of Buddhism teach that "rebirth" happens day to day and moment by moment; one is re-born as an older version of one's past self, and hopefully as a wiser one, also.

Of course there are supernaturalist interpretations as well; that the soul is born into some other destination, as an angel or devil or animal of some sort. Ultimately, the teaching of "rebirth" is an all-inclusive one, and it expresses every possible relationship between cause and effect. One would have to be, literally, omniscient to fully understand rebirth -- how every cause is tied to every effect.

That is what makes the Buddha so special; in one moment he understood all of his own numerous past lives, and those of his ancestors; and how that made him who was was in his own present time. He was aware of karma of all other living beings as well; and that is why he, in his great compassion, taught them the dharma.

In short, while nobody, except for the Buddha, can possibly foresee how a plant could, over the course of many hundreds of millions of years, mutate into an animal or other lifeform -- they are a part of the cycle of samsara, and they do mutate, grow, and become "reborn" in some way. But of course, the Buddha never taught his disciples or lay followers to refrain from eating plants.

In Theravada (Pali), the 1st precept is about not destroying life that breathes (pāṇātipātī). The word 'pāṇā' means 'breath' and the word 'atipātī' means 'destroyer'. In other words, the term 'sentient being' is Mahayana. In Theravada, the Mahayana view of 'sentience', 'consciousness', 'perception', etc, is not relevant to the 1st precept.

I imagine, in the Buddha's time, before science, life that 'breathes' did not refer to plants. Plants cannot be seen to breath or exercise breath, such as via walking and moving.

It is not wrong to directly deprive plants of their life, in order to eat them, unlike animals, because they don't have all five aggregates. The first of the Five Precepts applies only to the taking of the life of sentient beings.

In my opinion, plants do not have mental formations and consciousness although they do have form, sensations and perception.

Without all five aggregates, plants are not sentient beings.

When the parts are assembled
we use the word ‘chariot’.
So too, when the aggregates are present
‘sentient being’ (satta) is the convention we use.

Because they are not sentient.

In the pali texts plants are considered living beings, are said to be born but are without that which is called mind, consciousness or intellect.

I guess they are classed as living beings because they are sustained by nutriment and are born from seed. They are becoming otherwise, are subject to old age, sickness and death.

They are composed of five elements; earth whatever density, water whatever liquidity, fire whatever heating fieryness, air whatever windy and space for whatever spatial.

Destroying plants is a minor offense in the Patimokkha, it isn't the same precepts as killing a human or animal.

As i understand it. A plant, unlike a cognizant being, is without elements which are derived from the essential elements, what is refered to as plant is then conceived & perceived as primary elements only, they do not serve as a ground for the element called mind, consciousness or intellect.

It is like a dead body, in that it is deprived of consciousness.

Plant is kind of like hair, it originates, grows and changes never serving as a base for hair-consciousness, unlike ie 'an eye' element, which in the Theravada Dhamma is a derived element also called 'a world' because it is that in the world which perceives and conceives the world with it's many elements derived and not derived.

What is that form which is the sphere of vision?

The eye, that is to say the sentient organ, derived from the four Great Phenomena, forming part of the nature of the self, invisible and reacting, (i.) depending on which eye, in consequence of some visible form, there has arisen, arises, will, or may arise

visual contact; … 177(ii.) and depending on which eye, in consequence of some visible form, there has arisen, arises, will, or may arise (born of that visual contact)

Thinking about mind we might see that the mind arises based on five senses or in and by itself. Thereforr it can be known that mind conceives and perceives visions, ideas or to perceives & conceives of and through other 5 doors:

Eyes are to perceive & conceive color&form through they eye door.

Ears are to perceive sound through ear door.

Nose is to perceive smell through the nose door.

Tongue is to perceive taste through the tongue door.

Body is to perceive bodily sensations though the body door.

When an object enters ‘the door of the eye’ or any of the other 5 senses, it enters also the door of ideation; ‘the door of the eye’ is included as a delineation of the spheres of the mind-base, included in what is called ‘mind-base’; it is mind-made. (for reference; M. i. 295 (see Caroline A.F, Rhys Davis, first translation of Dhammasanghani Psychological ethics))

There should be a Sutta where Sariputta expresses it, i saw Buddhagosa reference it for sure but i don't recall which text it was. This shouldn't need substation anyway because it's derived from statements like 'all dhamma are mind made'.

That which perceives and conceives the world in the world, namely the mind, the eyes and other doors.

Hair is just hair, it is not a sense door neither are plants or parts of a plant.

Plants not having perception means that internal mind element is not generated internally.

Perception of a plant is thus only perceived & conceived externally, in dependence on 'internal mind element' which is generated internally or externally and which can be grasped with wrong view to be 'a self' or as 'belonging to a self' by this or that person.

Not the answer you're looking for? Browse other questions tagged rebirth consciousness samsara killing buddhist-cosmology or ask your own question.

1
Harmlessness to non-sentient nature and can consciousness (pure awareness) exist?

5
What is the equivalent scientific term for samsedaja? What kind of beings on earth are born from samsedaja?
7
Plants may be sentient beings like animals so how do you decide what to eat?
8
What will be the situation of the world when every beings will attain Nirvana?
16
If Rebirth is not taken literally then why seek Enlightenment?
4
How are the 31 planes of existence (especially Bṛhatphala planes) a practical metaphor?
6
How many dimensions are there according to Buddhism?
7
Does samsara exist or not exists?
3
Why are beings born?
1
Why are all the Buddhas born in Indian subcontinent only?