I have wanted to ask someone who is not familiar with a Buddhist culture how they might interpret this street art, which is generating controversy in a predominantly Buddhist country. 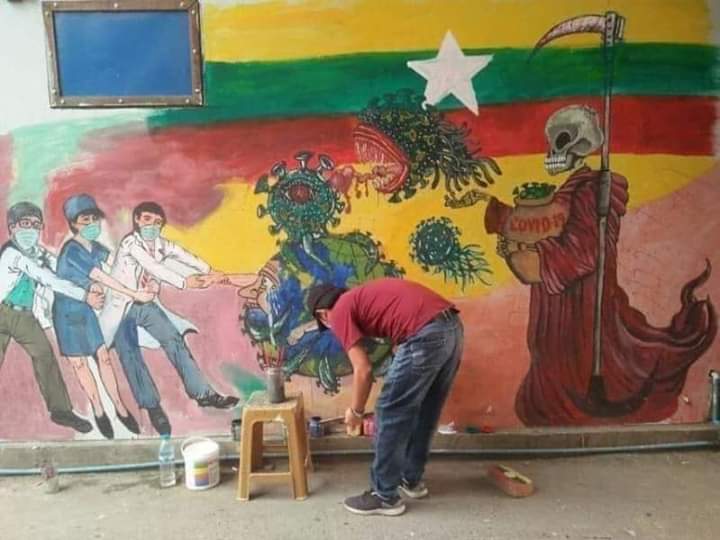 Covid is attacking the world (represented by the globe/planet).

It's entering the world (like the virus enters a biological cell).

The world is suffering (represented by the crying face).

The doctors and nurses (white lab coats and masks) are pulling together (working/cooperating) to help pull the world away from death.

It looks like death by drowning, they don't appear to be winning at the moment.

The sea-weed-like tail and teeth on the virus make it look like a deep-sea fish. I'm not sure what the red eye is meant to symbolise, except it's "Breaking the fourth wall".

The flag is Myanmar's.

I don't know about "death" and/or "father time" there -- represented with a scythe, which is an agricultural tool for cutting long grass and wheat and so on -- that's western imagery/iconography, is it eastern too?

Giving it the same colour as a monk's robe in Myanmar -- i.e. coloured maroon -- it's that I guess which is the "controversy" you're talking about (in the west, Death's robe would normally be grey or black -- coincidentally about the colour of a Christian monk's cassock).

The figure's tall/straight back, and bowl, look a bit like a monk's also.

Perhaps it's being interpreted as a message that monks an/or Buddhism are spreading the disease somehow, and that modern medicine/medics are trying the save people?

Yes https://en.wikipedia.org/wiki/Death_(personification) does seem to imply that the Grim Reaper is or was typically western rather than eastern iconography. My guess is that the artist didn't intend to be anti-Buddhist, but did a bad job of translating the Grim Reaper. In the West it's depicted dressed (if it's dressed at all and not just a naked skeleton) in the robes of a Christian monk. I think that's not intended as an anti-Christian message, but comes from medieval times when it was intended to be seen and understood by monks -- in that context, "monks robes" were simply the ordinary clothing which they all (all monks) wore, so Death was wearing the robes of a departed Brother. Maybe tactless or controversial of the artist, though, to depict that as a Buddhist instead.

It is simply depicting coronavirus as a weapon of Mara (death) there is a person affected by the coronavirus and some people are trying to help that person. I am not sure of the background which seems like a flag. Then there is a video screen.

2
What is the reason for attributing Lord Buddha's statues to days the of week?
2
Examples of early Buddhist art
12
Buddhist view on Art and being an Artist
2
Why is there Hindu gods in this decorated wall in the Vihara of Bhaja
1
How can fiction writing be best used for achieving enlightenment?
2
What is Buddhism "for" (in favor of)?
4
What are the karmic consequences of writing horror / fantasy fiction?
2
Buddhism Thervada Tattoos
0
Need to know more about this art
2
Where are the main collections of digitized Buddhist art online?