What is the symbol sometimes depicted on images of the Buddha which looks like a swastika? 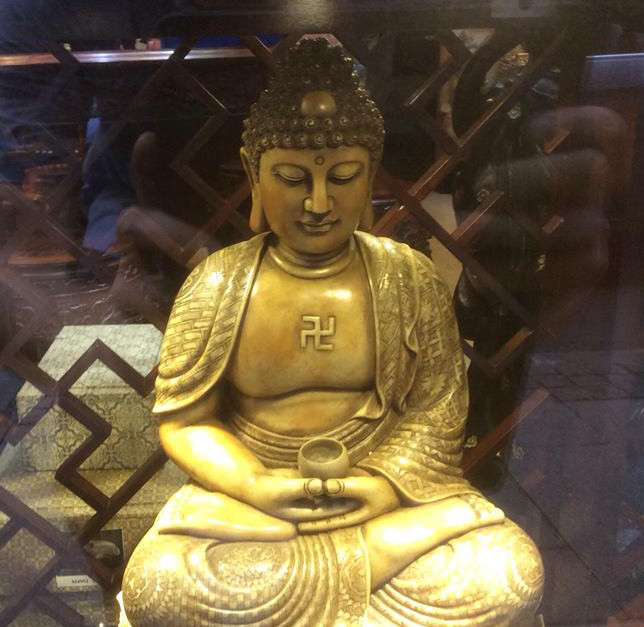 I often look up images of the Buddha online to use as desktop backgrounds for pc or phone. I've seen quite a few images that show a symbol that looks like a swastika on the Buddha's chest. What is the meaning of this symbol?

Buddha is said to have had 32 major physical characteristics, and the second feature among them is named,

This means, on the soles of Buddha's feet there's a wheel sign with thousand spokes.

It symbolizes auspiciousness and prosperity for Buddhists. This is the traditional Swastika, it is flat and counterclockwise while the Nazi swastika is tilted and clockwise.

Swastica is an ancient symbol of sun, rotation, wheel, cyclic activity esp. in nature, and by extension -- eternity. When German Nazis adopted a then-emerging theory of racial superiority of Germans, finding it well suiting their political goals, they took swastika as a symbol of their supposed identity with the Aryan race, and, more generally, inherent superiority.

Buddha, too, used the symbolism of Aryan superiority as a way to point to the holistic multi-dimensional excellence of Sat-Dharma and how it manifests outwardly in behavior of its practitioners. Such true excellence is beyond the concept of superiority, beyond any trace of conceit. In Mahayana we call this "unity of wisdom and compassion".

To weave in the solar symbolism, Buddha (and incidentally, Chogyam Trungpa) called himself a kinsman of sun. In my understanding, this is a reference to the message of positive constructive attitude inherent in Buddhist philosophy: taking on the universe with all its inherent problems, and winning (remember Buddha is often referred to as "Victor" in texts). In Chogyam Trungpa's explanation, the philosophy of Raising Sun is diametrically opposed to the philosophy of Setting Sun, because the latter relies on solving the problems through external means (feeling hot -- turn on the AC; feeling pain -- drop a pill of painkiller; feeling depressed -- watch a movie or smoke a joint), which too easily ends up encouraging weakness of character, while in the philosophy of Raising Sun, the problems are solved at a deeper, more holistic level.

So if I were to summarize the meaning of swastika as used in Buddhism I would say it is a symbol of true excellence transcending even the highest ideals, including the ideal of transcendental excellence itself; taking on the universe with all its inherent problems, and winning in the most fundamental sense.

It is the attitude of facing your darkest shadows; becoming a heir to Sat-Dharma and then coming back to the marketplace to share with people; embodying the eternal cycle of teachers and students, the Unconditional Buddha Nature.

In one word, it is a symbol of perfection.

Actually I think this symbol is associated with Jainism and not Buddhism. At least that is what one sees in India. The enlightened beings in Jainism are often depicted in similar postures as the Buddha and it is easy to mix them up. In India usually the Jain images are depicted naked. In the case of the picture above it could be a case of just mixing things up.

As far as I can recall in the traditional Theravada countries that symbol is not used at all. In India, more specifically at Sanchi, which was built at a time when the Buddha was represented with symbols instead of a human image, one mostly sees the Bodhi Tree, the Dhammacakka, and Footprints to represent the Buddha.

Not the answer you're looking for? Browse other questions tagged art iconography statue or ask your own question.

7
What is the reasoning for making a buddhist statue out of gold?
5
Did the Buddha discourage antropomorphic representations of himself?
6
Hair of the Buddha
12
Buddhist view on Art and being an Artist
4
Halo on the Buddha
5
Iconography in Buddhism - from the Greeks? And why isn't the Buddha bald?
2
Buddha statue of European/white likeness?
2
What is the significance of Reclining Buddha Statue in Laos compared to other countries in Asia?
1
When and why did the color orange (and yellow and 'red') become associated with Buddhism?
8
What should be a Buddhist's response to derogatory depictions of Buddhism?