What is Panchang Pranam in Buddhism and what is the correct way of doing it and its significance? Is it some sort of chanting?

I found the term "panchanga pranama" on the wikipedia page for Praṇāma. In Indian culture and Hinduism, this simply means prostration with five parts of the body touching the ground. 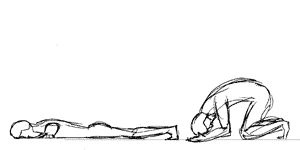 This is common in Buddhism and is known to be practised since the time of the Buddha, for e.g. from SN 22.1:

Then the householder Nakulapita went to the Blessed One and on arrival, having bowed down to him, sat to one side. As he was sitting there he said to the Blessed One, "Lord, I am a feeble old man, aged, advanced in years, having come to the last stage of life. I am afflicted in body & ailing with every moment. And it is only rarely that I get to see the Blessed One & the monks who nourish the heart. May the Blessed One teach me, may the Blessed One instruct me, for my long-term benefit & happiness."

Apparently, in Pali, this is called pañcanga-vandana, which I found in the essay by Ven. Khantipalo entitled "Lay Buddhist Practice: The Shrine Room, Uposatha Day, Rains Residence".

An example of reverentially reciting Pali incantations and prostrating respectfully before a Buddha image as described below, can be found in this YouTube video.

Dhamma is the way for training mind, speech and body. But the Buddha dhamma is sometimes regarded in a way which is too intellectual and theoretical so that there is a danger that it is not practiced as a way of training. To help with the training of the body there are various gestures which are expressions of one's confidence in and reverence for the three Treasures. These actions when performed with due mindfulness are wholesome kamma made by way of the body. Repeated frequently they become habitual bodily kamma and it is good to have the habit of reverence as part of one's character. The Buddha, soon after his Enlightenment, thought that to live without reverence was not suitable, so he looked around with the divine eye to find some teacher under whom he could live, revering him and his teachings. But he found no teacher superior to himself, nor any teaching superior to the Dhamma which he had discovered. But out of reverence for that Dhamma he decided to make the Dhamma his Teacher and to live revering Dhamma. We who are his followers should follow in his footsteps and live with reverence for those three aspects of Enlightenment: Buddha, Dhamma and Sangha.

The gestures used for this are mainly two: respectful salutation with the hands (añjalikamma), and the five-limb prostration (pañc'anga-vandana).

The first of these, which may be remembered as "añjali" as there is no satisfactory English equivalent, is made by bringing the palms of the hands together, and raising them to the region of the heart or higher, according to circumstances. For instance, in the shrine room after kneeling down in front of the Buddha image, one makes añjali before offering flowers, lights and incense. And as the Teacher was the highest in the world and one to go beyond the world, so one respects him by placing one's hand in añjali to the forehead. But while chanting, the hands are held in añjali at heart level. This action and others described here, should be done with mindfulness and therefore gracefully. And one should be careful to see that exaggerated and impetuous movements are avoided. As we remarked before, the Dhamma does not encourage unrestrained expressions of emotion, rather with its aid one endeavors to calm one's heart.

After all these preliminary remarks, we have just got into our shrine room, knelt down, made añjali and offered the three offerings. Now there are flowers placed in their vases or upon some offering tray, candles or lamps burning brightly and a blue column of incense smoke rising to the ceiling. It is time to pay one's respects with the whole body to the Teacher. When afterwards one says "Namo tassa..." that word "namo" (homage) comes from the root nam meaning "to bend." So now one bends oneself, one's mind and body, down and acknowledges that the Buddha was indeed the Perfectly Enlightened One that one's own understanding of Dhamma is insignificant. In the kneeling position, one's hand in añjali are raised to the forehead and then lowered to the floor so that the whole forearm to the elbow is on the ground, the elbow touching the knee. The hands, palm down, are four to six inches apart with just enough room for the forehead to be brought to the ground between them. Feet are still as for the kneeling position and the knees are about a foot apart. This is called the prostration with the five limbs, that is the forehead, the forearms, and the knees. This prostration is made three times, the first time to the Buddha, the second to the Dhamma, and the third to the Noble Sangha.

An ancient tradition from Thailand makes this more explicit as it adds a Pali formula to be chanted before each of the prostrations. Before the first one may chant:

The Arahant, the Buddha perfected by himself, the Exalted One
I bow low before the Exalted Buddha.

Before the second prostration:

The Dhamma well-expounded by the Exalted One
I bow low before the Dhamma.

And before the last one:

The Sangha of the Exalted One's disciples who have practiced well
I bow low before the Sangha.

Not the answer you're looking for? Browse other questions tagged philosophy or ask your own question.

14
What determines whether actions are good or bad?
3
How to accept things as-is and live according to as-is?
6
What is storehouse consciousness?
5
Is Buddhism Free will or Determinism
3
Which Buddhist sect do I belong to?
1
Is anything ever complete?
3
Scriptural evidence for the role and compatibility of polytheism within Buddhism?