How our body/soul is composition of five elements?

Recently I'm discussing five elements of nature with an atheist he cleared our body is composition of 11 elements Composition of the human body. 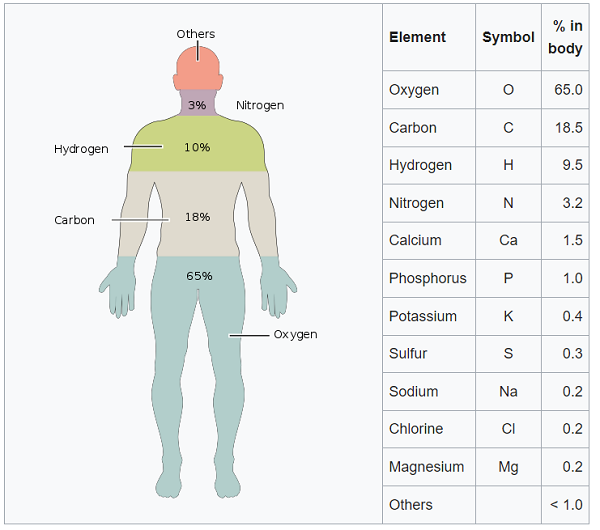 These elements are enough different from those 5 elements.

My reply to him :

"How we can say different, when those 11 elements are form of 5 elements and vice versa."

His clarification is as follows:

Form ? These are 5 elements in which Buddha believed -

For qualifying the definition of an element, it must be the smallest substance which cannot be broken into more forms. The Buddha was contemporary of Aristotle so this speculation was very famous at that time. Both philosophers believed in same speculation. I am quoting the critics of Aristotelian physics- Modern scholars differ in their opinions of whether Aristotle's physics were sufficiently based on empirical observations to qualify as science, or else whether they were derived primarily from philosophical speculation and thus fail to satisfy the scientific method-Aristotelian physics

So how our body/soul is composition of five elements of nature?
Is there have any sutta that explained? I'm assuming may there would have philosophical explanation.

I think the confusion is the meaning of the word "element".

Modern school children are taught that the word "element" has a physical/chemical meaning -- see (periodic table).

The English word "element" can be used in other ways though -- I could say, "the head, tail, and claws are 'elements' of a cat". Elements means that they are part of, which combine to create the cat, that the cat is composed of these elements.

"Element" can be used for non-concrete (i.e. abstract) words as well -- "the element of surprise" is a common phrase.

Or I could say, "Nouns and verbs are merely elements of grammar".

Westerners might be especially suspicious of the word "element" because it (or a word like it) was used by pre-modern scientists too -- see Classical element.

I think that in Buddhism the word refers to elements of experience -- and that the words represent subjective or perceived qualities of a thing. For example, I don't know, ice might be hard and wet and not-hot so it seems to be composed or (or is perceived as having) those two elements.

Is there have any sutta that explained? I'm assuming may there would have philosophical explanation.

Here for example is an academic analysis:

Suttas include MN 140 (as another answer already posted).

How our body/soul is composition of five elements?

There you are, most likely, talking about the five skandhas.

According to Theravada Buddhism a person (satva) is explained in terms of six major elements. Patavi,Apo,Tejo,vayo,Akasa (space) and vinnana (consciousness) The way I understand these elements are smaller than atoms. They are even not physical. The Buddhist term for them is Dathu.

Not the answer you're looking for? Browse other questions tagged soul or ask your own question.

0
Does "dhatu" in Pali refer to "elements of experience"?