What do you think of this article about romantic love? I am skeptical about his understanding of upeksha.

As I understand it, romantic love does not really exist in Buddhism because the targeted love in Buddhism loves everything without discrimination (which directly contradicts romantic love where you love your beloved more than a chair, for example. You don't want to share him/her).

Buddhism has two levels of teaching:

Non-worldly love is universal love of metta (refer to Sn 1.8); which does not include sexuality.

Worldly moral love is fidelity or loyalty to one person (refer to AN 4.55). Romantic love can exist within moral love however it is the non-romantic mutual life goals & qualities that are the most important criteria in Buddhism for a lasting relationship (refer to AN 4.55). If people engage in sexual relationship, in Buddhism, this is done without sharing your partner with others.

The key phrase is this answer — which Thich Nhat Hanh repeats a few times — is this:

Buddhism is a practice, and we can bring that practice into any human activity. It doesn't matter whether we are meditating, baking bread, weeding a vegetable patch, ruling a country, or building a family; if we bring the practice into the activity we will begin to resolve discontentment and misery. If we don't, we won't, because we'll be caught up in the tides of human discontent.

Keep in mind that the eight monastic precepts were intended to create a clear space, one free of most of the interpersonal interactions that make up much of the karmic world. Monasteries are designed to place each person alone with the universe, without distractions, making higher states easier to attain. Since romance and sexuality are intensely karmic — riddled with unconscious drives, personal ideals, social demands, joys and fears and practical consequences — they are usually excluded by monastic orders. A monastery that placed no restrictions on interpersonal relationships we quickly de-evolve into a village. A high-minded village, perhaps, but one that had lost that specific quality of being a clear space for transformation. But that doesn't apply to those who live in a village, where the karma of social life is unavoidable.

With respect to upeksha specifically, don't be confused by the way TNH is using the word love. When he says that love becomes 'all embracing' he doesn't mean that one comes to love the entire world romantically (which would be terribly confusing). He's referring to the contagious aspect of human attitudes. We all know that when an angry person walks into a room s'he stirs up emotions in others. People will 'catch' the anger and have visceral responses to it. We also know that people can 'catch' elements of peace and equanimity from someone who has walked far down the Buddhist path. Being in the presence of a master, by and of itself, can align us without effort. That is an aspect of human karma; we resonate with those around us. So when we bring the dharma into a personal relationship and reach a deep equanimity, that love radiates, and others resonate to it. Your love for another becomes all embracing in the same way that sunlight is all embracing: not because the sun reaches out to each person individually, but because light and warmth is pouring out of it unhindered.

Yes, well those four elements are the brahmaviharas.

I've seen those described as being the right/appropriate/good attitudes for all social relationships.

So, it makes sense that they'd be identified as appropriate for a romantic relationship too, isn't that right?

As you said, his definition of upeksha seems non-standard.

But Dhammawiki's definition of them includes this: 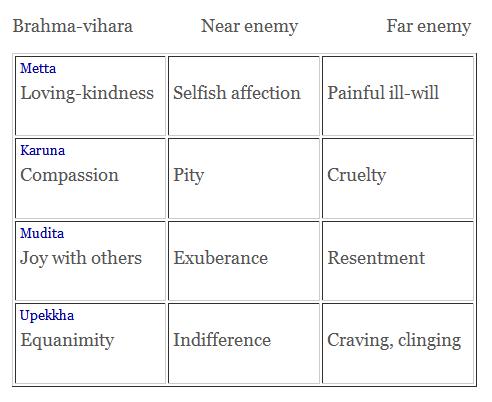 ... is at least compatible with the part of the standard definition which says that it is "not indifference".

I notice his answer doesn't mention self-view, identity-views, at all.

I think that the prescriptions from the suttas include non-craving, non-clinging ... non-hate, non-ignorance -- and non-self, "anatta", whatever that means.

Perhaps TNH touches on "non-self" in his definition of "upeksha" -- i.e. when he says that it's not about "my" happiness or "my" suffering.

It must be difficult -- and perhaps is part of a Buddha's genius -- to explain the Dhamma in a way that might be helpful to everyone, including people in a romantic relationship. If his definition or doctrine doesn't seem to be exactly what you've seen taught to monastics, maybe 'cut him some slack'.

He doesn't define what "romantic love" is, and neither does the question -- whether it means "flirting", "dating", "marriage", "family", or etc.

He does say at the end,

The other person will no longer be the only object of your love because your love will continue to grow and embrace all of us. Happiness becomes limitless, and that is the love of the Buddha.

I think that's compatible with the suttas.

This other answer was careful to point out, "this is done without sharing your partner with others".

And the question said, "You don't want to share him/her".

But consider also this answer, which includes,

Look for someone who is compatible in four ways:

Perhaps you can see that a partnership or a family can do good together, help themselves and others too, be generous.

Buddhism loves everything without discrimination

I'm not sure where you get that doctrine. The suttas seem to be more about dispassion ... and discrimination!

So the idea of "loving a chair" seems a bit foreign, even antithetical?

I don't know much at all about Mahayana doctrine, though.

There's some privilege for "sentient beings", isn't there? I.e. you'd be more considerate of a "sentient being" than of a "chair" for example, wouldn't you?

I don't know, perhaps you're saying something about "Buddha nature being in everything", or something like that.

Another topic I want to mention is morality.

I think that morality is ideal (prescribed) and essential (in practice), and that morality exists for "householders" and "family members" as it does also for monastics, though the form of morality, the expectations or responsibilities, the definition of what's considered moral behaviour, differ.

But every person is or was a son or daughter, if you're not a monastic then you might be a spouse or parent too -- and morality is important in that situation -- and IMO the doctrine of the Brahmaviharas is part of the doctrine about morality, i.e. the proper attitudes in social relationships.

Which is a good doctrine, albeit a very general doctrine -- widely applicable because it isn't overly specific.

Not the answer you're looking for? Browse other questions tagged lay-buddhism love marriage or ask your own question.

16
Any authentic sutta from any tradition that gives guidance on what kind of partner to choose?

4
What is "love" to a lay person?
6
Relationships : What is Love?
2
What does love means?
3
love and caring is suffering
0
What could go wrong if one misconstrue Buddhism with nihilism?
4
irrational fear of hell and damnation and spiralling, please help me?
1
"true love", compassion and suffering
3
When is it love? When is it attachment?
11
Buddhism broke up my marriage