What might be the impact when western monk start to think they must teach the elders? 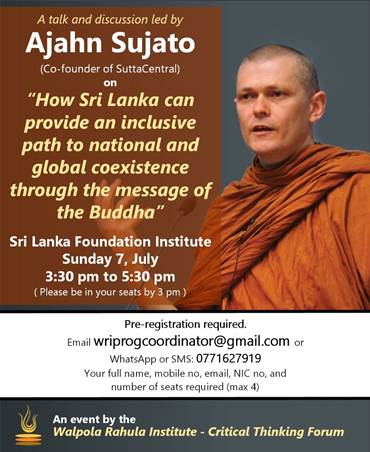 Would such, on even normal sociaty level, be contuctive for western people who desire odination? Is such in line with good conducts, monks would have to keep?

Speaking here as a Westerner. OyaMist suggests that this is a question that should be put aside. That person's (thatza haha) question should be put aside would require that the motive be known, for as a neutral question, it is a reasonable one and should be given a qualified answer.

The situation is this: The Dhamma is, in its initial steps (generosity, ethical conduct, self-discipline, mental development) very much in agreement with most people's idea of what is good. This leads the beginner to immediately assume he understands the system as a whole. That stuff about rebirth and not-self and kamma, that is all just a matter of details. So we have every sort of exploitation of the Dhamma going on by self-declared arahants, pompous academics, activist/destructivist politically-minded opportunist bhikkhus and blind fools and when they presume, because of the success they meet with in presenting their own version of Dhamma to an ignorant public, they learn to believe they are the only one who understands. That is, in their mind, a mandate to teach even elders and without careful consideration, leading many people astray. Our savior ... or The Defender of the Dhamma.

But how is one to stop this? It comes out in all sorts of disguises such as, for example, the case of an intelligent person with a little familiarity with the Dhamma who is nevertheless illiterate in English but who attempts again and again, here, there and everywhere, to teach English-speakers one and all (including elders) by way of asking loaded, sloppily worded questions with a subtle scent of 'I know better than you'. A case of astounding lack of self-awareness and hasty/careless disregard for his readers that would in most cases, where there was fear of blame and sense of shame, result in keeping quiet and getting on with one's studies. We need to understand motive. A case of high anxiety to teach reflecting a basic misunderstanding of the idea of letting go? A case of fear at one's destiny being over-compensated for by a desperate effort to create some good kamma? Pointing out what is actually happening to such a one and the effect he is having on others has little chance of breaking through.

But do we put the question aside because of that? Experience will tell one that when the Dhamma is taught correctly, it sticks. It penetrates through to the heart and remains. It may not show up in behavior change immediately, but sooner or later it will trigger search-the-truth and trial-and-error and evaluation and trust and calm and impassivity and serenity and detachment and liberation and knowledge and vision of liberation. The Buddha does not get upset when his students do not immediately understand. So compassion would dictate some attempt to deal with the question. Modern psychology would say a person of such a sort was 'crying out for help.' Do you make no effort?

As to the question, it is easily answered, not so easily put into practice. One who knows and sees Dhamma should, if there is a teaching opportunity, teach those who do not know and see Dhamma if there is any possibility that the person or persons can be brought from the dark to the light. Even if it means going to a lot of trouble and unpleasantness.

Some links to further study of this issue:

3
Was the prohibition on eating dinner health advice?
2
Computers and Buddhist monks, offering computer to monk makes bad karma to both monk and donor?
4
Why aren't more people interested in Dhamma?
0
What are the points against social engagement?
3
Permission to ordain from absent father
0
How do monks live with medical conditions that require regular meals?
1
Do any modern (“free-thinking”) monks or monastic orders discard elements of the Vinaya?
1
how to respect older/elderly people who are conceited and demand respect because of age?