The Yodhajiva Sutta tells the story of a warrior who thought that brave warriors who fought valiantly and died heroically on the battlefield, would go to warrior heavan. The Buddha disappointed him by saying:

What about judges who carry out their judicial duties correctly and pass the death sentence according to the law?

Would these judges suffer the same fate as the warriors above, or not? And why?

Yes, and it's good to compare it to that quoted story, as many think that for a "higher, nobler" aim, doing wrong is ok. Or out of duties, like moderators and "responsible" often think.

Not only doing by oneself, but also order by words or sign and mental approve (which is the heaviest) are the doors of action (kamma).

Not even the judge, but also those who install such as death sentence inlaws, order death sentence, or mental agree face the results of the kamma of killing. So one should be careful also when voting or watch news of "bad-mens-hunts".

Always good to address here is the Dhanañjani Sutta in regard of duties.

"No, master Sariputta. Even right while he was wailing, they'd cast him into hell."

Ordering death is no right livelihood, spoken in regard of the main question.

"But": There is nothing total wrong which the work as judge, althought surely not very conductive for the practice. Remember the devoted King who gave up judging and passed it to his servants, having faced than "noble" people are capable to lie for sensual pleasure.

The work as someone who orders the physical harm or even depriving from life, or depriving of own, is of cause wrong livelihood, at least at the moment he makes use of the power for such. So it might depend much on the law he has to execute itself as well.

Same as doing soldier is not perse wrong, but only if not firm abstaining from killing.

(Note, not given for trade, exchange, stacks and notorious doubter by for those after firm stand upwardly and toward liberation)

Judging presents a tremendous burden of responsibility. Witness the following very sad judgment from AN4.111:

“Sir, what do you do with a person in training who doesn’t follow these forms of training?”

“Sir, it’s not appropriate for the Buddha to kill living creatures. And yet you say you kill them.”

Note that the killing is indirect by non-support. Yet one reads finality in this judgement as well as a deep sadness that there are no skillful means for helping those with no wish to be helped.

Judges uphold and are constrained by the laws of society. As citizens, we can advocate for laws that support the common good with the least harm. Whether we exile, imprison for life or execute those who maliciously and grievously violate society's laws is a shared responsibility.

There are many suttas where the Buddha speaks as matter of fact about Kings executing criminals. 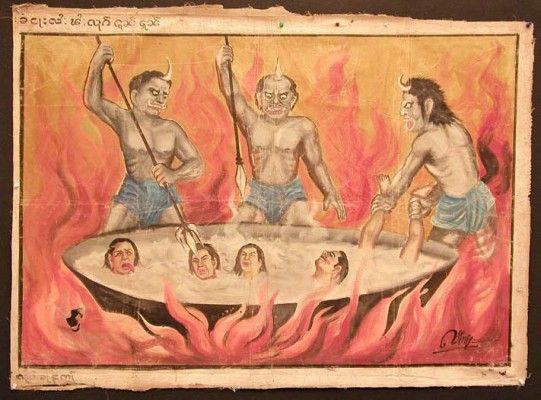 7
Can lay people be involved in the weapons business?
1
Will I keep my memories and experience with each passing incarnation?
5
What is Death? What did Buddha say regarding the experience of Death?
2
What is the term for not believing in cause and effect after death?
3
Jobs indirectly related to the meat business
2
Why don't some buddhists believe in karma and rebirth?
2
Morally unwholesome deeds knowing the consequences but without unwholesome intentions
0
Who judges Karma?
4
Can someone be literally reborn in lower realms due to unskillful thoughts and emotions?