I was reading this answer, in which an essay is cited. In this essay, Freedom From Fear, an example is given of a hunted deer which experiences anger, and thus aversion. In contrast, the desire to escape isn't aversion, but considered potentially skillful.

I have always thought aversion involves aversive states such as avoidance from painful experiences.

In sum, I wonder what the nature of aversion actually entails and encompasses.

Both fear and disliking are unskillful as they are forms of aversion. However there is a mental state which appears as fear or disliking, but it is a form of wisdom that understands the danger of something.

Ex: if you have the knowledge that a hot iron will burn your hand if touched directly, you are not going to touch it directly. But you do not have a fear or a disliking towards hot iron. The driving force there is wisdom. This is indeed skillful.

Like desire (and aversion is just the other side of the same issue=tanha & avijja), aversion is required for the path. The matter is just for what desire, for what aversion. Nyom has a lot of aversion to listen, since this question was similar raised some times ago...

What, if I hold on, will be for may long term benefit...? and vici versa. As long as not asking serious such and listen, there will be steady aversion toward useful for long term happiness.

Does Nyom see the fool behind, the nature of aversion (and greed)? The "not-knower"? 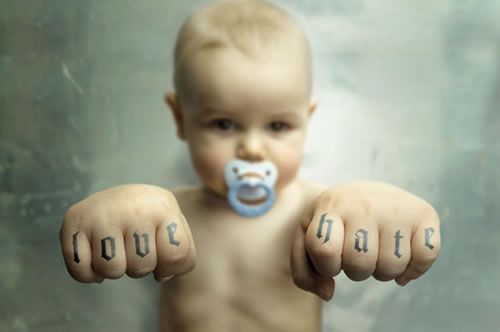 Truly, friends, for the arising of greed these two are the cause. Which two? An agreeable object and unwise (conceit) thinking.

Truly, friends, for the arising of aversion these two are the cause. Which two? An disagreeable (or fading of agreeable)1 object and unwise (conceit) thinking.

No, desire and aversion should both be understood in an abstract sense, sort of like the magnet's attract and repel forces.

Aversion includes avoidance as well as an overall negative attitude towards something.

Of course, as Samana Johan correctly said, aversion is just the other side of attraction (or attachment. Again, understood abstractly). We usually avoid something because we're attached to its opposite. Something like that.

In Mahayana, the nature of aversion (as well as desire) is understood to be reification or ignorant generalization. We feel aversion to the lump, once it is analyzed into its underlying causes and processes and we understand why it looks/works that way, in that frame of reference the aversion is gone.

There's some doctrine about the three poisons, which is quite neat: i.e. desire on the one hand, aversion on the other -- a pleasant symmetry.

(I think these two, might be the two 'mice' in the zen story of the tiger and the strawberry).

I wouldn't be surprised if "the three poisons" feature in the Pali canon, even so I think that in the suttas "aversion" maybe takes a back seat compared to "desire" -- i.e. it's not a big part of the doctrine -- the suttas mostly talk about desire (and ignorance, wrong view, conceit, and so on) as the problem, rather than aversion.

Also I think people don't agree on exactly what vibhava-taṇhā means -- but if "aversion" is in the four noble truths, it's not there explicitly or literally so I guess it's either implicit in dukkha or implicit in vibhava-taṇhā (and I think it's the latter).

My guess, my personal impression, is that maybe doctrines abut "aversion" were more fully developed in later forms of Buddhism, and the suttas found it sufficient to teach about desire and so on (except to teach a "middle way" doctrine instead of asceticism -- and, separately i.e. in the vinaya, a lot of discipline!).

Note there are several Pali words for desire or greed (i.e. tanha and raga which are invariably bad, and chanda which might be a desire for something wholesome). Anyway all three of these words appear in e.g. this abbreviated glossary, but dosa (i.e. "aversion") isn't there.

I think the way to understand it is that if raga is a desire to keep, to increase, to continue (an experience), then dosa is the opposite in the sense that it's a desire to be rid of, to decrease, to end.

It's negative (advesha or adosa) seems to be defined as "non-aggression":

Advesha (Sanskrit; Pali: adosa; Tibetan Wylie: zhes sdang med pa) is a Buddhist term translated as "non-aggression" or "non-hatred". It is defined as the absence of an aggressive attitude towards someone or something that causes pain. It is one of the mental factors within the Abhidharma teachings.

What is advesha? It is the absence of the intention to harm sentient beings, to quarrel with frustrating situations, and to inflict suffering on those who are the cause of frustration. It functions as a basis for not getting involved with unwholesome behavior.

I think my definition (i.e. wanting an unpleasant experience to end) fits with this kind of observation.

The answers to the other topic tagged aversion -- i.e. Aversion and Mahayana -- suggest other aspects to aversion, for example:

The nature of aversion is the hidden energy that lives in human's subconscious mind. There are some low-frequency energies, tendencies, desires in each human's subconscious mind that causes aversion, stress, unhappiness, anger, fear, restlessness, boredom and even the desire for sensuality. The root of these emotions, feelings and desires are not seperate from the human history(and pre-human lifes). If you look to the human history you can at least have intellectual understanding of the nature of the human emotions and why they have such negative effect on most of the humans lifes. That's why most of the humans life can be easily described as "unhappy life" and the human civlisation/human created world is just the expression of this tendencies of the humans.

The only way to become free from this suffering cycle is to realize Nibbana/attain stream entry. Then gradually with the repeated entering to Nibbana, a person would more and more clearly see the root of aversion and it's root energies. And one day the root energies of aversion etc.(in the core of the subconscious mind) would start to dissolve by itself, and as the root energies of aversion diminishes, the person would enter to deep peace and calm more deeply and frequently and eventually the person would reach to a point where s/he would have permanent happiness and peace. Then occasional desires and irritations would not have any serious effect in one's life.

Until this becomes a person's reality, aversion and all kinds of negative states would continue to effect a person seriously. A meditator can become free from serious aversion and can have deep peace for few hours, days, weeks and in some rare occasions months but these states are destined to end. It is not possible to become fre from these energies until a person solves the core of the problem-which happens in a high spiritual stage. So it is better to not try to get rid of these negative states or try to escape them but to be mindful of them as much as possible.

Here is an explanation of a great mindfulness method that can take a person to Nibbana in a very short period of time that would eventually completely solve the problem of serious aversion, unhappiness and desires:

How Mindfulness Creates Understanding (The Buddhist TV) by Yuttadhammo Bhikkhu

3
Is Mindfulness the Opposite of Multitasking?
3
Aversion and Mahayana
1
Which sutras are most directly relevant to the virtue of courage?

3
Aversion and Mahayana
3
How do I deal with Aversion?
4
How to practise without having aversion towards life?
2
Do ALL thoughts with lobha (craving), dosa (aversion) and moha (ignorance) create bad karma?