Possible for "Hungry Ghosts" to gain path? Possible to help them out?

Or is providing food, in the case they had done merits before, all what one could do for them in their state?

For context and understanding, see also: Escape possible for internets “hungry ghost”? and What are the hungry ghosts or hungry shades really?

In the traditional presentation, pretta (hungry ghosts or shadows) are stuck in a (subjective) world where everything is fake, particularly food - including the metaphorical food of love - but also anything of value: gold, gems, everything. Even friendship is fake. Even Dharma is fake.

They see something that looks like it might be real, and being extremely under-nutritioned, they run and eagerly jump on that promissing source of happiness - but alas, as everything else in their world it turns out to be fake.

What's interesting about a pretta state, in their world they have the same sun, same moon, same rain etc. as we have. However, because of their distorted perception, the sun does not warm them, the moon rays burn them, and the rainwater appears as pee.

It is said that the predominant emotions of prettas are those of frustration and disgust, with regular swings of momentary hope and bitter disenchantment mixed in. Because they are ever energy-hungry, they're constantly looking for something, anything (they don't know what), they see something that gives them hope, but when they come closer it looks as fake as everything else.

It is said, that in order to help hungry ghosts, Buddha must lure them with metaphorical gems, lure them with something shiny and valuable. So when Buddha descents to pretta worlds, he wears his best clothes, carries along a very rich entourage, and in general creates a rather strong impression. The goal is to give them confidence in the Buddha (and by extension Dharma) by being rich, happy, satisfied, strong, and stable.

When presenting Dharma to prettas, Buddha emphasizes that Dharma is the only reliable, infallible, invariably true teaching, and the only real, satisfying, nutritious, healthy food.

Prettas crave something real to rely on, so the way to lure them out of their misery is to give them something firm they can hold on to, something that works - but also something that will keep them busy for a long time, so they don't get tired of it and switch back to seeking new food.

Which is why when going to pretta world and teaching prettas, Buddha emphasizes gradual step-by-step practice. Every step must be directly verifiable and practice must have visible outcome, so students have a sense of progress. This sense of progress and pride then becomes their food that finally gives real nutrition.

For example, the first step for pretta may be a vow to not kill dragons. Of course, there are no dragons in the pretta world, so they can't kill them - but by taking this vow and feeling good about successfully keeping it, they start the good cycle. Small wins like this are the kind of steps that provide energy to move in the right direction.

In the paintings of Dependent Origination, the Buddha:

Therefore, it appears the Mahayana Tibetans suggest hungry ghosts should practise generosity; to transform their lust for receiving love into the joy of giving love. I have noticed the hungry ghosts I know gain joy when they give me a gift. Hungry ghosts need to connect with other people so giving wholesome gifts & helpful acts (rather than engaging in desperate impulsive casual sex and group drug taking) is a healthy way for hungry ghosts to gain some happiness.

Note: Hungry ghosts should not give gifts of sexual favours to Tibetan lama gurus. This is not wholesome and will lead to more rebirth in hell. 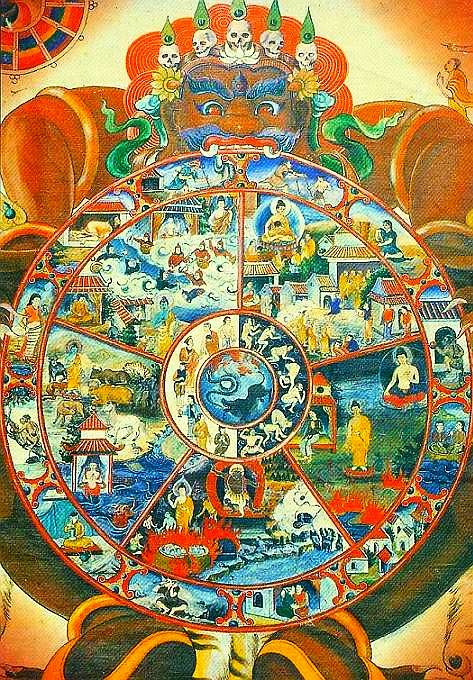 OP: Is it possible for states/beings of that of hungry ghosts to gain path?

In Piyankara Sutta (SN 10.6) it has mentioned that Piyankara Mata tell her son that they should abide by precepts to quit from that suffering birth. Even this sutta is categorized under Yakkha Samyutta, it's said that Piyankara Mata is a vimána peta (hungry ghost). The noble eight-fold path is three-folded as moral virtue (sīla), concentration (samādhi), and wisdom (paññā). According to the above sutta, we can say hungry ghosts can at-least follow few steps of noble eight-fold path under the moral virtue category.

OP: Is it possible to help them? Or is providing food, in the case they had done merits before, all what one could do for them in their state?

According to my understanding, only Paradattūpajīvī hungry ghosts can observe transferred merits (Pattānumodanā) by others and have a better status within their realm. So we should transfer our merits (Pattidāna) for their well-being.

Not the answer you're looking for? Browse other questions tagged dana or ask your own question.

4
How to propery pay back goodness and develop gratitude?
4
are mundane acts of compassion meaningful?