Does Viññāṇa generate Nāmarūpa in the sense that would make "uploading concsciousness" impossible?

Does Viññāṇa generate Nāmarūpa in the sense that would make "uploading concsciousness" to a computer impossible?

I was reading this question on philosophy.stack

I'd suspect that it's impossible to make sense of momentary rebirth / causal continuity in terms of computer data. Wouldn't every Buddhist say that pots and trees are mental constructions, so that, even if granted concrete reality, as in the Sarvastavadin school, they don't exist from moment to moment? A chariot's axle, for them, does not generate visual consciousness, only colour and shape do that. And so the same for computers.

But should the Buddhist claim it's not merely opaque but impossible, especially due to mind-body dualism? Does rebirth consciousness actually form the new body (and mind), in the 12 links of dependent origination? Because if it does, unless I've misunderstood 'consciousness', perhaps due to its coupling with 'rebirth', I don't see how anyone can claim that there is genuine continuity.

As surely my consciousness does not form the physical body of a computer: it's already been designed etc..

I don't understand the question. I just try to help. I write this answer by my guess the question's meaning.

The past (vanished) moment does not "upload" anything to the moment which it affects. It just causes its effect to arise. However, the effects are able to arise as the same habit, e.g. same object and same feeling, because of Upanissaya Paccaya.

The vanished moment is hypochondria. It cannot pass or upload anything to the future, although it still is able to cause new moment effects.

For example, I can smile when I thinking of my dead sister however she vanished and doesn't upload anything to me, she just causes me to smile. 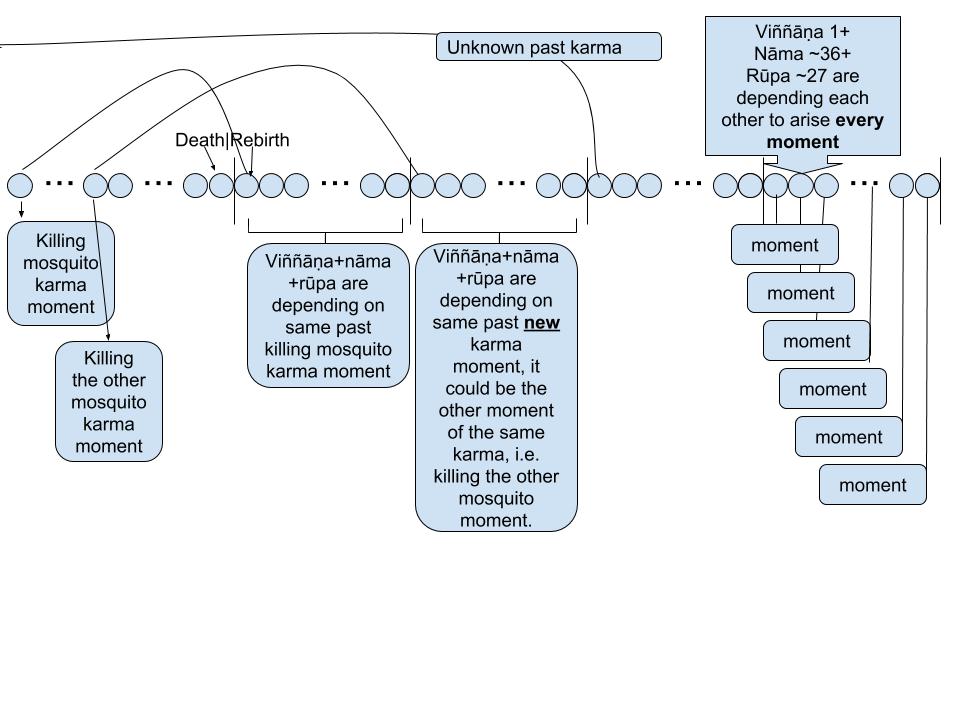 OP: Does Viññāṇa generate Nāmarūpa in the sense that would make "uploading concsciousness" impossible?

Yes, as mentioned in dependent origination Viññāṇa (consciousness) is the main cause for Nāmarūpa (name and form) to be arisen. (Note: there are many causes other than Viññāṇa which help Nāmarūpa to be arisen. Viññāṇa is also be the cause in different ways/conditions. So each of these can be considered as a different cause.)

Yes, it's impossible to upload consciousness into a computer. How could we make something to arise in an entirely different environment (without all the required conditions) which it supposed to be.

OP: Wouldn't every Buddhist say that pots and trees are mental constructions, so that, even if granted concrete reality, as in the Sarvastavadin school, they don't exist from moment to moment?

Sarvastivadins have a different idea on this. They believe all exists (sarvām asti) and holds the idea every dhamma exist independent of time (past, present, and future). Suppose you cut down a tree and made a table out of it. According to Sarvastivadins both tree and table exist.

OP: But should the Buddhist claim it's not merely opaque but impossible, especially due to mind-body dualism?

I have already discussed this in the answer to your first question.

OP: Does rebirth consciousness actually form the new body (and mind), in the 12 links of dependent origination?

Yes, according to Abhidhamma, the re-linking consciousness causes name and form at the reappearing in the following way.

Re-linking consciousness be the cause for vattu-rupa with 9 conditions.

Re-linking consciousness be the cause for remaining rupa-kalapa (bundles of form) present at the reappearing moment with 8 conditions.

If using the word "knowing", "recognize", classical words for vi (seeing) - ñāṇa (knowing), "knowing by sense", its possible all easier. Close the eye and open it. New "body", kaya, rūpa?

Maybe Why beings take birth, even in most worse existences and circumstances? is of help to understand inclination to food of what viññāṇaṃ is one sort.

1
...or does it mean that the conditions might also dependant on a or all things?
1
Sacca-pabba Is the reason that commentary commented "Viññāṇa is Jāti and Paṭisandhi," right?
1
Does it matter if the mind is neurologically originated or not?
1
Does it make sense to talk about origin of self?