No compassion, goodwill for oneself?

Possible to have real compassion or/and goodwill, not to speak about mudita and upekkha, without having one self floated with it.

So is this true or the very base not traced? Possible Nihilist-Trap? Possible that certain Kings at Buddhas times have been wiser and more compassionate as intellectuals may ever be? Possible not seen the qualities of Ariyasāvakas and thought in common terms?

[Note: this question is one of compassion and not thought for trade, exchange, stackes, Buddh-ism, or whatever binds to the low.]

The metta sutta was probably addressed to monks because the stanza opens with already being established in the noble eightfold path, as follows:

This is what should be done By one who is skilled in goodness, And who knows the path of peace: Let them be able and upright, Straightforward and gentle in speech, Humble and not conceited, Contented and easily satisfied, Unburdened with duties and frugal in their ways. Peaceful and calm and wise and skillful, Not proud or demanding in nature. Let them not do the slightest thing That the wise would later reprove. Wishing: In gladness and in safety, May all beings be at ease.

Also, the Buddha indeed mentioned to care first for oneself and then for others. This is not egoism, but intelligent self-care. The dhammapada states:

One should first establish oneself in what is proper; then only one should teach others. A wise man should not incur reproach.

For the sake of another's benefit, however great it may be, do not neglect one's own (moral) benefit. Clearly perceiving one's own benefit one should make every effort to attain it.

Also, the Buddha was a proponent of flexibility in his approach. You might know this as conventional language (to lay people) and absolute (to monks). The teachings on both addressee vary. Sometimes, the Buddha remained even silent because it was not connected to the goal, i.e., reduce suffering (& Nibbana).

Take for example MN 20 or Capala Sutta AN 7.58. In both suttas Buddha gave a number of strategies that can be employed. The idea is to be flexible and to see what works in any given time. 'Sometimes this works, sometimes it doesn't'. 'If it doesn't, let me use this instead'.

I would agree with others who say that it is often taken for granted in the Suttas that one is already dear to oneself. The lesson the Buddha adds is that we should extend this regard to others. When one regards others' lives as significant as one's own, this extension becomes natural.

Searching all directions with your awareness, you find no one dearer than yourself. In the same way, others are thickly dear to themselves. So you shouldn't hurt others if you love yourself.

Samma sankappa, thought of renunciation, and samadhi is compassion and goodwill for oneself. It is how you behave when you are alone, so according to people who translate sila as morality, that's not sila (but it is indeed sila). For other people, you have thought of non-arming, thought of amity, metta, mudita and so on.

There's a modern metta gatha which is discussed here and which begins ...

May I be free from enmity and danger

... so I think that's considered normal these days.

I think I read that the rationale is that you should call to mind metta for yourself or your own friends and family -- i.e. people you can easily feel metta towards -- before trying to apply it to people you don't know, and/or to people you feel emnity towards.

Perhaps this strategy is incompatible with trying to practice anatta but I'm not sure that everyone tries to do that anyway -- but see also Metta meditation ever taught to householders?

All tremble at violence; all fear death. Putting oneself in the place of another, one should not kill nor cause another to kill.

That seems to assume that people will inherently refrain from being hurting themselves.

Still I'm not sure metta is really applicable to oneself: partly, because I don't see how that doesn't encourage self-view and clinging; partly, because I suppose that might result in over-indulgence (i.e. accepting your own faults instead of making an effort to correct them), though you might counterargue that true metta would involve properly following the path; and partly, because of think of metta (brahmaviharas generally) as primarily social:

They provide, in fact, the answer to all situations arising from social contact

For example the article -- The Six Stages of Metta-Bhavana -- references the Visuddhimagga (Chapter 9) as its source, and includes ...

... or another source says six stages:

You might see the Visuddhimagga for more detailed advice -- it is quite detailed (15 pages) and begins something like this:

Here is what it says after that, about developing it towards oneself: 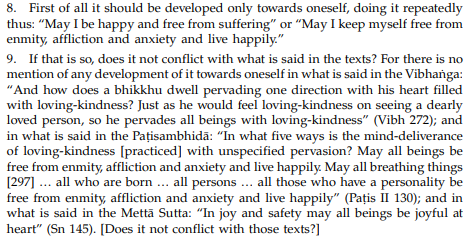 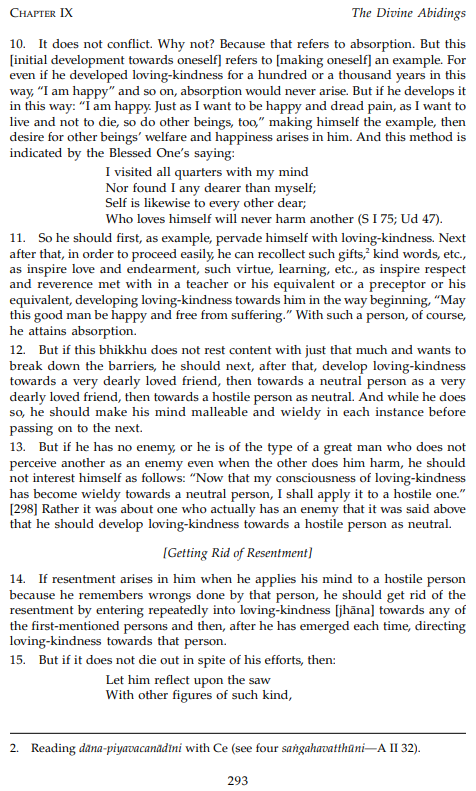 (this was quoting The Path of Purification translated by Bhikkhu Nanamoli, from the Buddhist Publication Society).

What is said there is when you practice loving kindness, you should NOT say "May I be" or "May my so and so be" because in those cases you are putting your self before others.

Buddha never says "May I be well, etc." instead Buddha says in any discourse when he is talking about loving kindness (metta) he says to practice as "May all beings be...".

However, that does not mean disparage yourself.

On one hand it means boundless - no boundary around me or my ones. For example, if you put yourself or your child first, what happens to the loving kindness when a deadly snake is about to bite you or your child? Will you kill the snake?

Even more importantly, when you say "May I be...", you are feeding the identity view (sakkayaditti). Every discourse of the Buddha is a path to Nibbana. Good example is metta-sutta in Suttanipata. To attain Nibbana you need to remove identity-view. Therefore the practice of loving kindness that Buddha teaches will not say "May I be...".

Thanks to this great teacher and explanation of Loving kindness meditation, I too got to learn about this.

Upasaka SarathW came across a wonderful sample on Buddhas answer to this question in a Sutta, shared here: Is it possible a person mortifies others but not mortify themselves and vice versa?

May all be able to rejoice with his merits and gain with it!

In this excerpt of the Cakkavatti Sutta DN26 the Buddha makes the following statement about a monk's wealth.

And what constitutes a monk's wealth? There is the case where a monk keeps pervading the first direction [the east] — as well as the second direction, the third, & the fourth — with an awareness imbued with good will. Thus he keeps pervading above, below, & all around, everywhere & in every respect the all-encompassing world with an awareness imbued with good will: abundant, expansive, immeasurable, free from hostility, free from ill will.

The key phrase that that I believe answers your question is "above, below, & all around, everywhere & in every respect the all-encompassing world". This statement makes it clear that he is talking about the whole entire world, not any particular slice or subdivision. Our bodies and our minds are as part of the world as anyone else, the idea that anyone could be separate from the world in any way is a fabrication.

Not the answer you're looking for? Browse other questions tagged brahmavihara or ask your own question.

3
Can someone help me to find suttas on Self compassion
2
Metta meditation ever taught to householders?
1
Is Chant of Metta from Tipitaka?

9
What is the difference between 'compassion' and 'pity'?
1
Understanding compassion fatigue from a buddhist point of view