Need to know more about this art

This was a birthday gift I received a couple of weeks ago. I'm trying to figure out where it came from, what the images mean, and about how old it is. It's at least a hundred years old. 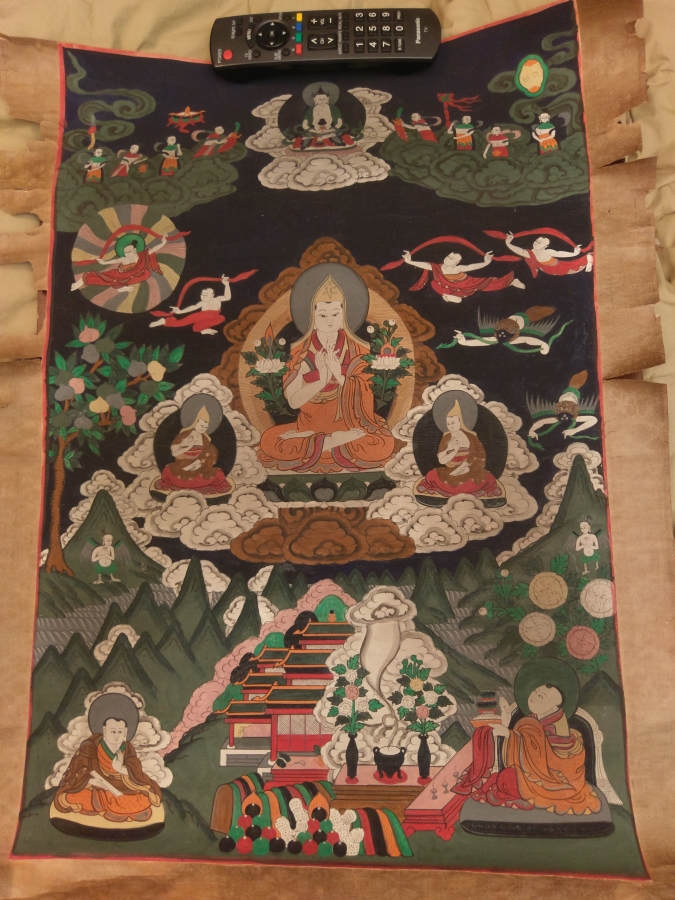 This is most likely a Tibetan Thanka which depicts 3 "levels". Based on the depictions, it's probably Vajrayana, specifically Gelug-pa, lit. "yellow hats" - this is the Tibetan Buddhist branch to which the Dalai Lama belongs.

The top level depicts the Buddha surrounded by females, most likely Dakini.

The central level depicts 3 people with a very recognizable yellow hat, so probably they are Tulku, possibly the Dalai Lama in the center, the Panchen Lama and the Samding Dorje Pagmo or Karmapa. They are depicted as slightly above the world since they are considered reincarnations of Bodhisattva

The building in the bottom section could be a depiction of the Potala.

The two figures depicted in the bottom section are most likely high monks, but I can't think of any specific persons or roles for these.

The many occurences of Green, Red, Blue, Yellow and White refer to Pancha-Varna

As for the age of the painting, it's very difficult to tell, as iconography in Tibetan Buddhist art has changed very little in the last few hundred years.

You might enjoy this video on decoding symbolism in Thanka

8
Theravada Buddhism and Art
2
Examples of early Buddhist art
12
Buddhist view on Art and being an Artist
5
Why is an emaciated Buddha rarely represented in art?
2
Seeking explanation of this image's iconography
2
Why is there Hindu gods in this decorated wall in the Vihara of Bhaja
2
What is this picture?
1
Possible to attain happiness without support, through art?
0
Street art interpretation in predominantly Buddhist country