Nagarjuna and the Schools

I am confused by the variety of views within Buddhism. It appears to me that Nagarjuna provides a complete philosophical justification and explanation for the Buddha's teachings and that this is accepted by many Buddhists. But not all. I'd like to ask:

There are three issues here: there is N's proof of the absurdity of all positive metaphysical positions (in Fundamental Wisdom); his 'theory of Emptiness'; the doctrine of 'Two Truths'.

I can tell you why the Theravada school does not pay attention to Nagarjuna's works:

Basically, this means that from the perspective of the Theravada school, everything that the Buddha had taught in the Pali Canon is sufficient. Nothing more is needed. Anything else is simply icing on the cake.

One important contribution of Nagarjuna is the use of methodical philosophical analysis to defend Buddhism against attacks by Hindu and other non-Buddhist Indian philosophers. See this answer.

I don't have the scholarship to give you a survey of several schools -- perhaps someone else will.

The way I see it is that schools will have a "canon". I think that's a bit a analogous to the "curriculum" of a school -- and different schools have different curricula ... almost by definition -- and therefore (i.e. to that extent) your question and/or my answer to it might be just trivial, or unsatisfying.

Or it may "beg the question" i.e. whether there even are different schools of sects of Buddhism, e.g.,

Now just consider the Pali canon, for example -- I thinks that's "the canon" for many Buddhists.

Trivially if something is in the canon then it's canonical, and if it's not it's not.

Which sects or schools reject Nagarjuna's metaphysics? On what grounds do they do so?

I don't know that they even know or care?

I don't know if this is a good analogy, but ... "How can there be people who haven't thoroughly studied Einstein's theories of relativity? How do they even explain the gravitational lensing of light, without it?" -- someone asking these questions might think that Einstein's theories are utterly fundamental to understanding the nature of the universe we live in -- for other people ("normal people", if you'll excuse my putting it that way) that's completely missing the point, quite irrelevant, nothing to even think about.

How do they deal with the difficulty that Nagarjuna proves all theories of Reality except his own are logically indefensible?

Quite. Well I suppose that Buddhism isn't necessarily "metaphysics". I think I inferred from this comment of yours that you see Taoism too as metaphysics (or what you call a "(perennial) philosophy") -- I don't know, maybe it's something else: practical, a science ... a history, a narrative (see also e.g. "is medicine a 'science', or an 'art'?") ... whereas "metaphysics" are even less relevant, more of a niche interest, than "physics" (if you'll forgive my saying so, that's me having studied physics but not formal philosophy).

Maybe the suttas aren't trying to be "logically defensible" -- they're trying to be "helpful descriptions" ... for people who have "ears to hear", and "little dust in their eyes".

I get from the suttas that the Buddha (and, following his example, some Buddhists) might treat that or any other kind of question as false dichotomy -- e.g., "Q: Is it this or that, or both, or neither? A: none of the above, or no answer."

Questions like, I don't know, "Are things empty or not? Are two truths, or only one, or none?" are just -- might be (at the risk of sounding rude) be called -- examples of papanca.

I mean, after you have studied -- and if you study -- Nagarjuna, then you may understand what he's saying ... and why he's saying it i.e. why it's helpful or beneficial, useful, practical, worthwhile.

Maybe you should know, though, that lots of people simply haven't (studied N that well) and don't (understand what good about it and exactly what he's saying).

If you try to make comments (brief remarks or answers), which presume that people have read N and that they understand it in the same way that you do, then your comments may be misunderstood, or baffling -- see e.g. here,

I guess another example might be the Zen story, titled Nothing exists ... an example of the doctrine being -- variously, I guess, depending on I interpret that story -- hard to fathom, shallowly repeated, easy to misunderstand, or missing the point entirely.

Addition to post: I just read the comment below in answer, which is the opposite of Pali Buddhism:

I prostrate to the Perfect Buddha, the best of teachers, who taught that whatever is dependently arisen is unceasing, unborn, unannihilated, not permanent, not coming, not going, without distinction, without identity, and free from conceptual construction. 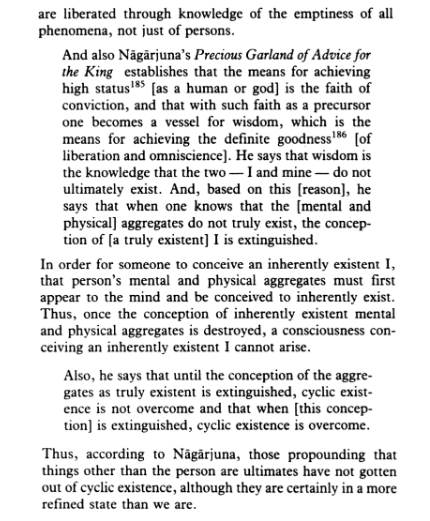 36
If a buddhist should not kill a mouse living in their home, what justification do they have to rid themselves of a parasite such tapeworms
17
Why isn't there a Buddhist Bible?
16
Have any Buddhist thinkers responded to the critique of the Brahma Sutras?
5
Can you criticise or improve Ven. Bodhi's description of Mahayana
1
Why are these called "The All"?
4
Linking Madhyamaka emptiness to Theravada emptiness through papanca
2
Similarities between Daoism and Buddhism
2
Is it wrong to buy a Buddha statue in Thailand from a Buddhist point of view?
0
Which (semi)secret societies influence Buddhism?

7
So many Buddhist schools!
5
What is the relevance of Pratityasamutpada in Nagarjunas system?
10
Which book by Nagarjuna provides an introduction to his teachings?
7
Buddhist logic and Nagarjuna
3
Which commentary on the MMK should be studied first?
2
Has anyone read Nagarjuna as claiming only that an effect is never its cause?
1
Theories and Doctrines
1
How did Arya Nagarjuna reached the direct perception of Emptiness?
3
Theravada and Nagarjuna
2
Sanskrit versus Pali and Nagarjuna