Why are exceptionally tall statues of the Buddha and Guanyin built?

When I read this article on the tallest statues in the world, I was struct by how many of them were of important Buddhist figures: of the fifteen tallest statues six are of Guanyin (Kannon/Avalokiteśvara), five of the Buddha, and one of Kṣitigarbha, for a total of twelve out of the top fifteen!

Why are such tall statues built? What significance does the height of these statues have in the religious lives of Buddhist adherents?

Or are these statues not built for true religious purposes, but as an unofficial competition between nations, just like they compete over the tallest skyscraper? Nine out of the fifteen were built in the 21th century. Who commissions these statues? Statues of this size would be beyond the budgets of most temples.

See also: this question on why precious metals are used for Buddhist statues.

Buddhism is older than some religions. This age difference takes it back to eras that people were not running the race that we were running today. That must have allowed them to create these magnificent creations.

There are mediation practices that you can follow when you are involved in a task like this (i.e. - Budhdhanussathi). Large number of people must have been involved in the creation of these statues. So, these statues can be the result of many devotees meditating.

Competition is not a Buddhist virtue. However, tireless effort is. These could be the result of many people challenging themselves in something that is viewed as 'impossible' by many. In that, these statues are a source of inspiration for many thousands in realizing that - 'nothing is impossible, so is Nirvana'.

Statues last long beyond that of a life, and a picture says a thousand words. Statues also tend to be respected enough to not be 'touched up' therefore insight can be passed on in a way beyond that of words while the represented meaning is difficult to distort.

The greater the statue symbolises the importance of the lesson that is to be passed on.

OP: Why are such tall statues built?

Why do people have statues for the Buddha?

From DN16, the Buddha explained to Ananda, why it is beneficial to have a stupa for a Tathagata (a Buddha):

Today, people in USA remember Martin Luther King, people in India remember Mahatma Gandhi and people in South Africa remember Nelson Mandela. They may have photos or statues of these revered persons put up in public places and treated in a respectable way. The statue of the Buddha is no different. They are there to serve as icons of inspiration.

The Buddha, at least from a Theravada perspective, is no more supernaturally reachable through prayers and rituals, than King, Gandhi or Mandela.

OP: What significance does the height of these statues have in the religious lives of Buddhist adherents?

Now, how was the stupa of a universal monarch or a Buddha built?

From the same sutta:

"But how, venerable Ananda, do they act respecting the body of a universal monarch?"

"And even, Vasetthas, as with the body of a universal monarch, so should it be done with the body of the Tathagata; and at a crossroads also a stupa should be raised for the Tathagata. And whoever shall bring to that place garlands or incense or sandalwood paste, or pay reverence, and whose mind becomes calm there — it will be to his well being and happiness for a long time."

So, the Buddha stupa was not a simple tomb. Rather, it was a very grand memorial shrine.

Similarly, I extrapolate that the purpose of the great height of the statues of the Buddha is to function as a grand memorial.

It's no different to the giant 38m tall statue of Christ the Redeemer in Rio de Janeiro or the giant statue of Abraham Lincoln at the Lincoln Memorial in Washington D.C.

Doesn't the giant 24m tall statue of the Buddha (the Great Buddha in Bodh Gaya, India) below make you think "this is the statue of that Blessed One, Arahant, Fully Enlightened One!" Doesn't it inspire you and fill you with awe?

Around 2.5km away from this statue, you can visit the Mahabodhi Temple and the Bodhi Tree, the exact location where the Buddha was said to have attained enlightenment. More places of inspiration.

The Great Buddha in meditation pose: 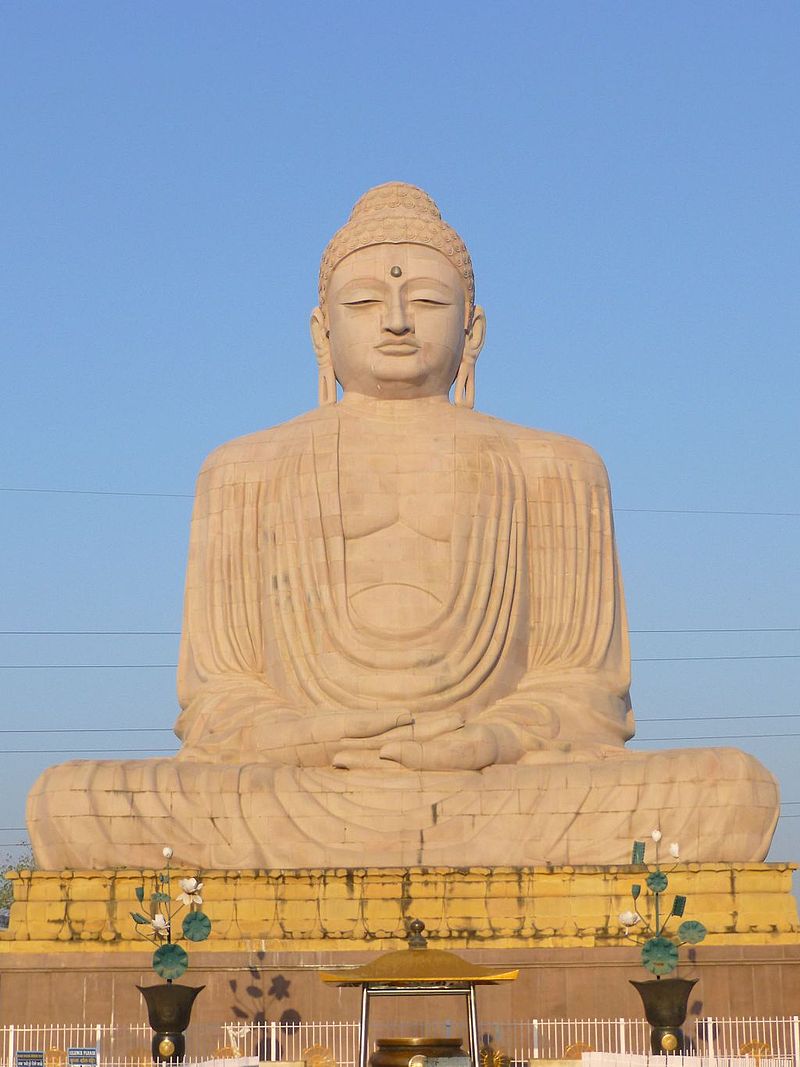 See "Many motives, many fruits" and others in Generosity,dana, caga - Path to freedom, if wishing freedom rather than seek issues to protest.

Very useful practice to overcome envy and stinginess is the practice of mudita.

As for objects of veneration and the benefits see Respect: Physical Objects

[Note: this tiny building of Dhamma is not thought for any commercial use, trade, stakes or exchange for wordily gains]

Not the answer you're looking for? Browse other questions tagged the-buddha statue avalokitesvara or ask your own question.

7
What is the reasoning for making a buddhist statue out of gold?

7
Why should we worship statues of Lord Buddha?
5
Should Buddhists use statues with an imagined likeness of the Buddha for veneration?
3
What are the "Qualities of the Buddha"?
5
What are the Eighteen Buddha Attributes?
10
Why are Buddhas always Indian, male and human?
2
Why the Buddha abandoned asceticism
5
Why are there are only one Buddha per universe?
2
Why Buddha rejected Upanishad and Veda?
0
Why wasn't the Buddha a solipsist?