In the Pali there are two terms, which are (generally) used contextually in two different ways:

What do these terms actually mean and what is the distinction between them? Importantly, how are these terms constructed or derived in Pali to differentiate their meaning?

Of note: the PTS dictionary makes the rather vague comment:

doubtful whether a legitimate form as upa + pad or a diaeretic form of uppajjati = ud + pad. In this case all passages ought to go under the latter. Trenckner however (Notes 77) defends upa˚ & considers in many cases upp˚ a substitution for upa. The diaeresis may be due to metre, as nearly all forms are found in poetry. The variant reading upp˚ is apparently frequent; but it is almost impossible to distinguish between upap˚ and upp˚ in the Sinhalese writing, and either the scribe or the reader may mistake one for the other

I think there are two rather different words confused here.

One is Sanskrit "utpada"/"anutpada" (to arise / not to arise) and its Pali corruption "uppada" with a past form "uppanna".

Another one is Sanskrit "upaprajati" (something like "offshoot" or "derivative" - meaning something that is born off a family but separate) and the Pali corruption of its past form, "upapanna".

Checking the examples of sutta usages in @ChrisW's answer, I think they all make sense.

'Upapajjati' is for the most part found in suttas about results of kamma. It was also mentioned how it is found in the Appassuta Sutta (AN 4.6) about "progression" in learning/study.

'Uppajjati' is found unrelated to results kamma, most commonly as:

Eye consciousness arises dependent on the eye and sights.

Interestingly both words are found in the one place in MN 148:

The arising and vanishing of the eye is evident,

That’s why it’s not tenable to claim that

the eye is self.

So the eye is not self

Piya Tan comments however appears to dispute the use of 'uppajjati' at 13:

I disagree with Piya Tan's dispute about "uppajjati" at 13 and agree with the answer of Guru Andrei Volkov, from which I have concluded "upapajjati" to mean: "follows" or "proceeds" or "progresses".

If anyone says, ‘the eye is self,’ that does not follow/proceed/conclude [from that statement].

Because of undertaking such deeds, when their body breaks up, after death, they follow on/proceed into a place of loss, a bad place, the underworld, hell.

Little learning but follow to/proceed to the point of learning.

While not the words of the Buddha, MN 72 below:

But Master Gotama, when a mendicant’s mind is freed like this, where do they proceed to/go to?

Well then, do they not proceed/not go anywhere?

Here, bhikkhus, I say there is no coming, no going, no staying, no deceasing, no uprising. Not fixed, not movable, it has no support. Just this is the end of suffering..

Throughout, Ñāṇānanda refers to the reading anuppanno. This is the mainline reading of the PTS edition, and is presumably supported by the Sinhala manuscripts. The Burmese texts have anupapanno. The difference is that, as I discussed in a previous post, upapanna always refers to rebirth, whereas uppanna has a more general meaning. Nevertheless, in this context it is clear that rebirth is the topic, so the difference is immaterial. The related passages I quote below support the reading upapanna so I use that.

That's compatible with AN 3.59 which uses uppanna for the arising of "knowledge":

In AN 8.29 uppanna is used for the arising of a Tathagata in the world, but (in the next paragraph) upapanna for a person having been reborn in hell:

Piya Tan (in his description of Appassuta Sutta (AN 4.6) translates uppanna as "progress" or "spiritual progress".

That would be ironic if true, because "spiritual progress" may imply the opposite of "rebirth" (ironic that the dictionary definition of both include "rebirth").

But I think it's not generally true i.e. that specific meaning (spiritual progress) is only applies what it's applied to in this sutta.

I'm confused too though, by this. Below is Piya's rendition of AN 4.6. Note that: 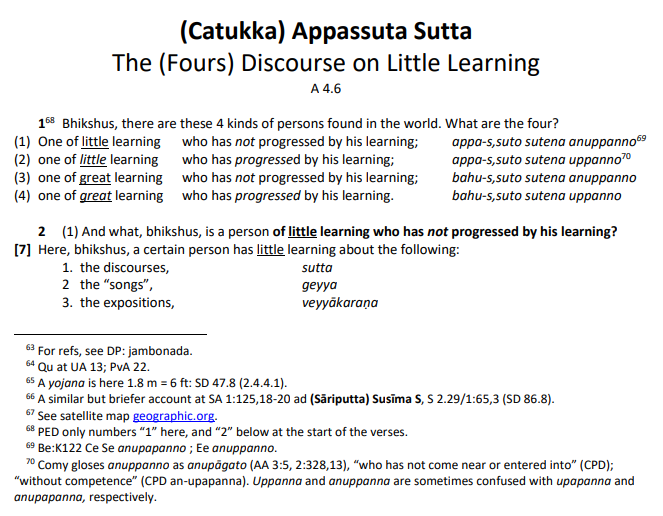 In contrast, below is Ven. Sujato's rendition of AN 4.6. Note:

What four? A person may have:
Katame cattāro?

I don't know anything about why there are different versions of the Pali, except that apparently there are. Maybe it's what Ven. Sujato was talking about in the first quote:

Ñāṇānanda refers to the reading anuppanno. This is the mainline reading of the PTS edition, and is presumably supported by the Sinhala manuscripts. The Burmese texts have anupapanno.

See also the quote appended to the OP:

Confusing! Maybe you can derive some kind of clue from other bits of this answer though.

The use of "upapajjati" in MN 72 is very interesting and appears not so straightforward.

Yes MN 72 seems to use both words.

The instances of upapajjati are translated "reborn". And assuming you agree with this comment ...

In addition, another shorting coming of your post is you spend time analysing a term "ditthigata" which is spoken by an outsider, as though its meaning is the same as held by the Buddha. Since the outsider is ignorant of Dhamma, one must be careful in imputing, as you did, that their meaning of a word is the same as the Buddha.

... you'll find it significant that it was "the outsider" who first used that word.

And at the end of MN 72 there's anuppādadhammā (I think that's the same word as uppajjati) applied to each of the five aggregates -- saying that because form etc. don't "arise" then there's no question of being "reborn".

And, to "discuss the construction of the Pali words" -- according to this dictionary:

Not the answer you're looking for? Browse other questions tagged pali-canon pali-language pali or ask your own question.