What is actually Nirvana -- what are some Tripitaka sources?

Most of this community people are from all around the world, and may have different teachers, and level of knowledge may vary.

A brief explanation, with reference to the Tripitaka, is much appreciated.

And, can someone please translate this: 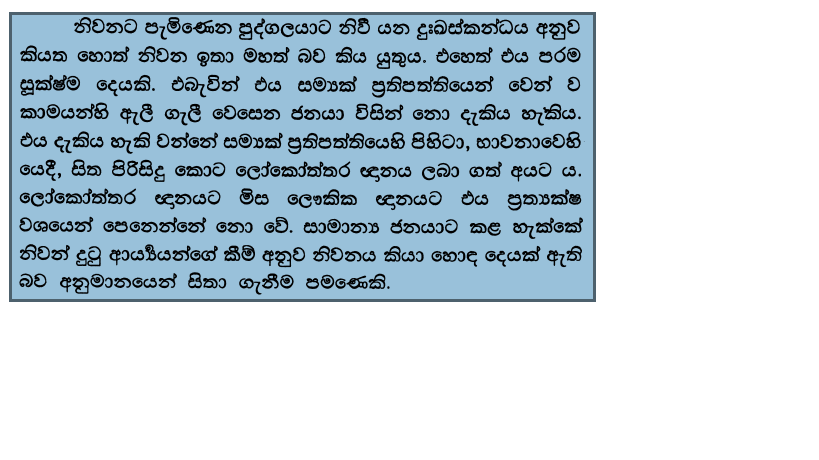 It's from the Abhidhamma Margaya ("Way of Abidhamma") by Ven. Rerukane Chandawimala Thero.

I associate it with cessation -- with the ending of dukkha, of craving -- outlined in the first three noble truths.

and that they’d live having attained the freedom of heart and freedom by wisdom where ego, possessiveness, and underlying tendency to conceit are no more.

“Ānanda, it’s when a mendicant thinks:

‘This is peaceful; this is sublime—that is, the stilling of all activities, the letting go of all attachments, the ending of craving, fading away, cessation, extinguishment.’

Perhaps there are people who think that this means ...

... and therefore something something something "atta" or real self which is neither the body nor signs. But I don't know (i.e. I don't know a reason to agree with a doctrine of atta like that) -- because I associate self-views and attachment (possessiveness) with dukkha -- e.g. "this is mine ... no, now I've lost it, that was mine, so now I'm unhappy" -- and therefore, cessation of that (nibbana) is necessarily without such "self" and "possessiveness" and so on. If nibbana is uncompounded I'm not sure why you'd want to add an atta concept to it, but "to each his own" I suppose (see also this paper on the subject of whether nibanna is anatta).

Incidentally my concept of nibbana wasn't formed by the sutta above, so don't read into it more than I have -- I'd never read it before, I just looked up a reference (to answer this question) and picked the first one (on this page) which didn't seem to contradict my preconception.

Given that nibbana is uncompounded I doubt it exists in relation to anything else ... but other things can co-exist with it, e.g. to the extent that the Buddha could co-exist with unenlightened beings ... it's not like another place, exactly, more like a different state of mind or something.

I just called it "a state of mind" except that maybe it's better described as a non-state -- e.g. not defiled, without hindrances (klesas).

I wondered about saying that "anything that's not nibbana is a hindrance" (as if nibbana were a pure substrate or element, and everything else were a hindrance or an obscuration on top of that), however, I'm not sure how compassion for example relates to nibbana.

I've also recently seen it described as a state of ethics.

Saying that it's without this, without that, only cessation, might make it seem austere or sound like death or something, but I should think that's obviously not the right view of it (see Bhagavā).

Apart from seeing it simply as a state of mind, I think there are other views of it -- but, the following seem to me complications that are maybe more trouble (confusion) than they're worth:

Sorry to disagree; I know that Ven. Bodhi must know more than I do, and that he's paraphrasing suttas, but I don't see that these additional explanations make it easier to understand:

Nibbana is not a conceptually constructed, ideological, 'thing'. It is described as the unconditioned element. As all concepts are conditioned by a mind, it cannot be reached by mental fermentation. It can be approximately described by negation - not impermanent, not unsatisfactory, not self (etc). But even that is still conceptualisation. Better meditate, attain jhana, and find out for yourself.

Here is a little Buddhist story about the Turtle and the Fish, which I think, nicely illustrates the confusion that arises when trying to understand Nibbana intellectually and not practically.

"There was once a turtle who lived in a lake with a group of fish. One day the turtle went for a walk on dry land. He was away from the lake for a few weeks. When he returned he met some of the fish. The fish asked him, "Mister turtle, hello! How are you? We have not seen you for a few weeks. Where have you been? The turtle said, "I was up on the land, I have been spending some time on dry land." The fish were a little puzzled and they said, "Up on dry land? What are you talking about? What is this dry land? Is it wet?" The turtle said "No, it is not," "Is it cool and refreshing?" "No, it is not", "Does it have waves and ripples?" "No, it does not have waves and ripples." "Can you swim in it?" "No you can't" So the fish said, "it is not wet, it is not cool, there are no waves, you can’t swim in it. So this dry land of yours must be completely non-existent, just an imaginary thing, nothing real at all." The turtle said that "Well, may be so" and he left the fish and went for another walk on dry land".

Copy/paste part of my answer to this question.

Jumping in with the definition of Nibbana from the (Theravada) Abhidhamma

In the Abhidhamma there are four ultimate realities: consciousness, mental factors, matter, and Nibbana.

The first three (nama and rupa) are conditioned, thus anicca, dukkha and anatta.

Nibbana isn't; it is unarisen and unconditioned.

Nibbana is termed supramundane, and is to be realized by the knowledge of the four paths. It becomes an object to the paths and fruits, and is called Nibbana because it is a departure from craving, which is an entanglement.

When an entity A is devoid of entity B, then it can be said that entity A is devoid of B, or empty of B. That is the voidness or emptiness or suñyāta. The Buddha said when the mind becomes empty of greed (rāga), hate (dōsa), and ignorance (mōha) it becomes empty of those defilements: “rāgakkhayō Nibbānan, dosakkhayaō Nibbānan, mohakkhayō Nibbānan“, and that mind has attained Nibbāna. There is a sutta in Tipitaka that is about sunnata (voidness / emptiness), called the Cula-Suññāta sutta

These impurities accumulated due t0 desire of lust, hate and delusion. The total eradication of impurities will bring tranquility and Nibbana. The cleaning of impurities is devided in to five main categories, as it cleanses in different levels. Through the understanding, dawns the wisdom to each of the segments, taking out different parts of impurities (ක්ලේශ ප්‍රහාණය).

To find out more on these above five points please refer to The Patisambhidamagga - "path of discrimination". page 357 / 359

In reflecting and meditating you begin to understand your thoughts, the way in which the thought process gets attached to desire. In contemplating on impermanence, one realizes the danger in been attached to desire. When understanding the value of letting go of the pleasurable desires, and attachments, and when this takes place, the impurities are subdued in these above said five ways.

There also are many aspects of nibbāna in Abhi. Kathāvatthu as well.

Nirvana is this moment seen directly. There is no where else than here. The only gate is now. The only doorway is your own body and mind. There’s nowhere to go. There’s nothing else to be. There’s no destination. It’s not something to aim for in the afterlife. It’s simply the quality of this moment.

Not the answer you're looking for? Browse other questions tagged theravada philosophy nirvana or ask your own question.

7
What is Nirvana (mahayana)?
0
Possibility of nothing but all-encompassing, absolute Nibbana without Samsara? If so, is sustainability possible (and how)?
-1
After attaining Nirvana will I remember that I was once without Nirvana?

4
How to calculate the number of years in a kalpa?
1
Does any Theravada Suttas / sources refer to Oozing orifices? What are the Suttas?
13
Are there pictures/paintings of Nirvana?
3
What are some ways to improve my practice?
5
Are there problems from mixing different sources of teachings?
7
What is Nirvana (mahayana)?
3
How do you reach Nirvana when you are craving Nirvana?
4
Sutta jhana vs. Visuddhimagga jhana
1
Dwelling Upon Seeming Levels of Emptiness?
0
Anatta and the question of motivation