Buddhadasa, his health failed him revealed he had no attainment in "Anapanasati", though written 550 pages on it. He was just a Bhikkhu-scholar groomed by Theosophical Society, his teaching contained poison.

Is there any evidence Buddhadasa was groomed by the Theosophical Society? Also, what evidence exists the health of Buddhadasa failed him to prevent Anapanasati? When he was in his final years, I saw he would sit very still crossed legged (although with back supported by chair) for up to 3 hours giving a talk. There was no visible evidence to most people in the audience he had physical discomfort (unlike the audience, who often sat in physical discomfort for at least 2 hours). In fact, at a time when it was said his passing was imminent, I saw him lose often consciousness when giving a (live translated) lecture when the translator would speak; then he would be woken up; and continue the talk exactly at the point he previously stopped. Most importantly, what errors did Buddhasasa make in his teachings about Anapanasati?

According to your question:

Buddhadasa's ānāpānassati is the translation version of paṭisambhidāmagga, visuddhimagga, and ānāpānassati's commentary. He copied all of them from the commentary.

About anapanasati, there are many modern teachers talking about this but I have only read Buddhadasa comment extensively on the key phrase found in the sutta, namely: "He trains himself".

The same as Buddhadasa, the suttas define the term "training" to refer to the Threefold Training, as follows: 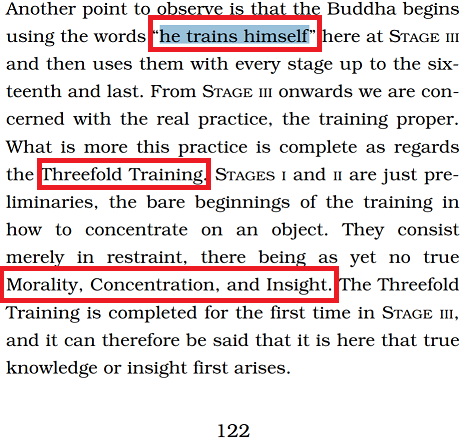 Related to the point above, the Buddha said he teaches about suffering & the cessation of suffering (MN 22). Suffering is created by the mind rather than by the body. Since the phrase: "He trains himself" must include insight into suffering & the ending of suffering, that is, the four noble truths, I have also only read Buddhadasa teach this from step 3, as follows: 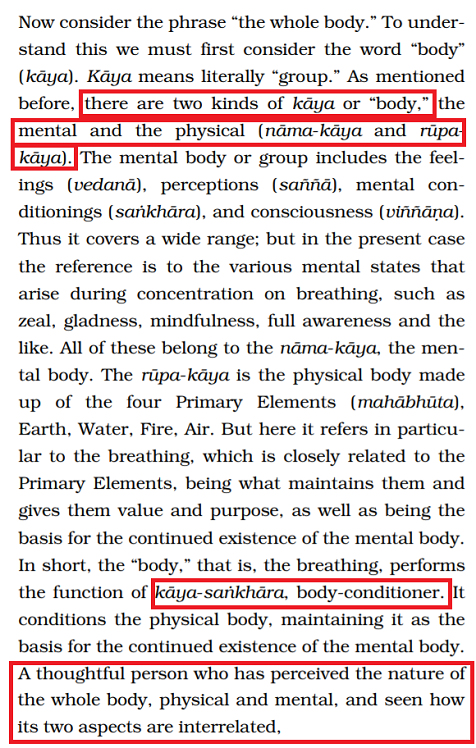 Below from his 550 pages is a 3rd point providing evidence to a hypothesis that Buddhadasa taught anapanasati correctly and every one else taught anapanasati incorrectly. I have never read the following explanation by any other teacher; yet the explanation below accords with the principles in the suttas about feeling & perception. 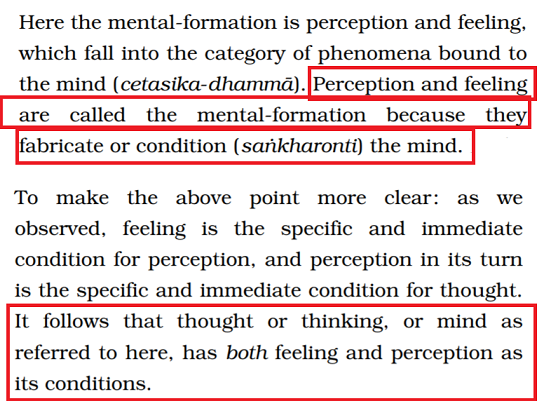 Buddhadasa explains this more clearly in his later work, below:

Now we come to step seven: "experiencing the mind­-conditioner (cittasankhara-patisamvedi)." If we have completed step six successfully, then we know all about the feelings of piti and sukha. What does the arising of piti do to the citta? What does the arising of sukha do to the citta? What kind of thoughts does piti condition? What kind of thoughts does sukha condition? We have noted and scrutinized these effects since steps five and six. Once we come to step seven, it is easy to realize that, "Oh, piti and sukha are mind-conditioners." These vedana are mind-conditioners in the same way that the breath is the body-conditioner. The method of study and observation is the same as in step three. (107)

We have observed that piti is coarse and excited, whereas sukha is fine and peaceful. Thus, when piti conditions or brews up a thought, the thought is coarse. On the other hand, when sukha brews up a thought, it is calm and tranquil. This is how we realize that the vedana condition thoughts. Then we realize that the feelings condition both coarse thoughts and subtle thoughts. We call this activity "conditioning the mind." (108)

When piti is strong, it causes trembling in the body. And if it is very strong the body might even dance or bounce with joy. This feel­ing is coarse and powerful. On the other hand, sukha is calming, soothing, and relaxing. We learn that their characteristics are very different. When piti dominates the mind, it is impossible to think subtle thoughts. We feel a tingling all over; it makes the hair stand up all over our bodies. So we need to be able to control piti. Sukha, however, has advantages. It leads to tranquil, refined states. It can cause subtle, profound, and refined thoughts. It is as if these two feelings are opponents or foes. But that does not matter, for we know how to regulate them. We are able to control them by training according to the method we are now practicing. Just this much is to understand the citta-sankhara reasonably well already.

Unveiling the Secrets of Life: a Manual for Serious Beginners