Statues I can't find anything about

I picked up these two statues today. I have been searching for an hour or two, to identify them or learn anything at all I can about them. I've searched through thousands of images, been comparing Buddhas from different countries, etc.

I found this website and saw the statue tag and now feel relieved. Please someone tell me anything you can about these.

I hope I'm not posting this in the wrong place. Thanks so much 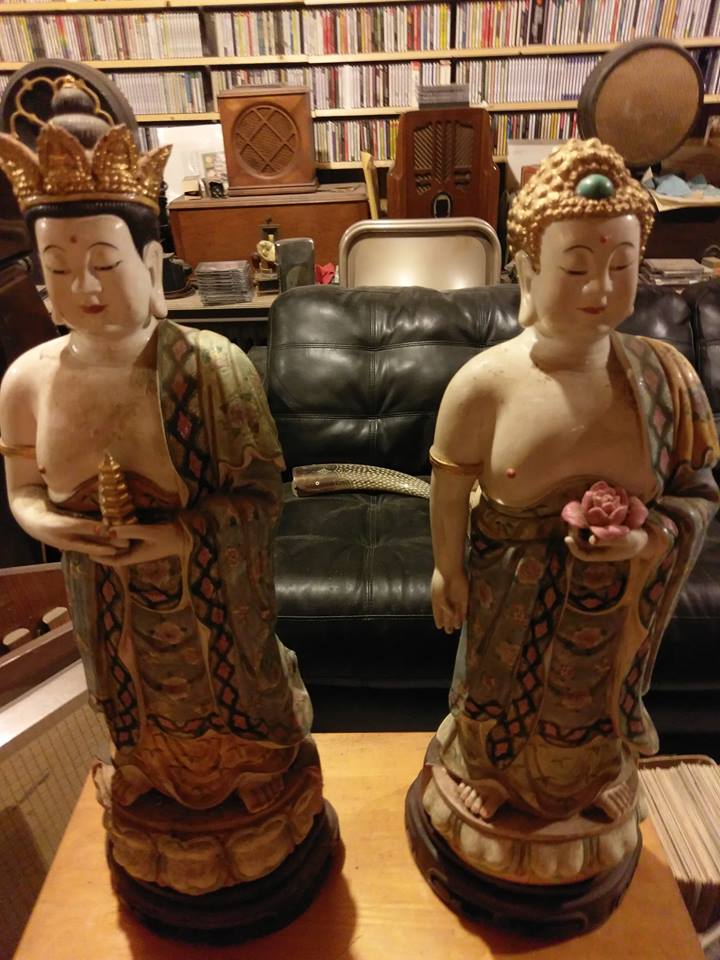 This is a great source for identifying Buddhist statues by what they are holding.

The Buddha on the right is a representation of the historical Buddha (Shakyamuni). You can tell by the head-pattern, which represent 108 snails that crawled on the Buddha's head. In Japanese Buddhism, a red lotus held in the left hand is called Benikairen (紅開蓮) and symbolizes compassion.

The statue on the left is more difficult to identify. It is crowned and the historical Buddha was generally not depicted with any jewelry (being worldly attachment), which leads me to believe this is a depiction of a Bodhisattva. He is holding a five-storied pagoda (Jap. gojū-no-tō 五重塔) which is identified with the "Medicine Buddha" (who is actually a Bodhisattva):

In Chinese depictions, he is sometimes holding a pagoda, symbolising the ten thousand Buddhas of the three periods of time.

I suppose the one on our right represent Gautama Buddha -- I say that because of the hairstyle, see Why this hair style on statues of the Buddha? He's holding a lotus (Padma). The elongated earlobes are also among the physical marks of the Buddha -- Did the Buddha have long ears?

The clothes, bases, heights (and so on) match -- they're a matched set -- I can't identify any other symbols on the clothing or base.

Perhaps they're made as a pair, rather than elements of a once-larger set.

I don't recognise the personally-identifying symbolism of the statue on our left (perhaps someone else will). Assuming that:

... then I presume the one on our left is no less than a Buddha too (and is not e.g. a mere attendant).

Some schools of Buddhism identify more than one Buddha (see e.g. the Medicine Buddha or the Five Wisdom Buddhas).

My guess, based only on the fact that there are only two of them, is that the second one might be Matreya (the Future Buddha) -- that would make sense as a pair, i.e. the previous and the future Buddha -- but I found nothing to confirm that those personal symbols represent Maitreya.

Another possibility, maybe, is that the second statue represent Gautama Buddha too. There's a beehive hair-style again. That appears to be an eight-petalled crown -- a lotus again which, like the Dharmachakra, represents the Noble Eightfold Path.

He's holding what appears to be a stupa. Could it be that the pair represent the Buddha before and after parinibbana? I don't know.

When you display them it may be respectful to put them in the highest place, above other things (see e.g. this answer) -- for example perhaps on top of a bookshelf, or on the top shelf.

Not the answer you're looking for? Browse other questions tagged buddha iconography statue or ask your own question.

13
Do all Buddhists abstain from alcohol?
4
Did the Buddha have long ears?
0
Why this hair style on statues of the Buddha?