Ignorance and the root of suffering?

Searching the Pali Canon for the "root of suffering", we find the direct definition only occurs in a few suttas:

We also have that ignorance is simply one product of dependent origination (SN 22.81):

And that craving, that feeling, that contact, and that ignorance are also impermanent, conditioned, and dependently originated.

Ignorance does indeed result in suffering, but to claim it as the root of suffering feels a bit misleading.

Can one assert “ignorance is the root of suffering?”

Can one assert “ignorance is NOT the root of suffering?”

In your answers, kindly include actual sutta references, preferably from the Pali Canon. This is necessary to avoid arguing about personal interpretation since supported translations are provided by ordained and well-respected monks. As a Sangha, we have to respect and uphold the Dhamma.

So, the root of the monkey's misery is craving, and not ignorance, as stated in SN 22.31:

“And what, bhikkhus, is misery? Form is misery; feeling is misery; perception is misery; volitional formations are misery; consciousness is misery. This is called misery.

But to uproot craving, the monkey must first overcome his ignorance.

If the monkey had ignorance of the working of the trap, but if he had no craving, he would not get stuck in the trap. If the monkey had craving but did not have ignorance, he could still neglect his knowledge and get caught in the trap, due to greed and clinging. Hence, craving is the root of suffering, and not ignorance. 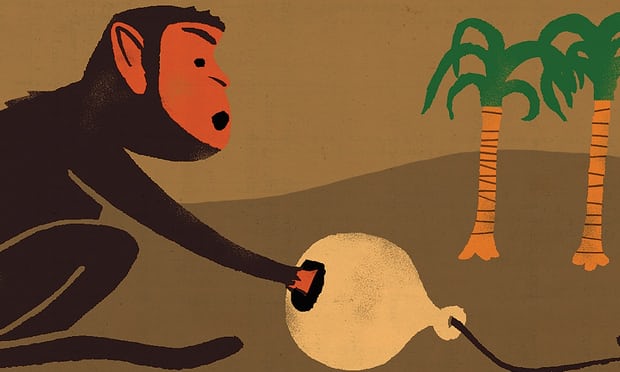 It is true that craving, feeling, contact, and ignorance are impermanent, conditioned, and dependently originated. Coming together of Ignorance and Contact gives rise to Craving which in turn gives rise to Suffering. If we abandon Ignorance or Contact or Craving or Feeling completely, the Suffering will cease. Therefore in a sense all of the above factors of dependent origination can be called the root of suffering.

Thanks to SuttaCentral and all of the other answers here, I would propose the following:

From Dependent Origination we have "Ignorance is the condition for...old age and death, sorrow, lamentation, pain, sadness, and distress". I.e., suffering originates in ignorance. For this reason it is misleading to say that "ignorance is not the root of suffering". Specifically:

Delight is the root of suffering. Ignorance planted the seed. Look for the root and do not plant the wrong seed.

Regarding the original question on ignorance and is/is-not the root of suffering:

The phrase root of suffering is a key phrase in Buddhism often associated by all directly with the words of the Buddha. For me to utter either of those phrases would therefore be an indulged conceit of representing myself as The Blessed One.

However, if any Buddha past or present should utter these phrases, that would be their prerogative. I do not consider it mine.

The issue of right speech and our diligence in quoting the Buddha is that in our careless discussion:

the discourses spoken by the Realized One—deep, profound, transcendent, dealing with emptiness—will disappear.

The question requires understanding exactly what the word "mūla" ("root") is meant to mean in terms of its general usage (which I cannot answer at this current time and requires a contextual analysis of the texts). However, given "attachment" actually is suffering itself, the word "root" may not mean a "preceding cause" ("hetu") but be something much closer to the subject/thing.

Delight in feelings is attachment - MN 38

In short, suffering is the five aggregates attached to - SN 56.11

For desire is the root of suffering. Chando hi mūlaṃ dukkhassa.

In MN 22, something that is essentially 'causeless', namely, ignorance, is cut off at its root:

Herein the monk has abandoned ignorance, has cut it off at the root..

Abandoned the round of re-births, leading to renewed existence; he has cut it off at the root...

Abandoned craving, has cut it off at the root...

Abandoned the five lower fetters, has cut them off at the root...

Abandoned the conceit of self, has cut it off at the root...

The contextual analysis becomes more clear with SN 15.9, which says:

Therefore, as I suspected, the word "mūla" might be closer to the subject/thing itself than being a distant preceding cause. In SN 15.9, it is the "bottom/base" of a stick (rather than a more distant cause, such as tree, tool or carpenter that made the stick). This appears apparent in SN 4.24 which says:

“Having dug up entirely the root of sorrow, Guiltless, I meditate free from sorrow. Having cut off all greedy urge for existence, I meditate taintless, O kinsman of the negligent!”

Again, Snp 4.14 is about a very close cause rather than a distant cause:

One should completely extract the root of proliferation and reckoning— The notion, “I am the thinker”.

Wholesome zeal (chanda) is the root of all dhamma practise.

This says without zeal (chanda), dhamma practises will be ineffective, similar to how a car cannot drive without fuel.

I think 'mūla' is a characteristic or cause of a thing that is very closely tied to the thing. Therefore, 'ignorance' is probably too distant a cause to be the 'mūla' of suffering because what makes suffering burn is the craving, attachment & egoism.

"Ignorance" is the first cause/leader of all unskilful qualities, which includes attachment.

Monks, ignorance is the leader/foreunner in the attainment of unskillful qualities...

Bhikkhus, this is said: ‘A first point of ignorance, bhikkhus, is not seen such that before this there was no ignorance and afterward it came into being.’

In AN 3.69 (Akusalamūlasutta) it's defined as one of the three "unskillful roots".

And I think that earns it its place at the centre of the wheel of life -- maybe not in Theravada though:

The Theravada-tradition does not have a graphical representation of the round of rebirths, but cakra-symbolism is an elementary component of Buddhism, and Buddhaghosa's Path of Purification (Visuddhimagga) contains such imagery:

It is the beginningless round of rebirths that is called the 'Wheel of the round of rebirths' (saṃsāracakka). Ignorance (avijjā) is its hub (or nave) because it is its root. Ageing-and-death (jarā-maraṇa) is its rim (or felly) because it terminates it. The remaining ten links (of the Dependent Origination) are its spokes (i.e. karma formations [saṅkhāra] up to process of becoming [bhava]). 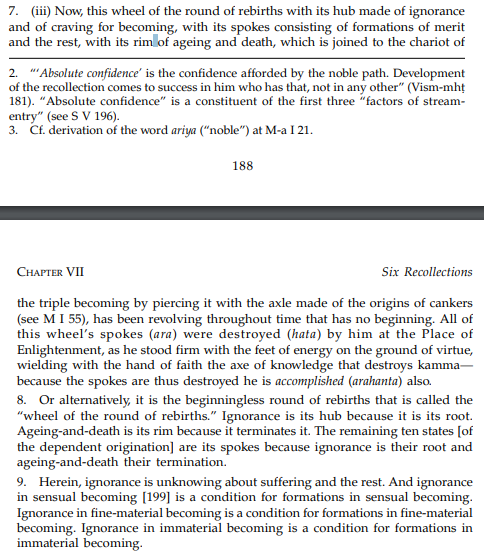 In context, I guess that Buddhaghosa derives that from its position as the first of the 12 nidanas.

There's also doctrine in the Abhidhamma, for example from of A Comperehensive Manual of Abhidhamma edited by Bhikkhu Bodhi:

(1) Delusion (moha): Moha, “delusion,” is a synonym for avijjā, “ignorance.” Its characteristic is mental blindness or unknowing (aññāṇa). Its function is nonpenetration, or concealment, of the real nature of the object. It is manifested as the absence of right understanding or as mental darkness. Its proximate cause is unwise attention (ayoniso manasikāra). It should be seen as the root of all that is unwholesome.

Or page 31 of A Manual of Abhidhamma by Narada Maha Thera:

Lobha, dosa, and moha are the three roots of evil. Their opposites are the roots of good.

Lobha, from √ lubh, to cling, or attach itself, may be rendered by ‘attachment’ or ‘clinging’. Some scholars prefer ‘greed’. Craving is also used as an equivalent of lobha.

In Pàli such aversion is termed dosa or pañigha. Dosa is derived from √ dus, to be displeased. Pañigha is derived from ‘pañi’, against, and √ ‘gha’ (han), to strike, to contact. Illwill, hatred are also suggested as equivalents of ‘pañigha’.

Moha is derived from √ muh, to delude. It is delusion, stupidity, bewilderment. It is ‘moha’ that clouds an object and blinds the mind. Sometimes ‘moha’ is rendered by ignorance.

According to the Abhidhamma, moha is common to all evil. Lobha and dosa do not arise alone, but always in combination with moha. Moha, on the other hand, does arise singly—hence the designation ‘momåha’, intense delusion.

Not the answer you're looking for? Browse other questions tagged theravada the-buddha pali-canon ethics or ask your own question.

12
Logic of Emptiness still unconvincing. Please help explain
2
At what point do we arrest reification?
3
Craving vs Interest
3
Concentration with no object?
1
Can someone provide explanation on dependent origination
0
Are the Pali words "cause" ("hetu'), "condition" ("paccaya"), "nutriment" ("ahara") and "root" ("mula") synonyms?

8
Which suttas in the Pali canon are relatively early or late?
2
Was Anuruddha, one of the ten Great Disciples of the Buddha, born in Sri Lanka?
5
Why does the Buddha, in the Pali Canon, periodically engage in harsh speech?
2
Suffering due to non-self-related preconceived notions in Theravada
5
Don't teach Dhamma to those who can't appreciate it or aren't interested
2
The Buddha and the act of smiling
1
Vaccination, Ethics and Morals
3
Does "old karma" come from our parents, family, community, surroundings?
4
How can the Buddha (after he was enlightened) reflect that he was not at ease and then became at ease in seclusion?