What are the requirements or preconditions for someone to ordain?

Can a person ordain at any age? Can he or she have children? In a nutshell, what are the things that will not allow someone to ordain?

Disclaimer: This is the current knowledge I have on the Theravadin tradition.
Here is a summary that answers your question:

The first part of the ordination procedure for bhikkhus is known as the Going Forth into Homelessness (pabbajjaa). If it finishes with just that — without going on to the Questioning of the candidate and the Acceptance of him by all the gathered bhikkhus into the Bhikkhu Sa"ngha — the candidate is known as a saama.nera or novice. This is usually the case when the candidate is less than the twenty years of age necessary to become a bhikkhu. A very young boy is not allowed to become a novice either, but the minimum age will vary according to place.

A saama.nera wears the 'yellow robe' like a full bhikkhu — except he does not have the sa"nghaa.ti (double-thickness robe) — and leads a very similar life. In some places a period as a novice forms part of the preliminary training to become a bhikkhu, while some men decide to remain saama.nera for various reasons. The saama.nera keeps the Ten Precepts and the 75 Training Rules (sekhiya) and some other rules of the bhikkhu. Later, when he is ready and if he is old enough, he can ask the bhikkhu community for full ordination (upasampadaa).

In the Pali texts, when a man decided to become a bhikkhu, he is often quoted as saying: "Confined is the household life, a path of dust; the going forth is open and spacious. Not easy is it living in a house to lead the religious life absolutely fulfilled and purified, as polished as mother-of-pearl. Suppose I were to shave off my hair and beard, clothe myself in ochre robes and go forth from homelife into homelessness?" (HS ch.19)

However, anyone wishing to become a bhikkhu must fulfill certain conditions about which he will be questioned during the actual ordination procedure. The candidate must be male and at least twenty years old. He must never have committed any grievous crimes and, if previously ordained, he must not have been guilty of any Defeater (Paaraajika) offences or have entered some other religion without disrobing first. He should also be of good reputation; fit and healthy enough to carry out the duties of a bhikkhu; not in debt; not subject to government service; and have permission from parents or guardian.

The Ordination ceremony requires a prescribed boundary (siima), a preceptor (upajjhaaya) and a quorum of bhikkhus to validate the formal Sangha Act. In the formal procedure the candidate is examined as to the necessary qualities and, if all the bhikkhus are satisfied, they receive him into the Sangha, the Community of Bhikkhus.

It is in this way that yet another link is added to the bhikkhu-lineage. Henceforth, the new bhikkhu can participate (and make up the necessary quorum) in future assemblies and help receive other new bhikkhus — as bhikkhus have continued to do for two and a half thousand years. (See EV,I,p.4; OP)

When a candidate requests full admission to the Community (after the saama.nera ordination) he does not make any 'lifetime vows' but offers himself for training and instruction under his Preceptor's guidance. At the end of the ordination ceremony, the Preceptor will immediately instruct the new bhikkhu (or arrange that he is properly taught) about the Paa.timokkha Rule and the other principles that all bhikkhus should follow and observe.

For the first five years a bhikkhu is called navaka ('new one') and he must live 'dependent' (nissaya) on a senior bhikkhu — either his preceptor or teacher (aacariya) — training in the ways of a bhikkhu. The preceptor and the new monk should be kind and helpful to each other, in almost a father-and-son relationship. A new bhikkhu who no longer lives under his preceptor must take another senior bhikkhu as his teacher and depend on him instead.

For the next five years after his navaka period, the bhikkhu is called majjhima, ('one in the middle') and he is allowed to live by himself if he is accomplished in certain qualities.

When a bhikkhu has completed ten Rains he is called Thera, which can be translated as 'an elder who is worthy of respect.' If he is also accomplished in certain extra qualities, he is allowed to give ordination as preceptor, to be a teacher, and have young monks live in dependence on him.

-The Bhikkhus' Rules: A Guide for Laypeople

Note: Requirement of being male is not always necessary and is dependent on the specific monastery in which the ordination takes place.

For a more in-depth answer, see the chapter on Ordination in the Buddhist Monastic Code by Thanissaro Bhikkhu.

Here's a chart of the procedure in some western monasteries (in Asian monasteries the ordination can be immediate): 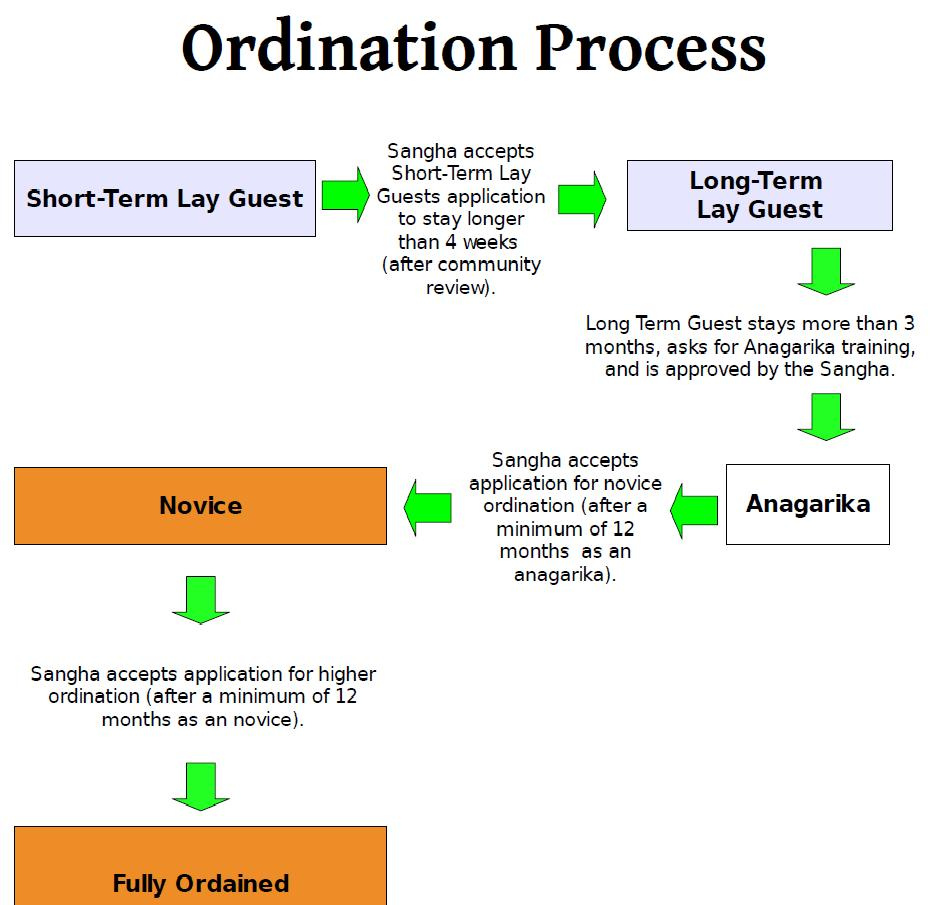 The first reference in Unrul3r's answer doesn't seem to mention age, but the second one does:

Age twenty to forty-five is the usual age range.

We have found that in general the difficulties of adjusting to monastic life increase with age. For this reason people who seem most suited to this lifestyle tend to fall between the ages of twenty to forty-five. However, if a person outside this age range is able to adapt then exceptions can be made.

All applicants must be under 50 years of age. No academic degree is required. If you are under 18, you must have permission from your parents. Those who have serious or terminal illnesses or severe disabilities can not be accepted as monastics.

There's a discussion on that topic on DhammaWheel -- here are some quotes I selected (talking only about maximum age, not minimum age):

One more (all one user from the same thread):

So, there is a cut-off age in at least one Canadian monastery. That seems to be a broader limitation across much or all of the West. There is no cut-off age in Thailand or Sri Lanka.

The question I wonder at is: ok, so ordination at 53 (my age) in parts of Asia is a possibility--it's not excluded by rules or convention. But how "realistic" is it setting forth at my age?

Actually I am a man; I mentioned Aya Khema only because that is one example I know of where a person my age ordained in Sri Lanka. I know it is possible, that I would be accepted in SE Asia. For me it is mostly a question of the practicality of ordaining late in life. Aya Khema returned to the west before long. It seems like most of the Bhikkus from the West either disrobe or at least return to the West eventually. I wonder that so few seem to stay, and it makes me wonder if the life there is very harsh, which begs the question: perhaps 53 is pushing it a bit.

I'm studying Singhala now, to try to increase the odds that I can integrate.

In summary there are formal (predefined) cut-off ages in many or most Western monasteries (although not all) -- and maybe less so in the East.

"West versus East" is too rough a generalisation, though -- here's something from Korea for example, news from 2016:

Jogye Order of Buddhism to raise maximum age for ordination

As early as next year, the Jogye Order of Buddhism will be making it possible for older people to join the monastic life. Currently, the maximum age for ordination is 50 years old.

“We’re going to set up a special post-retirement monastic ordination system so that people who dream of living a life of religious discipline after retiring can join Buddhism,”

said Ja-seung, President of the Jogye Order. Ja-seung made the comments during a New Year’s press conference held on Jan. 13 at the South Korean Buddhist History and Culture Museum, located in the Jongno District of Seoul.

“The rules of the order state that ordination can only take place until the age of 50. But people are living longer, and the social conditions have changed,” Ja-seung said. “We’re going to solicit people’s opinions with the goal of changing the rules during the meeting of the central committee in November of this year so that people who are well-suited for religious practice can be given new choices and opportunities.”

5
Ordination procedure in Theravada Buddhism - What are grievous crimes?
3
When is the best time for ordination?
3
How to ordain as a Theravada monk?