Is there really any evidence that anything goes beyond death ? By that I mean our self awareness. That our awareness transcends death? I know there is absolutely no concrete evidence of reincarnation. I'm not denying its possible. Just denying there is any scientific evidence However i have read claims that the self aware part of us-the part thats aware we are thinking goes beyond death and was here before birth ? Is there any hard evidence for this ?

I know there is absolutely no concrete evidence of reincarnation. I'm not denying its possible.

First, you need to understand what is an Empirical evidance, with that, you have to understand that in the matter of the object of your question, an empirical evidence based on pure observation cannot be provided, no matter what.

The accounts of rebirths are purely subjective if you google about such matters, you will find that some authentic psychologists have indeed written books based on tons of interviews they have conducted. Now as a direct evidence cannot be obtained and all the data collected is subjective, all this research goes down the drain as 'pseudoscience' or worst 'woo-woo'.

the self-aware part of the us-the part that's aware we are thinking goes beyond death and was here before birth?

This is again the Hindu theory of eternal Aatman, but in the Buddhist context, the Buddha said in Assu Sutta,

This is the greater: the tears you have shed while transmigrating & wandering this long, long time — crying & weeping from being joined with what is displeasing, being separated from what is pleasing — not the water in the four great oceans.

So, he clearly indicated that part of you goes on living even after death, but where the Buddha contradicts with the Hindus is that He insisted that the self itself is an illusion, so what lives of you after the bodily death is an interplay of five aggregates, the exact dynamics has not been mentioned.

Is there any hard evidence for this ?

I will tell you a small exercise, do it for yourself, you will get a hard subjective experience.

Now, this is not a hard empirical evidence, it's solely your own worldview out of your own experience. There is an obvious ability of human mind to know things. Skeptics are mere Physicalists. 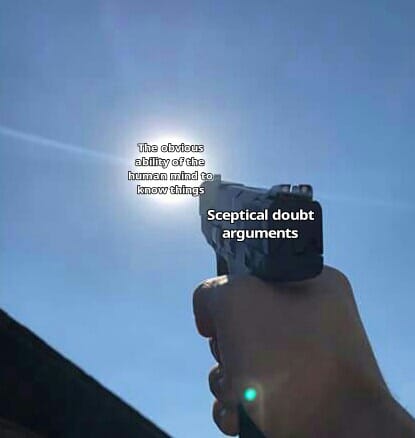 I have no idea how would one be able to prove that. Near death on the other hand can be researched scientifically. And even research in that area can be sketchy, depends of course on the research method and so on.

Anyway. If you find NDE acceptable as proof of existence beyond death, then I could advise books by Pim van Lommel. A Dutch cardiologist who did a few studies.

The Mulapariyaya Sutta deals extensively with questions of "our self awareness".

The sutta goes on to describe an alternate perspective:

That perspective is extended to assert:

Because he has known that delight is the root of suffering & stress, that from coming-into-being there is birth, and that for what has come into being there is aging & death. Therefore, with the total ending, fading away, cessation, letting go, relinquishment of craving, the Tathagata has totally awakened to the unexcelled right self-awakening, I tell you.

In other words, the sutta invites us to consider such questions through the evidence of our own practice.

I'm not sure how much emphasis you place on the "self" in self-awareness. I'm also not sure what you think of as "hard evidence." However, I do think it is possible to arrive at the conclusion that mere awareness cannot be extinguished with the break up of the body through pure reason alone. Is this what you are interested in?

It was reading about various people’s experiences of recalling previous lives and experiencing consciousness outside of the body that helped me to shake my materialistic world-view. Some of the descriptions are so convincing. It was the motivating factor that made me try to get establish how consciousness could arise from purely physical sources, such as exist in our brain. I used a thought-experiment where I compared our brain to a computer and tried to establish how my direct experiences such as creative reasoning could arise from a combination of hardware and software. Certain scientists claim that artificial intelligence is possible that can directly mimic the functions of the mind, but they are just claims. AI can appear to be very clever, but it always requires human programming and interpretation.

Not the answer you're looking for? Browse other questions tagged samsara life-after-death or ask your own question.

8
Is there an equivalent of heaven and hell in Buddhism?
10
Buddhist path X Romantic Relationships and Sons
14
Explaining non-attachment to the very attached
2
Difference between Samsara and Dukkha
4
Losing interest in Samsara and transformation one undergoes when following Buddhism
1
Plato's Parmenides, Samsara and Nirvana
1
Memory about the past life
0
Literature on ending Samsara on micro scale
0
Possibility of nothing but all-encompassing, absolute Nibbana without Samsara? If so, is sustainability possible (and how)?
4
Do Mahayana Buddhists explain birth and extinction in the same way?