One word in Pali Canon seems to be especially challenging for translators to convey. This word is "papañca" (e.g. MN18, DN21, Sn 4.11, AN4.173). Some attempts at translating papañca include "exaggeration", "proliferation", "association", "conceptualization", "objectification", and "reification".

How is papañca (prapañca in Sanskrit) explained by Mahayana philosophers such as Nagarjuna, Asanga, and Tsongkhapa?

I am not a translator and do not know of the proper translation, but another closely related word that I'm particularly fond of is hypostatize. There is also the noun form hypostatization.

Mark Siderits and Shoryu Katsura translate the Sanskrit version of this term - prapañca - as hypostatization in Nagarjuna's Middle Way so it looks like I'm not too far off :)

The general definition is very close to reification. It means to attribute real ontological identity to a concept and Mirriam Webster gives the root as the Greek hypostatos which is "substantially existing."

Here is my favorite example of hypostatizing...

From Insight Into Emptiness page 258, “For example, a young woman may want to have a child. When she is asleep, she dreams she gives birth to a child and is elated. But later in the dream, the child dies and she is devastated. However, on waking, she sees that neither the exhilarating appearance of having a child that brought her joy nor the horrible appearance of the child’s death that caused her anguish is real.”

Before she woke up she hypostatized her child (attributed real concrete existence to it) and this led to both elation and anguish. After she woke she stopped the hypostatization and the elation and anguish faded. However, there is also something very subtle happening when she woke up: she considered the dream unreal in relation to something else! Unreal and real are a dichotomy and mutually dependent notions :)

Another great and famous example is that of how three different beings perceive a cup filled with a liquid substance.

Which is real? Which is unreal? What is worthy of being hypostatized and what is not? This is sometimes referred to as the simile of the three cups of liquid in Mahayana texts.

Another famous example by Nagarjuna is the body of a woman being seen differently by an ascetic, a lustful man, or a wild dog:

With respect to the same female body,
Three different notions are entertained
By the ascetic, the lustful and a [wild] dog,
As a corpse, an object of lust, or food.

Each hypostatizes the body as very different things. Which is real? Which is unreal? Can the body be thought of as having any essence whatsoever? Or is each perception thoroughly and utterly relative and dependent? Is there anything whatsoever objectively real or worthy of being hypostatized in such a situation? Can any of it withstand analysis?

In fact, prapañca is a concept so important to Nagarjuna that he opens his famous Fundamental Treatise on the Middle Way with this: 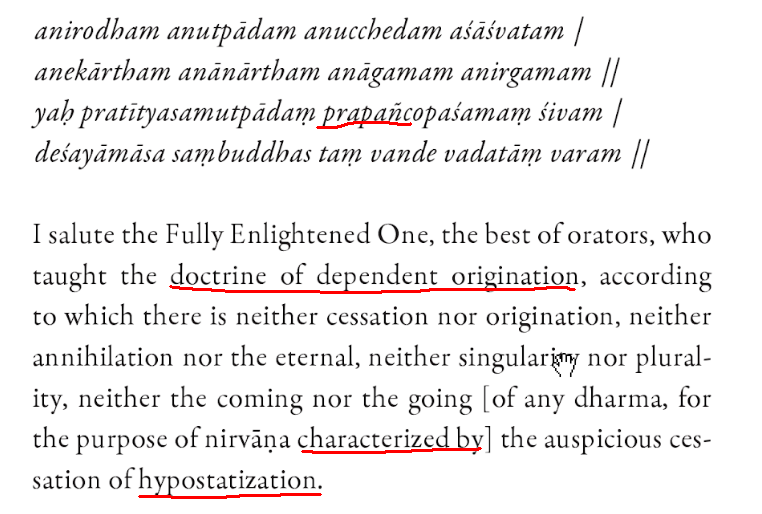 And here is how Siderits characterizes the commentaries on this opening Homage Verse: 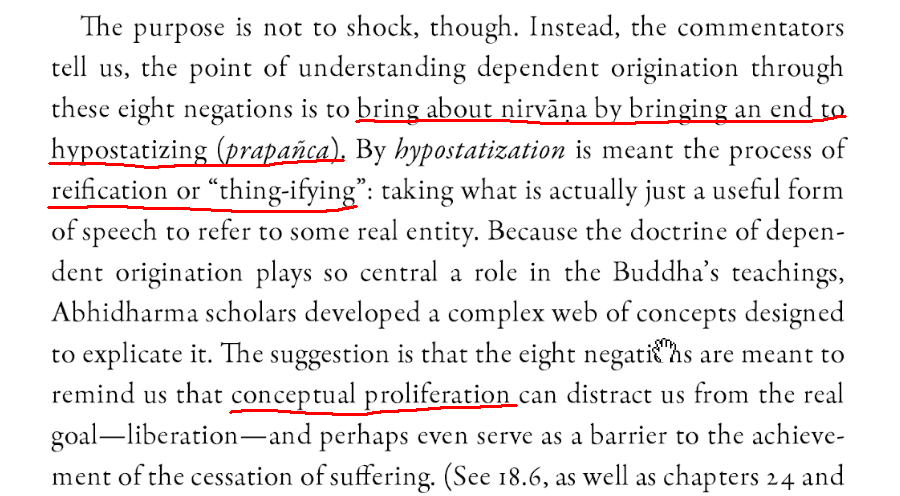 Indeed, if you look through the rest of Nagarjuna's verses you will see that this is a major subject of the treatise as the commentaries attest.

Here is that very same Homage Verse as translated by Garfield and commented on by Je Tsongkhapa:

I prostrate to the perfect Buddha,
The best of all teachers, who taught that
That which is dependent origination is
Without cessation, without arising;
Without annihilation, without permanence;
Without coming; without going;
Without distinction, without identity
And peaceful—free from fabrication.

Je Tsongkhapa cites Chandrakirti saying in his Prasannapada that these Homage Verses, "reveal the content and ultimate purpose of the Treatise."

Further, this site gives prapanca in Tibetan as spros pa which is also how it is used in Je Tsongkhapa's Ocean of Reasoning:

A good reference on this topic is Bhikkhu Ñāṇananda's 155 pg. book, Concept and Reality in Early Buddhist Thought. It is available online as a free download.

Quoting from the blurb on the back cover:

This work deals primarily with two important, but controversial doctrinal terms, found in the Pali Canon - Papañca and Papañca- saññā-sankhā. The characteristically Buddhistic doctrine of 'not-self' (anattā) is shown in new dimensions of significance having far-reaching implications not only in the context of Buddhism but also for the student of philosophy, psychology and ethics, as well.

"What is Papañca?" is precisely the name of the article by Andrew Olendzki, the editor of the Insight Journal, who tries to answer this question, and then relates the purpose of vipassana later in his article, beyond my quote below.

Basically, papañca is the layers of thoughts and concepts that obscures what is barely perceived.

Imagine you walk through a canteen line and the canteen staff places five pieces of potato on your plate, while placing six pieces of potato on another person's plate. If you get angry about this, thinking perhaps, that the canteen staff is discriminating against you perhaps due to your ethnicity - well, this is an example of papañca, where it gives rise to aversion. You imagined a lot of stuff, on top of what is insignificant.

Another good example is this answer, where the author wrote that she was terrified because she misinterpreted the nightly sounds of cats mating as an adult woman and her baby crying in pain.

I've recently spoken to a depressed friend who did not feel that he is good enough and suffers from a lack of self-confidence. He cites examples of where others are better than him. I quoted qualities and examples of him that are better than each of those other persons and he was shocked. He never saw it in that way before. He was too obscured in his mental commentaries of his deficiencies that he couldn't see his good qualities and personal strengths.

But papañca can be a lot milder than that. For e.g. your feeling of patriotism or pride towards your country or ethnicity or religion is in my opinion, papañca too, as it a built-up concept.

In the article, he continues to speak of Vipassana as a means of one seeing things as they truly are.

The opposite of "papañca" could be "yathābhūtaṃ pajānāti" which means "seeing things clearly as they truly are".

From Andrew Olendzki's article, "What is Papañca?":

Papañca is one of those delightful Pali words that rolls off the tongue (or bursts through the lips, in this case) and hits the nail on the head. It points to something so immediate, so pervasive, and so insidious that it deserves to join the English language and enter into common usage. The exact derivation of papañca is not entirely clear, but its sense hovers somewhere between the three nodes of 1) to spread out or proliferate; 2) an illusion or an obsession; and 3) an obstacle or impediment. The place where these three meanings converge in experience is not hard to locate. Sit down with your back straight and your legs folded around your ankles, close your eyes, and attend carefully to your experience. What do you see? Papañca.

This term is used to describe the tendency of the mind to 1) spread out from and elaborate upon any sense object that arises in experience, smothering it with wave after wave of mental elaboration, 2) most of which is illusory, repetitive, and even obsessive, 3) which effectively blocks any sort of mental calm or clarity of mind.

These are the narrative loops that play over and over in the mind, the trains of thought pulling out of the station one after another and taking us for a long ride down the track before we even know we’re aboard. Bhikkhu Bodhi, eloquent as always, calls papañca “the propensity of the worldling’s imagination to erupt in an effusion of mental commentary that obscures the bare data of cognition” (from note 229 in Majjkima Nikaya (MN)).

How to analysis this vocabulary?

What does pac(a/i) of papañca mean?

To refer papañca to kilesa-vatta (unwholesome-causes) of the dependent origination. I described above.

Where are kilesa-vaṭṭa (formation) in dependent origination?

– And what, bhikkhus, is paṭicca-samuppāda?

Conditioned by avijjā, bhikkhus, there are saṅkhāras

conditioned by saṅkhāras, there is viññāṇa

conditioned by viññāṇa, there is nāmarūpa

conditioned by saḷāyatanas, there is phassa

conditioned by phassa, there is vedanā

conditioned by vedanā, there is taṇhā

conditioned by taṇhā, there is upādāna

conditioned by upādāna, there is bhava

conditioned by bhava, there is jāti

Which are the evidence sutta of this answer?

Why atthakathā comments papañca as the Resistance?

Why atthakathā comments papañca as only Taṇhā, Diṭṭhi, and Māna, but the sutta refer to 7 anusaya?

It is just a brief of those 7 anusaya to cover 10 fetters in brief 3 kilesa, some point of atthakathā comment more than 3 as well. So, the sutta and atthakathā similarly explained papañca.

That's about all there is, the only places it's used.

In summary I think that:

Not going to post a comprehensive answer (because I don't have one), just offering my contribution to etymological analysis:

It is possible that Sanskrit prapañca is related to prāpanīya - an adjective that roughly means "an object of acquisition" -- "the acquirable", "the attainable", "the intended upon", "that to be obtained".

In Dharmottara commentary on Dharmakirti's work "Nyayabindu" focused on epistemology and phenomenology, prāpanīya is used to indicate the final object of cognition (in contrast with the object of raw sensory perception). It is used along with its synonyms adhyavaseya – "the ascertained", "the determined", "the resolved", "the apprehended" and pravrttivisaya – "object of action", "object of engagement", "object of endeavor". (source: Buddhist Philosophy: Essential Readings, by William Edelglass (Editor), Jay Garfield (Editor))

If we assume prāpanīya and prapañca to be related, and take into account the two synonyms, the meaning of prapañca could be rendered as "to establish as an object of acquisition" or - as Thanissaro Bhikkhu suggests - to objectify.

Not the answer you're looking for? Browse other questions tagged sunyata papanca or ask your own question.

6
Is Nibbana a state of mind or an element (dhamma)?
4
Did the Buddha ever define what he meant by “self”?
7
Are all forms of Dukkha related to a sense of self?
2
Is the Mahayana shunyata same as the Theravada papanca?
2
Suffering due to non-self-related preconceived notions in Theravada
2
What does MN 18's “delineate a delineation” phrase mean?
4
Linking Madhyamaka emptiness to Theravada emptiness through papanca
4
How can we use the triple round model to understand dependent origination?

12
What is the difference between non-self and emptiness?
2
What does Buddhism say about the existence of a self?
4
What does it mean when something has “no self-nature”?
2
What is Indra's Net, according to Mahayana Buddhism?
0
If everyting comes from emptyness than what is energy
4
What *is* intrinsically real? Is the “unconditioned”, “absolute”, or “ultimate” intrinsically real?
2
Is the Mahayana shunyata same as the Theravada papanca?
2
What are the “seven stations of consciousness” supposed to mean?
5
What is the purpose of the Mahayana 'emptiness' doctrine?
2
What is the difference between papanca and sankhara, and in particular citta-sankhara?