What are the advantages/disadvantages of meditating with eyes closed?

I'm not normally distracted by noise, touch, smell or taste when I meditate. But I do keep looking and looking and looking. Sometimes I'll fixate on a crack between the spars of wood on the floor, sometimes something of more soteriological value like a statuette.

What are the advantages/disadvantages of meditating with ones eyes open or ones eyes shut?

One of the practices I do is a just sitting practice. I think it is the same as a zazen practice but we (Triratna Buddhists) don't use that terminology. For this practice we are encourage to keep our eyes open as the practice is just being with whatever is. This includes all 6 senses so our sight is part of that and should be brought into the meditation practice.

That said I rarely do this. I find the sight sense overwhelming and I find it much easier to do this with just hearing, touch and bodily sensations. I think sight is our dominant sense so it's not surprising to me that it's hard to experience to world as it is when you are looking at it. I find sight and the sense of self is so close that it's difficult to untangle it. We are often told that it's impossible to do 'just sitting' wrongly. However if it were possible to do it wrong I'm sure I would be.

As other answerers have said eyes open is a good technique to guard against the sloth and torpor hindrance. I've actually have been recommended the Padmasambhava stare as an antidote (the great man himself is shown below doing it). Open you eyes as wide as you can and go for the full stare. It actually works - you feel less tired. The downside is that you look ludicrous. However that shouldn't matter as hopefully everyone else is meditating with their eyes shut!! 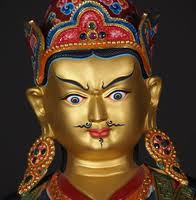 Meditating with the eyes open allows more connection to the sensory experience, while meditating with the eyes closed provides more insulation from distraction. There are advantages and disadvantages either way. With less distraction, it's easier to stabilize the mind; this might be very helpful for some people. On the other hand, with less sensory input, it's easier to get lost in your own little world, lost in wandering thoughts, lost in experiences of bliss that might arise from strong states of concentration. In addition with long-term practice it's somewhat easier to develop a sense of separation from the world, which is different from "non attachment" and can lead to people acting like they're better than everyone else, etc.

On the other hand, with eyes open and more sensory input, it may be overwhelming and difficult to stabilize the mind at all. Only a few people are probably capable of doing any kind of meditation while, say, staring at a busy street scene in Manhattan (but some are!) But on the other hand, the meditation practice that does develop will be more ensured to maintain a connection with the senses and the outside world. It is more likely to develop an equanimity and mental stability that is tolerant of the vicissitudes of the outside world, rather than an equanimity that compels one to "run away" to the forest, the mountains, the monasteries.

There is somewhat of a tendency that traditions emphasizing individual liberation from suffering teach meditation with the eyes closed; while traditions emphasizing first the development of compassion for others teach meditation with the eyes open. (Because of the differences mentioned above.) Nevertheless, in either case, there is some wiggle room for whatever works best for the individual at her/his current stage of development.

If you practice with a qualified teacher, someone who is good at deeply perceiving you rather than merely spouting lists of instructions, then they will be able to give you good advice. Otherwise, feel free to experiment, keeping the opposing considerations in mind, and find a good balance for yourself.

For a beginner it is best to keep your eyes closed to be free from distractions. When you can concentrate better it is advisable to slightly open your eyes to let some light in if you are feeling drowsy or if it is in the early in the morning or late in the night.

When you have your eyes open you can get distracted but sometimes having them slightly open to get some light in it might help fight drowsiness. And vise versa if your eyes are closed.

When I read your question I felt one point where I would break your sentence:

Instead of stepping further. What I did in your case were: observe myself, what is happening with me when I fixate on the crack? I'd give myself time to explore this myself. Observe it next time when it happens again... Just let it happen and look at that process and the change which it does on me, my mental status and my feelings... also I'd observe that emotion that I'm beginning to fear that this is not good or allowed... ;-)

Another type of question is this:

What are the advantages/disadvantages of meditating with ones eyes open or ones eyes shut?

I myself like it more to close my eyes for focusing more on my insight. But also having eyes open is sometimes good, sometimes I even challenge myself to see what is different then if they're open for longer interval in my meditation...

here Bhante explaines really well the best way and why

Not the answer you're looking for? Browse other questions tagged personal-practice meditation-practicalities or ask your own question.

1
Due to coming together of what does the dream arise?

6
Meditation object: Use color seeing when eyes are closed
6
Meditating with an overwhelming emotion
9
How effective are guided meditation sessions in achieving the benefits of meditation?
8
What is the best way to practice humility
3
Meditating with chronic illness
3
What are the criteria for calling someone a high or low capacity?
3
Bare awareness while meditating in the Mahasi Sayadaw tradition
2
Any cure for blurred vision after sitting with eyes half-open?
2
What to do when a thought comes up while meditating
2
Are there studies about the difference between meditating in the morning versus in the evening?