Is Vinanna a Reification of Recognition?

I read on the Internet that Experience (Vijnana) which is really nothing but reification of Recognition (or Interpretation) of new observations in terms of internalized old observations.

Is this view or idea taught in the Pali Suttas? If so, please provide some quotes?

I think that both these questions depend on the meaning of the word "reify".

I guess you understand "reify" to mean "say that something is real when it isn't" -- and so you dislike nidanas being described as reifications (but maybe you'd disagree with putting words into your mouth like that).

IMO "to reify" means to perceive an activity or verb as an object or noun -- e.g. from "running" or "to run", you derive "a runner". I may be wrong but I think I read once that Chinese doesn't do this, i.e. that its grammar/syntax doesn't split words into nouns and verbs and it would use the same word in a sentence for "running" and/or "runner" (and so it's difficult to translate Chinese, because to produce grammatical English from it you need to add reifications, i.e. subject/verb distinctions).

Reification also happens not only with verbs but with adjectives -- e.g. from "angry", where "angry" is an adjective, you derive the noun "anger". These tend to be so-called abstract nouns.

Even more generally I think that reification can be used to represent the notion that because a word exists the corresponding thing exists -- e.g. "god", but see also "unicorn". That does have some parallels, although more subtle, in Buddhist doctrine: see e.g. descriptions of "a self" or "a chariot".

Is this view or idea taught in the Pali Suttas?

I don't know if that's an accurate quote or your paraphrase. It sounds like it's meant to be a strawman i.e. easy to knock down.

Firstly because it's saying that something is "really" something, which begs this question for a start.

Thirdly because ("in real life") recognition and experience are complicated processes -- which are here described or defined using single words (i.e. "recognition" and "experience"). You seem to be assuming that the words exactly match the "reality" (by the way, note that "reality" is etymologically similar to "reification" i.e. based on the same root). Then you're asking whether the relationship between the words ("experience" is a "reification" of "recognition") is an exact match ("is really nothing but") the relationship in reality. And as I said I think the answer depends on the definitions of the words or your understanding of the meaning of the words -- i.e. "what does reification mean in this context?"

Anyway, I suppose it's true that "reification" isn't a view taught in the suttas. FWIW the only place I find the word on Access to insight is in the definition of the word papanca

papañca:
Complication, proliferation, objectification. The tendency of the mind to proliferate issues from the sense of "self." This term can also be translated as self-reflexive thinking, reification, falsification, distortion, elaboration, or exaggeration. In the discourses, it is frequently used in analyses of the psychology of conflict. [MORE]

I'm not sure it's safe to assume, though, that whatever you were quoting was intending to convey this meaning of "reification" -- I suppose one should read the quote in its larger context to try for an understanding of what message they were trying to convey.

Perhaps (I only guess, since you didn't reference the quote) in this context "reification" was supposed to point to a difference between what's dynamic (current, ever-changing) versus static (stored memories or snapshots, and/or assigning specific "solid" words or nouns to describe the dynamic).

FWIW I think that suttas often suggest we identify things as adjectives rather than as nouns -- e.g. to categorise things as "skilful or not-skillful", or as "not mine", etc. -- though of course it also uses a lot of nouns (including many abstract nouns) like "sensuality" or "dispassion" and so on.

It is memorizing [sañjānana] to memorize again after [puna sañjānanapaccayanimittakaraṇa]. 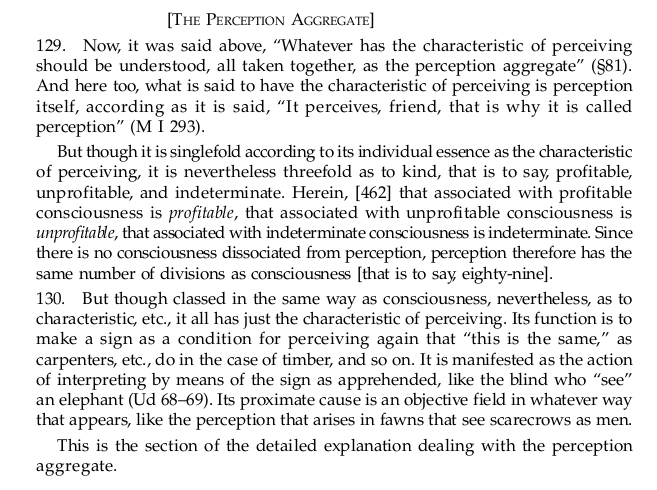 There are more information in the note book of saṅgaha, too:

The meaning of this term widely varies according to the context. To avoid unnecessary confusion, it is best to understand the specific meaning used in the particular connection as a universal mental state.

The chief characteristic of saññā is the cognition of an object by way of a mark as blue etc. It is saññā that enables one to recognize an object that has once been perceived by the mind through the senses. "Its procedure is likened to the carpenter's recognition of certain kinds of wood by the mark he had made on each; to the treasurer's specifying certain articles of jewelry by the ticket on each; to the wild animal's discernment in the scarecrow of the work of man."

"Perception," according to a modern Dictionary of Philosophy, "is the apprehension of ordinary sense-objects, such as trees, houses, chairs, etc., on the occasion of sensory stimulation."

Perception is not used here in the sense employed by early modern philosophers such as Bacon, Descartes, Spinoza, and Leibniz.

As one of the five khandhas (Aggregates) saññā is used in the sense of perception.

Could it be that memory is due to this saññā?

Saññā, viññāna and paññā should be differentiated from one another. Saññā is like the mere perception of a rupee coin by a child. By its whiteness, roundness and size it merely recognizes the coin as a rupee, utterly ignorant of its monetary value. A man, for instance, discerns its value and its utility, but is not aware of its chemical composition. Viññāna is comparable to the ordinary man's knowledge of the rupee. Paññā is like the analytical knowledge of a chemist who knows all its chemical properties in every detail.

Not the answer you're looking for? Browse other questions tagged pali-canon consciousness pali-language pali new-age-buddhism or ask your own question.

-1
If consciousness is a Reification, how does a Buddha attain the Truth?

3
Is "The body never lies" supported in the suttas?
2
Suffering due to non-self-related preconceived notions in Theravada