Can we apply the bundle of reeds simile to all limbs of Dependent Origination?

Can we apply the bundle of reeds simile to all limbs of Dependent Origination?

The sequence represents progressive development of dualistic thinking (dualistic hardening) down the chain that creates the concept of one's own death. You see, dualistic thinking is thinking based on discrimination between left and right, top and down etc. - it's a type of thinking that involves defining a reference point (the zero point, e.g. between up and down) and some sort of quality or criteria for separation (up/down, inside/outside, beautiful/ugly etc.).

In pratitya-samutpada each pair of adjacent steps represents one act of dualistic separation or co-definition. Each pair splits the world in two, along one dimension and creates foundation for the next split. We are talking about developmental psychology of mind here.

Samskara is a cohesive collection of memories or imprints that are accumulated one-by-one in such a way as to be logically consistent, in such way as to create some sort of consistent interpretation or experience of what's going on.

This collection of observations supports emergence of Experience (Vijnana) which is really nothing but reification of Recognition (or Interpretation) of new observations in terms of internalized old observations. This act of recognition or interpretation makes it possible for the new observation to be added to the pile, consistently with what's there already. Therefore Samskara enables Vijanana and Vijnana enables Samskara.

Recognition involves recognizing patterns like objects and situations, or generalizing significant features into identities. Therefore by its very nature Recognition is reification of entities. We define objects and give them names. This is called Namarupa. Recognizing objects (and places, situations) supports further development of Vijnana. So at this stage too, Vijnana supports Namarupa and Namarupa supports Vijnana.

The notion of objects arises co-dependently with the notion of their background or space in which they exist. Because there are six types of objects, there are correspondingly six types of space. This is Salayatana. So Namarupa and Six Spaces support each other, fall out from each other. The world, once again, is split in two: object and its background. 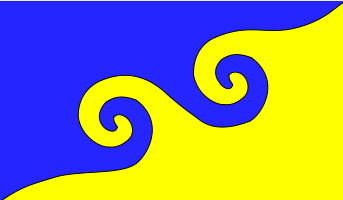 By this point the dualistic process progressed far enough to have a pretty rich differentiation of the external ("world" with "objects"), but there is pretty much nothing differentiated on the inside yet. There is also no experience of Time yet. But now that there are six spaces with corresponding sets of objects, there can be experience of a known object re-appearing after a period of being absent. This experience is called Contact. It is made possible by everything that happened until this point, but particularly by the notion of space as the background on which the object appears. The world is split along the dimension of time, into the time without the object and time with the object. This notion of Contact (having the object) makes the absence of object event more noticeable, thereby re-supporting the Six Spaces.

Now that we have identified the time when object is with us as significant, we notice the Feeling we have when the object is present. We attribute this feeling to the Contact with the object. This feeling in its turn re-enforces experience of Contact as something real and significant.

This Feeling at the time of Contact makes for a striking contrast with the time of No Contact. Obsessively remembering the Feeling of Contact during the time when the object is not with us, because the impression it left on us was so strong and fit so well with the pile of Samskara, is called Tanha or craving. This craving re-enforces the feeling we have when the object comes back.

Obsessive craving for Feeling/Contact/Object leads to obsessive thinking and fantasizing about it, Upadana. We tell ourselves a never-ending narrative, we replay situation over and over again, we make a little movie in our head about the Contact. We develop a plan of action to get what we want. This narrative/movie/plan is nothing but re-constructing a possible sequence of events from our pile of Samskara, events that could lead to the desirable Contact again. This process of obsessing over the object of our desire serves to re-enforce Craving.

Fantasizing about the contact leads to an idea of ourselves existing in different points in time. First we exist here-now, without the object. Then we will exist there-then, hopefully with the object. This splits the world into the background of Time and the Self-Identity (Bhava) traveling from past to future over time. It also re-enforces the entire experience of the World with Objects that we have thus constructed. The concept of "I" is the mirror reflection of the entire world that we have created, and thinking about one side reinforces the other.

Finally, as soon as we have defined a part of the world as something separate and concrete, an object living in this specific form - the change of form is seen by us as destruction. And since we identify with this object as "I", its destruction is seen as our Death, and anything that disturbs our idea of life-as-it-should-be is seen as this sentient being's suffering.

This entire structure is possible because of the fundamental Ignorance of how all this works. This ignorance permeates and supports the 11 nidanas, while the personal drama that comes out of it reinforces Ignorance, supporting the process of accumulation of observations, interpretation, and reification that leads to arising of the world and I, living and dying.

For more information, see Nanavira Thera's Notes on Dhamma and Buddhadasa's book "Practical Dependent Origination" a short summary of which can be found here: http://www.dhammatalks.net/Books6/Bhikkhu_Buddhadasa_Paticcasamuppada.htm

Is this the Theravada view? Why it does not say like this in Sutta.

If you're asking whether there are other examples in the suttas, then I guess that no there aren't.

Piya Tan's essay on Dependent Arising identifies several forms of the formula: e.g. there's one form with 12 nidanas, another with 10, and so on.

The same essay also references various other forms from the suttas.

He does see fit to start though, with:

Dependent arising is essentially an account of the causal nature of the cycle of existence (vaṭṭa), showing the conditions that hold together the wheel of birth and death, and make it turn from one existence to another. It shows how all existential conditions arise, not singly, but as a meeting of causes that bring about a set of effects—and that there is no first cause or prime mover: it is all cyclic. And it is a cycle that can be broken, when we know where the weak links are.

The Commentaries define dependent arising as the arising of effects evenly in dependence on a meeting of conditions (paccaya,sāmaggiṁ paṭicca samaṁ gantvā phalānaṁ uppādo). This implies that no single cause can produce a single effect, nor does only one effect arise from a single cause. Rather, there is always a set of causes giving rise to a set of effects.

In the well-known 12-link formula [diag 3.3], when one cause is stated as conditioning the following effect, this is merely to single out the chief condition among a set of conditions, and relate it to the most important effect among a set of effects.

This isn't exactly what you were asking, but...

Piya Tan's essay (referenced above) also identifies several explanations by several authors (which may or may not be mutually contradictory) of the cycle -- e.g. including whether the process describes one though moment, one life, or several lives.

The introduction (pages 107-108) suggest this is a topic on which people disagree, and write as if they're sure of their own view. I gather people become accustomed to arguments about this topic.

My own opinion, if you want it, is that the description is quite approximate:

I think that Andrei's answer (i.e. "yes") is a useful and "true" description -- even if it isn't in the suttas.

Note though that he describes the two-directional (i.e. backwards) relationship as "B is a re-enforcement of the previous step A" -- that's not the same as the forward-direction relationship, i.e. "A is a necessary condition for the next step B".

I think this kind of "loop-back" (where the result also affects the cause) in a relationship is sometimes called a "feedback loop" ... and when it's "positive" feedback (as it is in the example of "fire and heat") then it's a "self-sustaining" feedback loop, sometimes also called a "vicious cycle".

The fact that samsara is persistent seems to me evidence that there are feedback loops operating.

I guess a reason why that's not in the suttas is that it's not entirely useful knowledge. For example, knowing that fire reinforces heat is kind of interesting but doesn't really help to put the fire out, because there's no practical way to remove the heat from the fire. The practical knowledge (towards putting out the fire) is (only) that you can remove fuel -- I suppose this is a reason why (only) the one-directional "A is a necessary condition for B" relationships are taught.

In other words, the suttas contain the minimum/simplest description that's needed to teach dependent cessation.

The slightly richer description which includes other relationships (e.g. "B reinforces A") may be helpful for understanding the system as it is and how it comes to be and how it's sustained.

Apart from its use pratityasamutpada in the I think that "co-arising" is a useful concept generally. People often ask "did A cause B or did B cause A?" when the true answer might be that they co-arise. Once A and B both exist and there's a relationship between them, they may both be affected by or even defined by the relationship and each other.

This only applies to consciousness and name-and-form. It does not apply to the other links of Dependent Origination. Please see this answer for more details on why this is the case.

The quote from Mahanidana Sutta (DN15) shows that this applies only to consciousness and name-and-form, and not the other links:

No, because for the other nidanas in paticcasamuppada, one factor is dependent upon the one prior for its arising.

Nama-rupa & vinnana are the exception to this rule, for they are actually co-dependent upon one another for its arising... hence the simile.

That Nama-rupa & vinnana are actually co-dependent upon one another for their arising is another fact showing why paticcasamuppada is not about reincarnation.

9
What is effluent?
4
How can Name-and-form be the cause and condition for the manifestation of the consciousness aggregate?

71
Is rebirth a delusional belief?
2
How to reconcile Mahayana ideas of "nama-rupa" with the Pali definition?
0
Understanding Saṅkhāra in dependent origination as *choices* of body, speech and mind?
0
When one enters and remains in cessation of perception and feeling during death where in 31 planes of existence will he go to?
1
Does the dependent origination leads to becoming? If so, will then the reversal of the same i.e Dependent cessation brings the cessation of becoming?
2
If the chain of dependent origination (Pratītyasamutpāda) ends, then isn't the last part independent?