What are the Pali or Sanskrit words for these things?

I think I know some of these, but the rest are a translation muddle. The west seems to not attempt to translate nirvana, sangha, dharma, mantra, mudra, buddha, bodhisattva (and probably a few more) and that for me is actually helpful. I expect that some of these correspond to multiple Pali/Sanskrit words.

Meditation. This word predates the west's contact with Buddhism. I have no idea what non-Buddhist baggage it brings along.

Soul. Seems like this is atman, but everyone seems determined to call it something like "self," which is for a man-in-the-street just a reflexive pronoun. (Does the self exist? Well, as much as any other pronoun, like "he" or "they")

Reincarnation/rebirth. Synonyms in man-in-the-street's English, but I've seen people argue passionately how Buddhism believes one but not the other, sort of like believing in leasing but not renting (which are synonyms).

Repentance. I know for sure this is a big deal in Chinese Buddhism.

Pure/Purity. Means scrubbed clean of earthly dirt. I know this is a metaphor, but somehow, after 2000 years it falls as flat as if I tried to use a computer metaphor to explain to a 500BC farmer how the brain and cellular DNA works.

Heaven/Pure Land. Sukhāvatī comes to mind, but I'm not sure if this is a specific pure land, or the jargon for pure lands in general. Again, 'pure' makes it sound either homogenous or really well scrubbed, like a hospital. I'd rather just use whatever jargon word the originators used.

Deity. This in man-in-the-street English mean a god, or God, just like the one's the Christian's pray to. In Vajrayana, people seem to argue that yidams are something else. 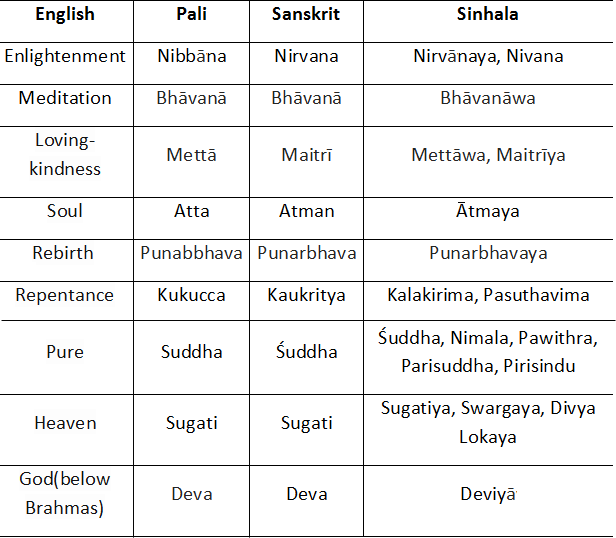 There are many synonyms to the words given in the table. Only mentioning some of the popular words.

Not the answer you're looking for? Browse other questions tagged terminology or ask your own question.

9
What are the three marks of existence?
3
What is the appropriate use for the term bhante?
6
What are 'suttas of indirect meaning' in the Pali canon?
1
What is the 'key' to these tantrika works?
4
What is the difference between "Bhāva" and "Ātman" in Pali
7
What is the name in Pāli and Sanskrit for the ‘body scanning’ meditation technique?
2
The pali word for this concept
3
Sanskrit term for a "Buddhist"
2
Do the words Sacred, Divine and Spiritual have any context in Buddhism?
1
Sanskrit and Pali roots